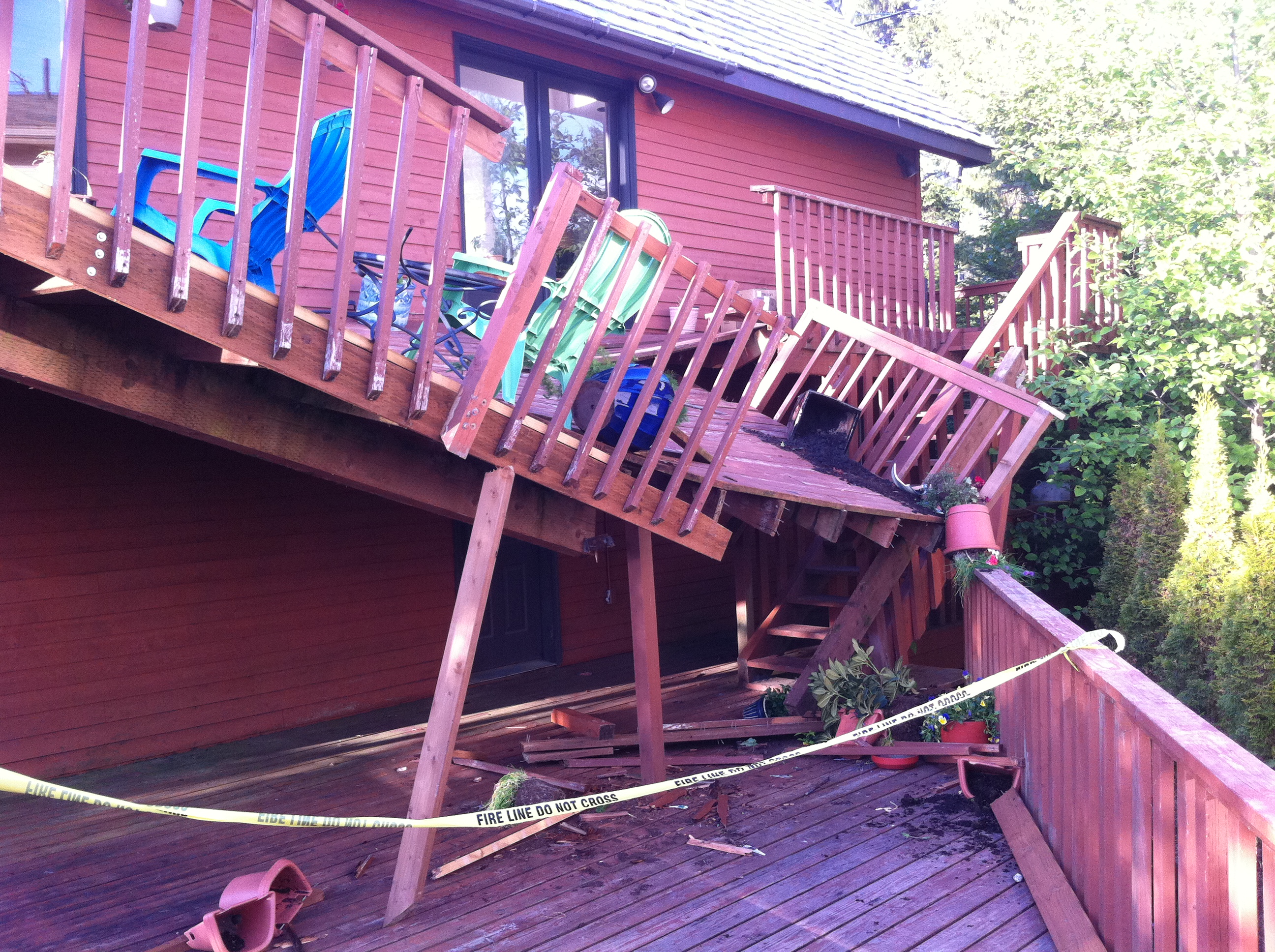 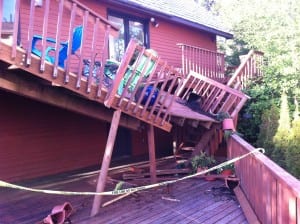 The collapsed deck on Halibut Pt. Road. Building official William Stortz confirms that it was a failure of wood rather than hardware. (KCAW photo)

Sitka police, fire, and ambulance crews responded in force shortly before 7PM to a report that a deck had collapsed at Frontier Charters, in the 3900-block of Halibut Point Road.

The caller said 12 people had been on the deck, and at least one victim was unable to get up after the fall.

Fire chief Dave Miller said he deployed just about everything he had, just in case.

“When a call initially comes in on a deck fall — you read about it all the time in other places where there are serious injuries — you just really never know what to expect when you get there.”

It was a bad accident, but could have been much worse. Charter clients were posing for a photo on the second-story deck when a support beam gave way, and the deck dropped like a drawbridge on to the ground-floor deck just below it.

Miller says ambulance crews transported one person immediately to Sitka Community Hospital. A second patient was assessed by EMS crews and taken to Mt. Edgecumbe Hospital about 15 minutes later. One or two people may have sought care later using vehicles belonging to the lodge.

“The owner, I spoke with him last night. He was on the deck posing with his clients and he described it as a surreal experience. He said it seemed like slow-motion but he was sure it was much quicker than that — and I’m sure it was. But again, it wasn’t just a pull-the-rug-out-from-you. It was an angular collapse, I guess you could say. Probably pretty darn quickly I would say.”

Stortz says the deck was probably built about the same time as the house, in 1985. He believes the failure was due to rotten wood where the deck beams connected to the support post. He’s not sure what kind of weatherizing treatment the wood had. 30 years ago there was a variety of treated lumber available, all of it with different life expectancies.

Stortz says that, given the number of houses built in this period, double-checking the health of decks is not a bad idea.

“In my opinion it behooves anyone to take a good, sharp look at stairs and supporting structures and see if anything looks amiss. Are the hangars rusted away? Does the wood look punky? If you’re not qualified to do that and you wonder about the conditions of your structures you can ask a friend who’s a carpenter or hire a home inspector.”