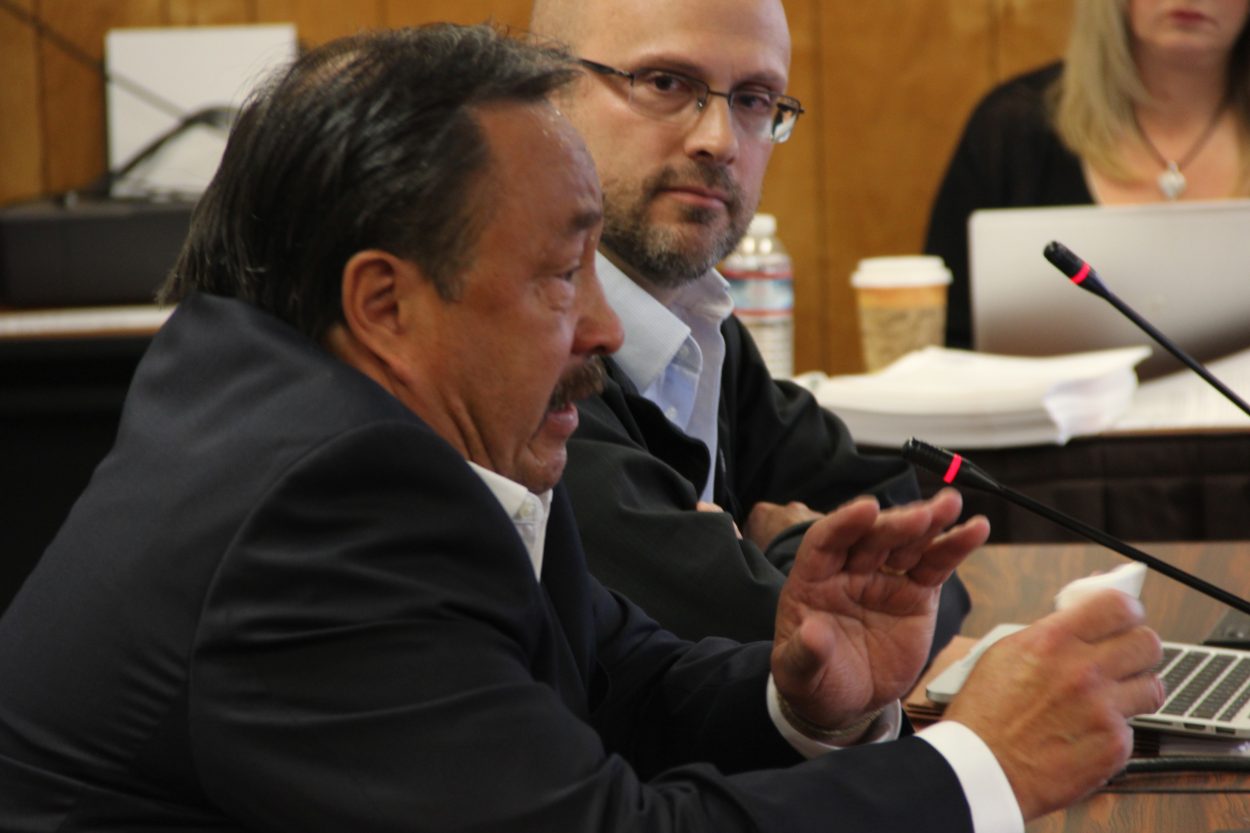 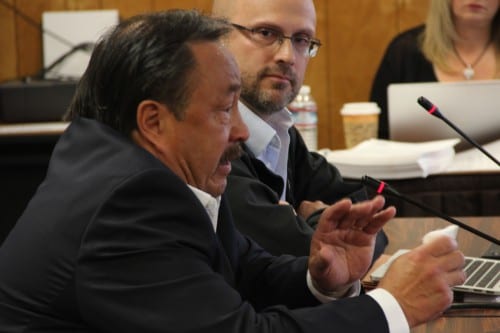 Simeon Swetsov, Jr., left, the mayor of St. Paul in the Pribilof Islands, choked up as he testified before the NPFMC advisory panel. Beside him is Mateo Paz-Soldan. (Rachel Waldholz/KCAW)

Emotions are running high as the North Pacific Fishery Management Council considers a proposal to reduce halibut bycatch in the Bering Sea.

Halibut fishermen are pushing the council to reduce how much of the fish can be taken accidentally — and discarded — by boats targeting other species. Meanwhile, trawlers and others say they’ve already reduced bycatch voluntarily, and lower limits would be ruinous.

The council got a preview of public sentiment during testimony before its advisory panel this week.

The North Pacific Fishery Management Council is meeting in Sitka through Tuesday (6-9-15). You can find links to the the full agenda here and listen online here.

About 150 people have signed up to testify before the council on the issue of halibut bycatch. Many sharpened their arguments before the council’s advisory panel earlier in the week. That panel, made up of industry representatives, ended up reccomending the council cut bycatch caps by up to 45% for some gear types.

Retired Sitka longliner Carolyn Nichols told the panel she worries that if the Bering Sea groundfish fleet continues to take bycatch at current levels, it will endanger the halibut stock — and the future of halibut fishing.

“There are a lot of kids here, like my son, who’s taken over the boat,” she said. “[They ask,] ‘Why should I buy halibut quota? Because they’re just going to take it away from me when it goes down.'”

Commercial halibut fishermen have seen big cuts to their catch limits, as halibut biomass has declined over the past decade.

Nichols pointed out that Canada has managed to cut halibut bycatch significantly. On that point, she was challenged by panel member Patrick O’Donnell, of Kodiak.

O’Donnell: Do you understand that the Canadians reduced from 122 vessels down to 55 in part to accomplish the reductions? And the effects that would have on displacing processing crew, captains, and boats in the Bering Sea?

Nichols: Are you aware of the effects it’s going to have if the directed halibut fishery, the sport fishery, the charter fishery and the subsistence fishery goes down the drain in all of Alaska, Washington Canada and California?

John Nelson, captain of the Bering Sea flatfish trawler the Rebecca Irene, said his fleet isn’t getting credit for the extensive measures they’ve already put in place to avoid bycatch. That includes changing when and where they fish, and using nets that allow larger halibut to escape.

“There’s not a magic bullet here. The increments are going to be small at this point,” Nelson said. “We can make improvements. But it’s getting harder and harder. We’re really using all the tools at our disposal.”

Nelson said a 50-percent cut in the bycatch cap would force his fleet to shut down part of the year, and crewmembers would lose their jobs.

That’s already happened to halibut fishermen, said Sitkan Frank Balovich. Longliners like him have absorbed big cuts, he said. It’s time for the groundfish fleet to take theirs.

He was echoed later that afternoon by Heather Mann, of the Midwater Trawlers Cooperative.

Mann said her fleet has reduced halibut bycatch to below 1-percent of their catch. She had a question for those who say they can do better: “How? How in this situation can the trawl catcher vessels in the Pacific Cod fishery do better?”

Meanwhile, for Simeon Swetsov, Jr, the mayor of St. Paul in the Pribilof Islands, it’s a matter of survival. In the Bering Sea around St. Paul, more halibut was taken as bycatch in the past few years than was caught by the commercial halibut fleet. If current trends don’t change, halibut fishermen in his region face being shut out of the fishery entirely. Swetsov choked up, talking about the impact.

“I’m extremely angry that we’re here today,” he said, before having to pause to collect himself. It’s a matter of justice, he said.

“We live right out in the richest ocean in the world practically, and we’re going to see this happen to us, in our own backyard? No! We’ll fight it!”

That fight continues. The council is expected to vote on halibut bycatch this weekend.