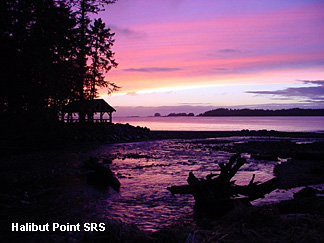 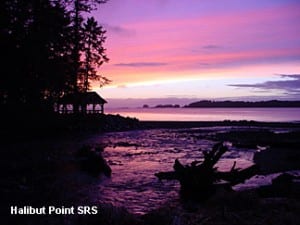 Sunset from Halibut Point State Recreation Area in Sitka. This park — like others in Sitka — will transfer into private management on July 1.

After a long spring of talking about statewide budget cuts, Alaskans are starting to feel some of those cuts on the ground.

In Sitka, the state Division of Parks and Outdoor Recreation is preparing to close Castle Hill, Halibut Point Recreation Area, and the Old Sitka boat launch on July 1 if no other entity can be found to run them.

The division has broadened its search now to include the public. Last week it issued a formal Request for Proposals for anyone — that means anyone — to take over.

“Anything above putting plywood over the doors and locking the bathrooms is an improvement. So that’s why the request for proposals doesn’t say you must do it exactly the way we’ve done it.”

Mike Eberhardt is the superintendent of Southeast area state parks. This year’s budget cut Sitka’s one state parks employee. That means, if no one steps up, the parks will go into passive management: No toilets, no trash removal, no regular maintenance. Eberhardt says they would basically be “vacant state land.”

So the state wants to contract out a service it has provided in the past. This is nothing new. Except, Eberhard says, for one slight hiccup.

“We don’t have the money to pay someone to do this activity, which is normally when you go out for a proposal you say, Well I’m going to give someone $5,000 to build me a shelter or something. But in this situation we’re saying, We don’t have any money, what can you do for us? And so the burden is on the applicants to find a creative way to come back with options to us for them to make it work.”

That could change, however. While fees for launching a boat or using a picnic shelter are capped by state law, Eberhardt says a private person or organization could beef up the fee-generating capacity of these sites.

“The success story here would be someone coming in who has the drive to get the picnic area active and do lots of events there and draw people to it, because they love Sitka and love Halibut Point. Same thing at the launch ramp.”

Private management of state recreational facilities is a common practice in many parts of the country. One of the more notable sites in Alaska is the Chena (“cheenah”) Rec Area in downtown Fairbanks. Eberhardt says a change in management is usually precipitated by the kind of crisis Sitka’s parks are facing right now.

“We have had situations in the state where we’re trying to close down a campground, and somebody who lives nearby and loves the facility steps up to bat and they don’t get rich off of it, but they perform a public service similar to us and they make a fairly good living wage off of it.”

Proposals are due by Wednesday, June 24. The new manager would be able to collect any fees for daily parking, shelter reservations, and boat launches. To see the RFP, click here: http://dnr.alaska.gov/parks/misc/sitkadistrfp15.pdf