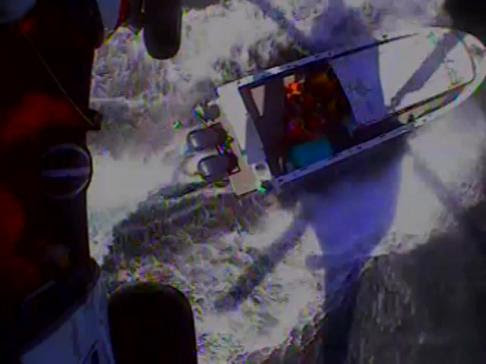 A Coast Guard helicopter crew rescued a man from a fishing vessel in Gilmer Bay, on the west side of Kruzof Island Monday afternoon (6-29-15). The man was reportedly suffering from stroke-like symptoms.

Coast Guard headquarters in Juneau received a call around 1 p.m Monday from a different boat, passing through Gilmer Bay. From their boat, the callers saw the man, on the 35-foot fishing vessel Ocean Storm, was in need of medical attention.

Coast Guard spokesperson Lauren Steenson says a good samaritan on that boat provided immediate assistance to the fisherman, who is described as a man in his late 60s.

“Someone with medical experience who confirmed that he was suffering from symptoms of a stroke,” Steenson said.

They then called the Coast Guard, which dispatched a crew from Air Station Sitka, just 19 miles away.

“They launched one of the MH60 Jayhawk helicopters, and ended up hoisting the man into the helicopter, and delivered him to emergency medical personnel at air station Sitka,” he said.

This is video of the Coast Guard hoisting the fisherman into the helicopter from his fishing vessel.