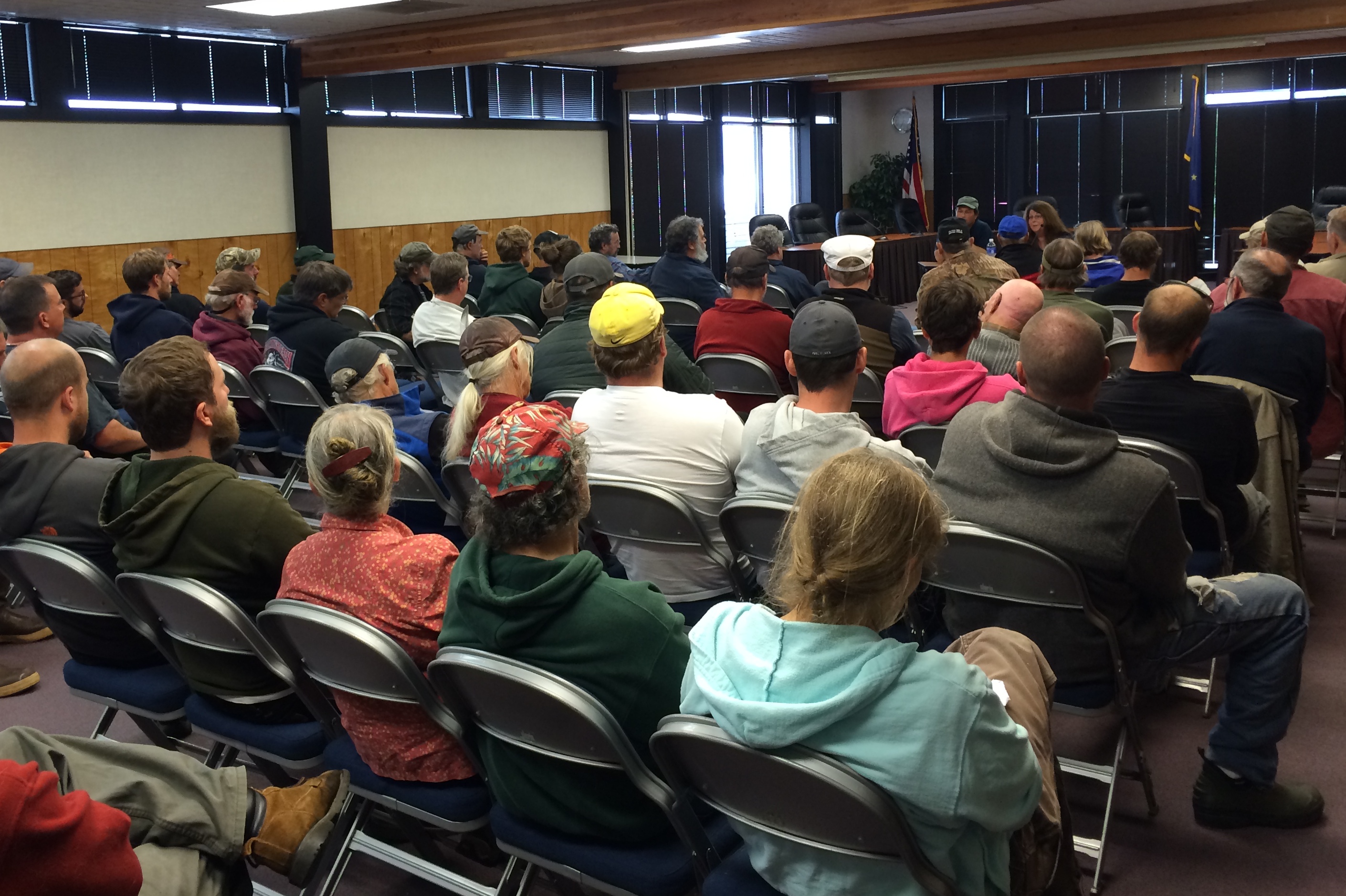 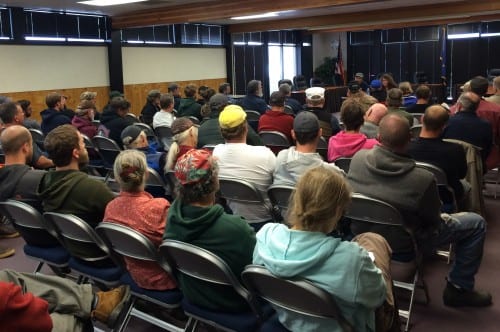 About 70 people gathered in Sitka’s Harrigan Centennial Hall to hear from Dale Kelley, of the Alaska Trollers Association. (Rachel Waldholz/KCAW)

Harbors emptied throughout Southeast this week (7-1-15) as fishermen headed out for the beginning of the summer troll season. July 1st marks the annual start of the summer’s first king salmon opener — the most lucrative time of the year for many trollers. And signs point to a banner year for king salmon.

But Southeast fishermen say they’re not getting their fair share of those kings. The State of Alaska has been locked in a fight with its neighbors to the south over how many fish the fleet can catch.

For now, at least, Alaska seems to have lost — and that has led to calls to change the system.

It’s been an uncertain, unsettled spring for many Southeast salmon fishermen.

“It’s been real frustrating because nobody knows what’s going to happen, and usually by now, the quota’s been announced two months ago,” said Sitka troller Bert Bergman.

That would be the annual king salmon quota. Usually, fishermen have two numbers in hand before the summer season starts: an estimate of how many kings are out there, and how many they’re allowed to catch. This year, with the season already underway, they don’t have either.

“Nobody knows how many fish we’re catching, or why the number’s low, or how we got this way,” Bergman said. “And basically, we’ve had to guess, and dock rumors have ruled the day, instead of reason and facts.”

That uncertainty came from the Pacific Salmon Commission, which implements the U.S. – Canada Pacific Salmon Treaty. Each year, the commission has to come up with an estimate of king salmon abundance, determine how many kings Alaska fishermen can catch, and decide how many will pass on to Canada, Washington and Oregon. But this year, the Commission deadlocked over those figures — leading to months of wrangling. Days before the summer opening, fishermen weren’t sure they’d be fishing at all.

Finally, in late June, the Alaska Department of Fish & Game announced that it would open the summer king salmon fishery, and it would be managed assuming low king salmon abundance. But the state explicitly said it believes that estimate is wrong.

“I wouldn’t say that we chose this course of action,” said Charlie Swanton, Alaska’s representative on the salmon commission. He said Alaska was backed into a corner after representatives from the Pacific Northwest and federal government threatened to take the state to court.

But, Swanton said, it’s not the end of the conversation.

“It’s hardened my resolve to turn around and find some solutions,” he said. “Such that Alaskans get their fair share of the fish that migrate by our coastal communities.”

Alaska believes the model used by the Commission is deeply flawed. Last year was a huge year for king salmon in Southeast, and the winter troll fishery was also strong.  Meanwhile, forecasts are calling for major returns to the Columbia River basin. All of that suggests a big year for chinook, Swanton said.

But even though Alaska didn’t win any concessions this year, the Commission has agreed to revisit its model before next year’s fishery.

“We’ve had thirty years of trying to pay for the sins of the south on habitat destruction,” she said. “We’ve cared for fish and repeatedly made sacrifices on behalf of our industry and the region just to rebuild runs that are through the roof.”

And now, she said, Alaskans should be benefitting from those rebuilt stocks. She said trollers don’t mind taking fewer fish in years of actual low abundance. But she warns that when the model isn’t reliable, it undermines the entire management system.

Though the Department of Fish & Game hasn’t announced a quota, Kelley fears Alaska fishermen — commercial and sport — will be allowed about 237,000 kings this year, down from nearly 440,000 last year.

“They’re just busting our chops with this quota, this up and down thing,” she said. “There’s no sustainability, no sense of security that they know what they’re getting year to year.”

“I’ve never seen as many king salmon in the ocean as I’ve seen now, and I’ve got four generations of trollers in my family,” he said. “To not get part of that fish when we’ve made all the sacrifices to help rebuild the runs, and we help pay for the hatcheries, and then to not get some of that feels like we’ve been sold out by the southern states and the National Marine Fisheries Service and NOAA.”

But for now, he says, he’s got no choice. Whatever the quota is, he’s fishing it.

“I’m gonna just take a lot of ice and listen to the radio and see what happens,” he said.