With the state in the throes of the most significant budget crisis in its history, Sitkans may be surprised to see ground broken next spring on a multi-million dollar project.

The Mt. Edgecumbe High School Aquatics Facility is on track for construction beginning next year, and completed by 2017.

As KCAW’s Vanessa Walker reports, the new swimming pool was funded in part by Alaska voters and the money — at least for construction — remains unaffected by the cash squeeze in Juneau.

The facility is designed to be a 24 to 25 thousand square foot building–that’s about half the size of a football field– with a 25 yard pool and other amenities inside.

It will be located near Mt. Edgecumbe High School, where a WWII powerhouse used to stand that was demolished in 2013.

The pool will serve a wide range of users. Mt. Edgecumbe students will have access to a pool right next campus, and there are also plans to build a therapy area that can be utilized by the medical community in Sitka. 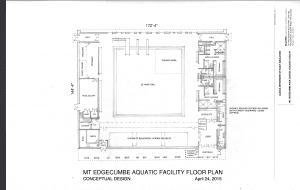 It will also be used as a training area, says Travis Miller, he is a Project Manager in a division of the the Department of Transportation and Public Facilities, who is overseeing the project.

“There’s a trooper Academy in Sitka, and also the US Coast Guard station, both of those entities do deep water and high-risk rescue, and they were hoping to have a facility where they can do some initial trainings,” Miller said. “So they asked for a 10 meter diving platform, we’ll also be providing them storage space so they can store a lot of the equipment that they’ll be using to train their members,” he said.

This new facility was partially funded back in 2010, when Alaskans voted to put state funds toward large construction projects at schools, libraries and other research and learning institutions. The aquatics center was also funded by state budget appropriations.

However, seven years is a long time between a voter-approved bond package and a final product, so it’s no surprise that the fortunes of the state might have changed in the interim.

During a Sitka Chamber of Commerce meeting in late June, Senator Bert Stedman said the project is still on track. The DOT is now working with an Anchorage-based construction company to build it.

He says he’s faced a few setbacks while pushing to get the facility built.

“The biggest hurdle I found wrestling with this swimming pool project is the operating costs. If it was in Anchorage, it would have been built very quickly after the appropriation,” Stedman said. “But there’s some political hurdles you get to participate in when you are from rural Alaska. This pool has been stuck in the mud a couple of times, and we keep prying it out. It looks like it’s pried out now for the last time, and it should get constructed,” he said.

The project slowed when the facility had to be redesigned a few years ago. It was originally going to have a 50 meter, Olympic sized pool. But, there wasn’t enough funding for that. The pace picked up again after the it was eventually downsized to 25 yards.

But even though funding for the construction of the pool is secure, keeping it open will be challenging.

“People don’t have to listen to the news very much to find out that the state is trying to figure out ways to reduce costs, not add costs,” said Les Morse, Deputy Commissioner of the Department of Education and Early Development.

He says after the facility is built, it may cost around $720,000 per year to operate it. Some of those costs will be absorbed by user fees, but he says they’re doing their best to bring that number down, like by building a really sustainable facility.

“That’s actually a primary goal. If we’re getting the building built and we can’t operate it, that’s not very useful to us,” Morse said.

After construction is done, Stedman says the Mt. Edgecumbe students stand to greatly benefit from this new facility.

“It’s going to give them more recreation. Most kids come down from the Delta, Kuskokwim, the Yukon, they have high drowning rates up there,” Stedman said. “They have a very difficult time up there learning how to properly swim,” he said.

Stedman says he and his brother were both on Sitka High School’s swim team, and he anticipates they will both be there on the aquatic facility’s opening day in September 2017.