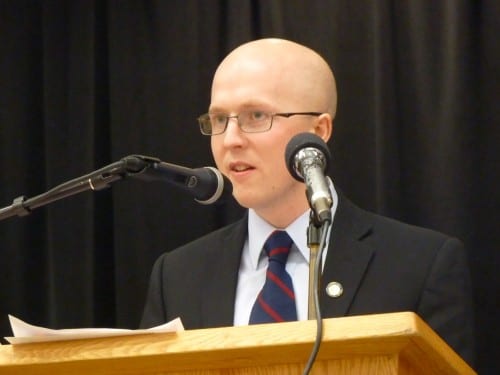 When all is said and done, Alaska’s budget for the coming year is a “fair deal.” That’s the verdict from State Rep. Jonathan Kreiss-Tomkins — despite the legislature’s knock-down, drag-out fight this spring, with two special sessions and a brief flirtation with a government shutdown.

KCAW spoke with the Sitka Democrat last week (6-30-15), and found him philosophical about the spring’s budget debate; eager for action on Medicaid expansion; and, in his words, “wonking out,” before the next special session, likely this fall — this time on a proposed natural gas pipeline.

Like pretty much everyone else in Alaska, Kreiss-Tomkins found this year’s legislative session more than a little frustrating.

That was largely because the various factions spent the better part of two special sessions haggling over a fraction of the state’s $5-billion operating budget.

That cavernous, consuming hole was the $4-billion budget deficit, filled this year by tapping the the state’s rainy day fund, the constitutional budget reserve.

And those couple of centimeters covered a few crucial — and ideologically fraught — issues: whether to maintain funding for education, for instance, and whether to honor union contracts with state employees. Those were both priorities for the House Democratic minority, of which Kreiss-Tomkins is a member. And on both issues, they carried the day.

Kreiss-Tomkins also points to successful efforts by Southeast lawmakers to roll back some cuts, including about $2-million added back to the state ferry system, and $250,000 added back to public broadcasting.

In the end, he said, everyone compromised.

“It felt fair, hard-fought, reasonable,” he said. “And I think those feelings describe what a fair deal feels like.”

Kreiss-Tomkins’ biggest disappointment was the legislature’s failure to expand Medicaid — or even hold a straight vote on the issue.

Kreiss-Tomkins called the moral and economic case for Medicaid expansion “overwhelming.” If the leadership in the House and Senate won’t bring it up for a vote, he said, it may be time for the governor to act on his own, and expand Medicaid — even without legislative approval.

“The legislature’s been given the football, and we, you know,  passed it around a little bit, maybe fumbled it a little bit,” he said. “We didn’t really take decisive action, it certainly never got a vote. And, in my book, that’s what you call punting (laughs).  So if you’re punting, you’re giving it to the other side, and I hope the other side scores a touchdown.”

Meanwhile, even as the dust settles from the most recent budget battle, lawmakers are preparing to fight it all over again. With oil prices still low, the budget for the coming year looks just as tough, and this time the legislature will be expected to confront the third rail of Alaska politics: whether to raise taxes or tap the Permanent Fund.

Kreiss-Tomkins has no specific proposals yet, though he’d like to revisit the state’s tax credits for oil companies. But he said any solution to Alaska’s budget crisis will have to be a “blend” of options.

In the meantime, there’s another major issue on the horizon. This fall, lawmakers are expected to gather for a special session on the proposed Alaska liquefied natural gas pipeline – or AK LNG.

“When the average person hears, ‘Alaska natural gas line,’ this static appears in their brain, because there have been so many proposals,” he said. “Short line, long line, big diameter, small diameter, through Canada, through Valdez, through Nikiski…”

But now might be a good time to start paying attention. Kreiss-Tomkins calls the current proposal “arguably the most serious” plan ever to come before the state. It may yet fail to materialize. But, he said, “if Alaska LNG happens, Alaska will change.”

“This is a gosh darn colossal project,” he said. “When dirt turns, or if dirt turns for this, it would be pretty much the biggest construction project in the world.”