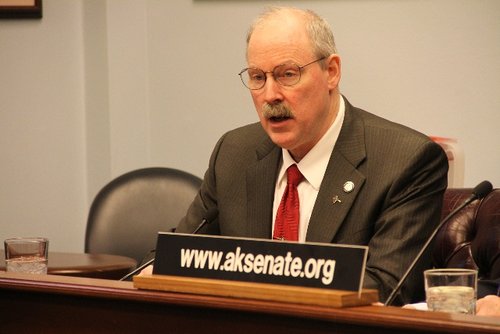 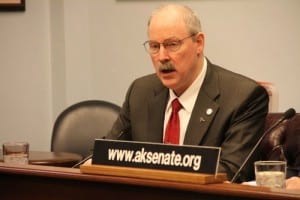 State Sen. Bert Stedman speaks at a press conference in 2014. He told Sitka’s Chamber of Commerce, “We don’t want to go to a vote of the people to make payroll.” (File photo)

The state’s budget for next year is settled, but Alaska’ budget crisis is far from over.

State Sen. Bert Stedman told the Sitka Chamber of Commerce recently that the operating budget is “messy,” and a serious effort to balance revenues and expenses should be made before the legislature turns to the Permanent Fund for help.

It was the usual legislative post-mortem for Bert Stedman, except for the first time in his 12 years in the senate, the state has not had the cash resources to drive spending through tough times.

To make ends meet, the legislature this spring liquidated one of its savings accounts, the statutory budget reserve, which it can tap with a simple majority vote.

Next in line is the constitutional budget reserve, which takes a vote of three-quarters of the legislature. There’s $16-billion in the CBR — but it won’t last long if Alaska continues to run up deficits of $4-billion or so. Getting to a three-quarters vote to balance the budget this spring took the legislature almost an extra 2-months.

Stedman put up a graph of the deficit, revenues, and the constitutional budget reserve, which was shown in blue.

“Well the world doesn’t end when the little blue bar disappears, because we’ve got this one last fallback before the house is really on fire and the discussion is, Have we reduced expenditures enough and what revenue enhancements are we going to have?”

That fallback is the Permanent Fund — not the $55-billion in principal, but the earnings reserve, $7- or $8-billion dollars in earnings that the legislature can spend at its discretion, also with a simple majority vote.

Since 1980, they’ve been passing along a sizeable portion of those reserves to Alaska residents as an annual check — the Permanent Fund Dividend.

Stedman was not making the case for using the earnings reserve; rather, he was making a case for not having to use it. One of those “revenue enhancements” he’s interested in is a gas line owned by Alaskans, rather than by creditors or the big three oil producers.

“Well our share if we get it — think of it just like the hotel here, an income property. You can go out and get 100-percent debt on your income property, who makes the money? Your buddy the banker, or in this case your buddy the bond issuer. So we need as a state to have an equity position. The bigger your equity position, the stronger your cash flow to the general fund, and back to the state. And I would argue that we should have an all-equity position in that gas line, debt it after it’s been turned on and we actually know what we’re dealing with, and then leverage the amount that’s in the best interest of the state. If you’re over-leveraged, you have no cash flow coming out, then we’re in trouble.”

But Stedman’s argument to the chamber was to look beyond political bickering to the bigger picture. Yes, Alaska’s railbelt legislators were unsupportive of ferries in Southeast; no, the same legislators would never lose sleep over state parks closing in communities like Homer, Valdez, and Sitka. He suggested that these disputes were distractions.

“Before you get lost down in the detail, you know, Should you have another $15-million bucks for the Marine Highway, or another position at DOT? You should just step back and look at the overall pie. Medicaid is $641-million, and takes 16-percent of our operations, year-to-year. K-12? $1.2-billion, 30-percent. All the other agencies, all the other good stuff we do, $2-billion, 53-percent. You can’t fix the pie without dealing with Medicaid, without dealing with K-12. Now, if you insulate Medicaid and K-12, the entire impact falls on the rest of the system. And you can see that that piece on the top is salaries and benefit increases, $29-million, which is a big chunk of money, but it’s .1-percent.”

Still, Stedman opposes deep cuts to schools. He said you can’t provide a group of Alaskans with a substandard education. “You can’t back up,” he said.

Stedman did not offer any specific solutions. This presentation was mostly to give his audience some context about what will be happening next year in the legislature. At the top of the list will be more debate over the Constitutional Budget Reserve, and the three-quarters vote of members to draw on it.

And there will budget cuts. In Alaska’s existing revenue picture, cuts never go away.

“Just to get out of bed in the morning to work on the budget,” Stedman told the chamber, “we have to cut $200-million. Just to stay even with last year.”