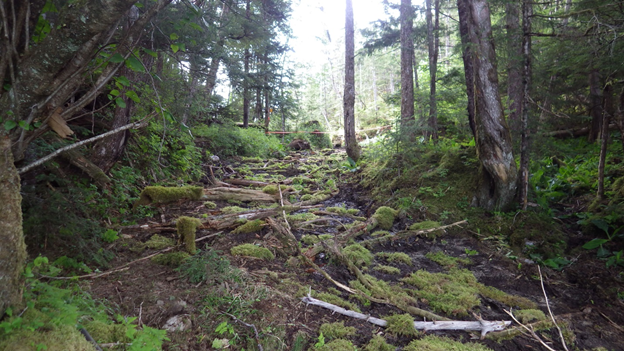 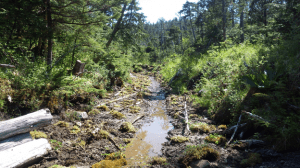 Although Alaska’s Gold Rush never really paid off in the Sitka area, that didn’t stop people from trying. On neighboring Chichagof Island, thousands of prospectors are thought to have combed the valleys and mountain sides looking for gold in the late 1800s.

Mining took place for the next one-hundred years or so. The last working stake on West Chichagof shut down in the 1980s, and reverted to ownership by the City of Sitka.

Now, Sitka is getting out as well. As part of the Blue Lake Dam hydro expansion, the city is trading its old mining property back the U.S. Forest Service in exchange for land flooded by the Blue Lake reservoir.

KCAW’s Vanessa Walker has been talking with people about the so-called “Boomer Land” trade, and filed this report.

Southeast Alaska was inundated with gold miners in the 19th century– and West Chichagof was a popular destination. Although mines never approached the size and wealth of Juneau’s Silverbow Basin or Douglas, there was enough paydirt to keep people interested.

In fact, at one time the West Chichagof mine and the community associated with it were bigger than Sitka.

“In the 1800s when people settled that area they probably came from all over the place, and you had a combination of small claims, people who were pan gold finders and speculators came up,” said Andrew Thoms, Executive Director of the Sitka Conservation Society. 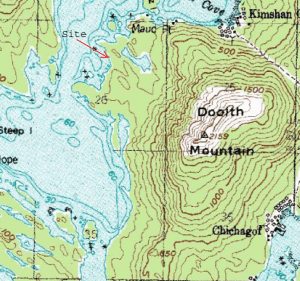 A map of Chichagof

Thoms said eventually companies came in and bought up smaller mining claims and began larger excavations. But in time, as the gold ran out, so did the people.

That was over 100 years ago, and West Chichagof is wild once again, except for a 48-acre tract of the Yakobi Wilderness– better known as the Boomer Lands.

The City and Borough of Sitka acquired the property in 1971, when the original land owners stopped paying taxes on it.

The city subsequently leased the area to an outside company, which eventually prospected the land for minerals in the 80’s and left the property badly damaged.

“The Boomer property that we’re talking about up there is not the whole mine area,” Thoms said. ” That is an inholding that somebody had as a mining claim, and they did work up there, and did some pretty bad damage up there while they were working that,” he said.

Now, Sitka is handing over the Boomer Lands to  the Forest Service, but it’s not a giveaway.

When the city raised the Blue Lake dam by 83 feet last year, the reservoir grew in size and flooded the surrounding U.S.-owned wilderness. In exchange, the Sitka-owned Boomer property on Chichagof is now being surrendered back into the Yakobi wilderness and into the hands of the United States.

Making the 48-acre plot wild again is no easy task. The parties in the land swap have worked out a clean-up plan, with the help of the Conservation Society.

“The person who owned it left a ton of trash up there, some of it was toxic, just stuff you can’t have out there in the forest,” Thoms said.

The clean-up project has been in the works for a while now. Crews had to remove old sheds, a camping trailer, a bulldozer and other wastes.

The Sitka Assembly authorized $79,600 for the Boomer clean up, which includes the cost of the junk disposal.

After the area was cleared, it was just that– empty, damaged land with no vegetation. 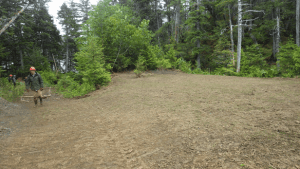 An area of the Boomer Lands that lacks vegetation. Photo courtesy the Forest Service.

“By the time the SCS and Forest crew got there, it was literally a case of trying to restore the hydrology of the site,” said Luke A’Bear, Conservation and Management Resident at SCS. “The water is just running down these roads, and not flowing where it should, stopping plants from regrowing on it,” he said.

The crew started by laying down mats of vegetation sourced from around the area on top of the bare rock surface. They put down woody debris and other organic materials to serve as a nursing ground for future plants and grass to grow. Channels were also dug in the area to reroute streams into their original channels.

“We spread a native Southeast Alaskan grass seed, because it will grow quickly and stabilize the soils,” A’Bear said. “We also transplanted little spruce seedlings and hemlock seedlings from the surrounding area,” he said.

The project is now in the hands of the Forest Service’s Alaska Lands Team. When the Boomer Lands are fully restored, they will be another area people can go to enjoy the Tongass.

“A lot of people from Sitka go up to West Chichagof,” Thoms said. “People really appreciate it because it’s wild country, you can go out and enjoy the wilderness and Alaska as it was before people were here,” he said.

The next time locals go up to West Chichagof for a deer hunt, there won’t be any worry of running across a dilapidated mining tractor.