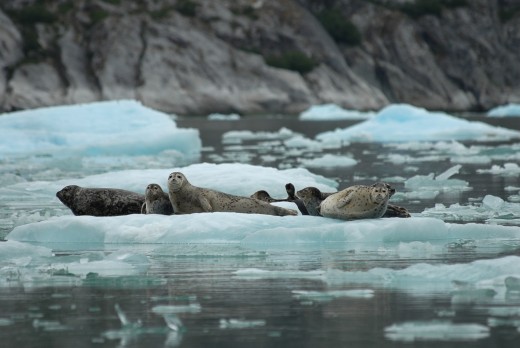 The marine mammals rest, sleep and birth their pups on floating ice. NOAA Fisheries says new research shows the marine mammals are much more likely to dive into the water when vessels approach the current legal limit.

NOAA spokeswoman Julie Speegle says that stresses the animals and lowers their chance for survival.

“They expend far more energy when they are flushed off the ice floes and that uses up their energy reserves and that’s very important if you’re an animal that lives in that icy environment,” she says.

The federal Marine Mammals Protection Act requires ships to stay about 100 yards away. New guidelines, which are voluntary, call for about 500 yards, if it’s safe to do so. 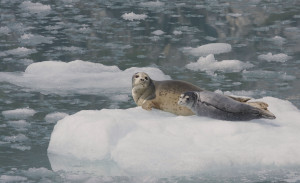 A harbor seal pup and its mother rest on ice at the base of Northwestern Glacier in Kenai Fjords National Park in June of 2011. More than 350 female seals with pups were spotted in the area. (Photo by Gregory “Greg” Smith/Creative Commons)

They also ask ships to be as quiet as possible, avoid causing wakes and make no abrupt course changes. They suggest vessels schedule tours for the early morning or evening, when fewer seals haul out.

“At this point, because they’re voluntary, we will be monitoring the vessel and seal interactions to see if these new voluntary approach guidelines provide sufficient protection for the seals,” she says.

NOAA Fisheries says its research shows about three-quarters of seals on ice dive into the water before an approaching ship reaches the current legal distance. Other studies found different numbers, but they still document significant disturbances.

The most popular fjords, in Southeast and Southcentral Alaska, see multiple visits a day.

“We certainly want to do all that we can to ensure that pups are not separated from their mothers during the nursing stage,” she says.