Peanut is a “hoot” at Raptor Center 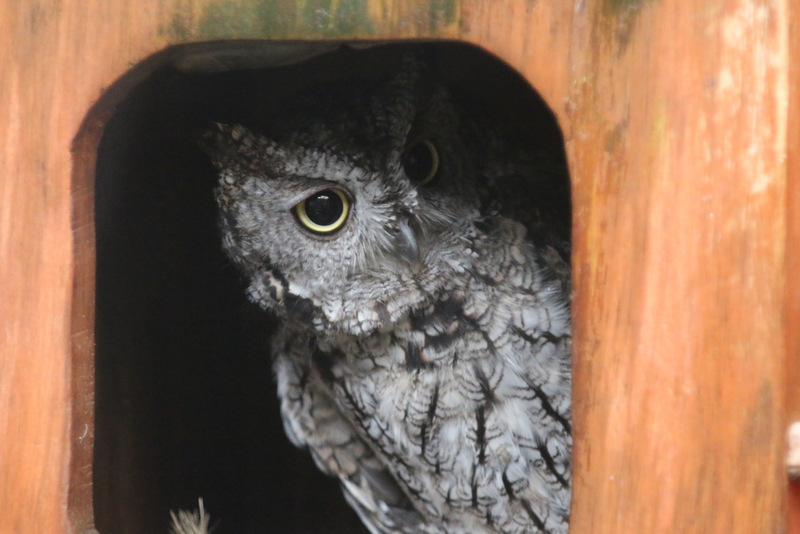 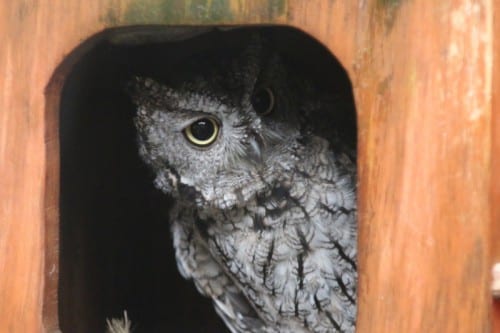 There’s a new bird in town, and she’s a little shy. After a long career in education, she doesn’t have a lot of patience for the classroom. But for the right student, she still has plenty to teach. These days, she’s settling into a comfortable retirement, just off Sawmill Creek Road– at the Alaska Raptor Center.

KCAW’s Vanessa Walker visited Peanut, and sent back this report.

On a cold and rainy day, a yellow-eyed, grey Western Screech Owl peers out of her small owl house in a cage at the Alaska Raptor Center. Her name is Peanut, and her right wing sticks out just a little further than her left. She’s injured and unable to fly. She used to live in California and at some point moved to Alaska. She was used as an education owl for years, but now she’s in retirement.

“We know she’s about 13 years old, which is really old for a screech owl. They usually live to be about 8 or 9,” said  Jen Cedarleaf, the Avian Rehabilitation Coordinator at the Alaska Raptor Center.

She says the center tried using Peanut as an education bird at first, but it didn’t work out.

“She just didn’t seem really happy with it. Since she’s so old we wanted to let her rest for the rest of her life, so she’s just in a static display out there,” she said.

Peanut arrived at the center in July, after a bird educational facility she lived at in Ketchikan shut down. Before that she belonged to a California falconer.

“She’s really enjoying, I think, not being an education bird,” Cedarleaf said. “She really seems to like her little habitat. She get’s around in there and doesn’t have to deal with people all day long,” she said.

Cedarleaf said Peanut has already laid 4 or 5 eggs–more than she estimates Peanut ever has.

On the day I came to visit, she was quiet and never stepped out of her owl house or let out even a tiny hoot. But Cedarleaf didn’t want her quiet demeanor to fool anyone.

“Peanut is a little beast,” she said.  “A lot of times she’ll try to run away from you, but sometimes she’ll come after you. It’s kind of funny because she’s so tiny, she can’t really hurt us that much, but she thinks she can,” she said.

Peanut is one of three screech owls currently at the Raptor Center and one of about 21 permanent residents, including bald eagles, red tailed hawks, great horned owls, and ravens.

Right now there are also more than 20 birds being rehabilitated, mostly bald eagles.

Cedarleaf says June was particularly busy, with an injured bird coming in almost every day. 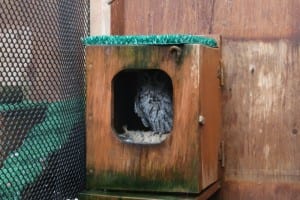 “It’s very possible she was hit by a car. Owls get hit by cars more often than you would think, because they use the headlights to help find their prey, and they’ll swoop in front of a car without realizing it, and then they get it,” she said.

Despite Peanut’s reclusive nature,  Cedarleaf says visitors stand to learn a lot from her.

She’s a very good bird for teaching us about longevity and just about the different kinds of birds that are out there in the environment that you don’t always see all the time,” she said.

It’s not every day you see a Western Screech Owl. However, if you’re lucky, Peanut may look your way the next time you’re at the Alaska Raptor Center.