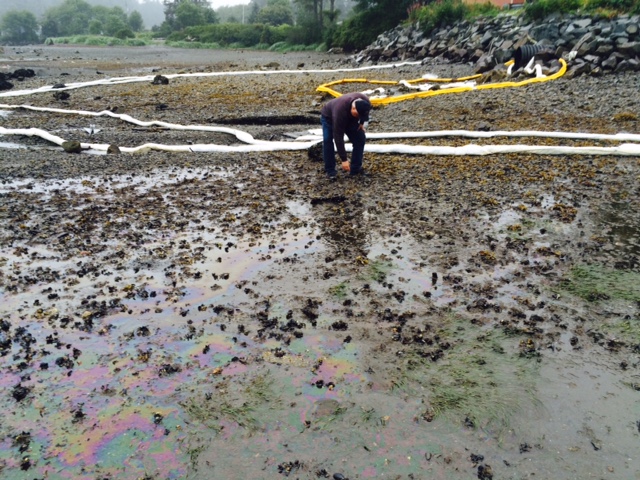 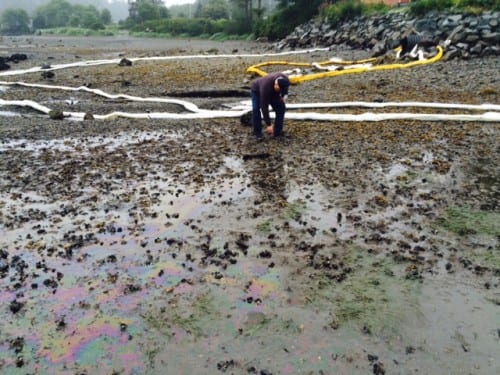 Officials are now estimating that about 2500 gallons of diesel spilled into Sitka Sound this weekend, after a fuel tank failed at the city’s Jarvis Street Power Plant.

That’s significantly less than the 7,000 gallons feared on Sunday.

By Monday evening (8-17-15), much of the spill had been cleaned up or dispersed — and officials were hoping that a storm would help finish off the rest.

Officials are reminding subsistence seafood gatherers to avoid the area between Indian River and Cannon Island. Residents are also encouraged to report any oiled wildlife immediately, by calling the Fire Hall at 747-3233 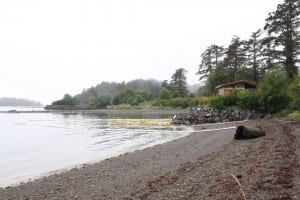 Eagle Beach at 2 p.m. on Monday, August 17. By Monday afternoon, the spill had been mostly mopped up and contained. (Rachel Waldholz/KCAW)

When it failed over the weekend, the storage tank at the Jarvis Street Power Plant released about 30,000 gallons of diesel. Most of that was caught in a cement containment enclosure designed for exactly this sort of event. But when responders pumped the diesel back into the tank on Sunday, they found about 7,000 gallons missing.

Some of that diesel leaked into the city’s storm water drainage system and spilled into Sitka Sound at Eagle Beach, near the mouth of Indian River.

But a significant amount likely evaporated — as much as 4,000 gallons, according to estimates from the Coast Guard.

Bob Mattson is the state’s on-scene coordinator for oil spills in Southeast. He works for the Alaska Department of Environmental Conservation.

“When oil is exposed to the air and the elements it undergoes a weathering process,” Mattson said. “A lot of it is lost due to evaporation — and of course people in Sitka know what the weather was over the weekend, had some pretty nice days, especially on Friday and Saturday. So we know that the amount of oil which actually evaporated is going to be significant — with diesel oil it is — but we won’t ever really know exactly how much.”

For now, officials are estimating that about 2500 gallons may have made it into Sitka Sound.

Mattson says he’s pleased with the city’s cleanup efforts so far. Coast Guard and city personnel laid absorbent material throughout the storm water system and on the beach on Sunday and Monday, catching and mopping up much of the spill.

By Monday afternoon, the only sign of the cleanup were several layers of containment boom in a small area around Eagle Beach. Mattson says what’s left is a sheen on the water.

“It looks bad,” he said. “But fortunately it’s a thin layer, and in terms of a volume, there’s not a lot.”

The spill is near Indian River and the Sitka National Historical Park, but speaking Monday afternoon, Superintendent Mary Miller said that so far, no diesel has showed up in the park.

“We swept the park first thing this morning to see if there was anything that was moving in our direction,” Miller said. “And not even any evidence, not any smell, not any anything. And so right now it looks like things are as good as could be expected.” 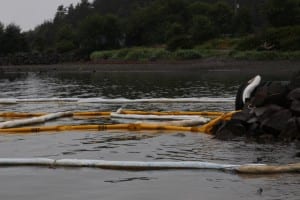 The diesel from the Jarvis Street Power Plant leaked into Sitka Sound through this storm water drain at Eagle Beach. (Rachel Waldholz, KCAW)

Officials say there have been no confirmed reports of wildlife affected by the spill. Subsistence users are being asked to avoid the area, but the Alaska Department of Fish and Game has determined there is no threat to commercial fisheries.

Officials are also anticipating some help from Mother Nature. Storms moving into the area this week are expected to help break down and disperse the diesel.

Mattson says that predicted rain means that Indian River will likely be running higher than usual.

“Any of the oil sheens that wants to move along there…into the mouth of Indian River will meet this big wall of freshwater and it will shove it back out,” Mattson said. “So that’s good, that protects the mouth of the river.”

Meanwhile, officials hope that wind and wave action will break down the remaining diesel so that bacteria in the water can take care of the rest.

Officials don’t yet know what caused the tank to fail, or why the oil leaked out of the containment area, though the investigation is focused on a faulty valve.

And Mattson says it’s too soon to consider whether there will be any fines or penalties associated with the spill. That often depends on how proactive the responsible party – in this case, the city — is during the cleanup. Sitka had actually staged an oil spill response drill this spring in almost the exact location of the actual spill.

For his part, Mattson says he’s here for the duration.

“I’ve got a one-way ticket to Sitka,” he said. “I won’t be returning to Juneau until I’m satisfied that things are good.”