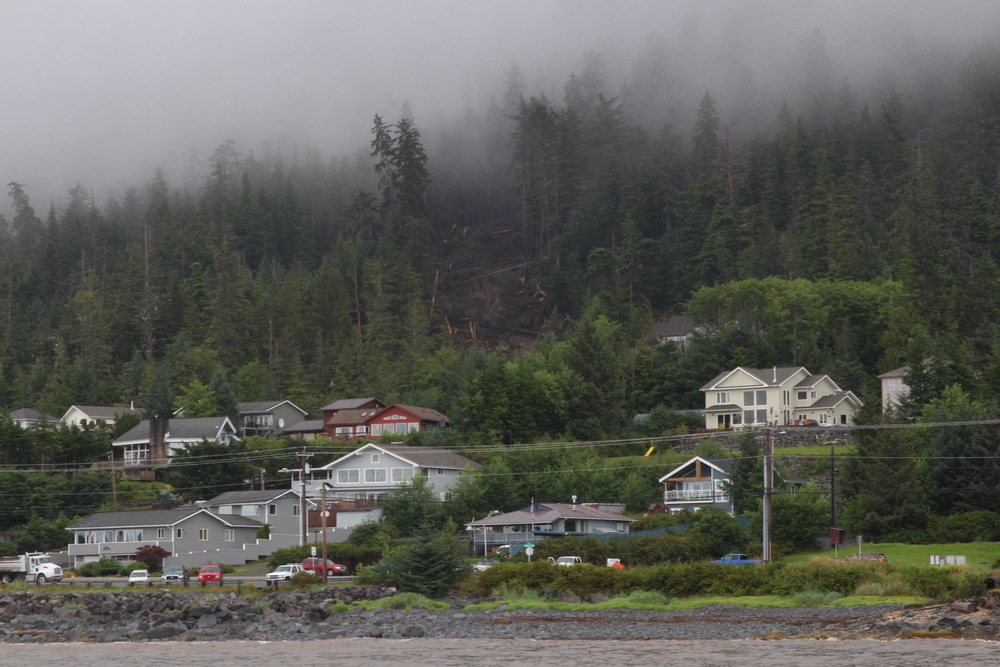 The early morning slide on Kramer Avenue, visible here in the center of the photo, destroyed one house and damaged another. (Rachel Waldholz, KCAW).

Governor Bill Walker plans to be in the city Wednesday to visit the affected areas.

All three were involved in the construction of several new homes on Kramer Avenue, about two miles from downtown Sitka. The slide in that area destroyed one of the new homes entirely, and damaged another.

The area remained unstable Tuesday afternoon and officials suspended search and rescue efforts for several hours, over fears of further landslides — though rescuers did manage to pull a dog alive from the debris. As of Tuesday evening, search and debris removal efforts had begun again, with plans to continue Wednesday morning.

The neighborhood below the slide was evacuated. Neighbors reported a second slide on the northern end of Kramer Avenue, in an area that hasn’t yet been developed.

Heavy rains triggered what now appear to be at least six landslides in Sitka Tuesday morning, prompting the city to declare a state of emergency.

In addition to the two on Kramer Avenue, a slide across Sawmill Creek Road heavily damaged the administration building at the Gary Paxton Industrial Park, Sitka’s former pulp mill site, about eight miles from downtown. No injuries were reported, but the building was evacuated, along with bunkhouses belonging to local fish processor Silver Bay Seafoods. Sawmill Creek Road was closed past the industrial park as crews worked to remove the debris.

A fourth slide was reported in a more remote area, on Harbor Mountain, closing Harbor Mountain Road. Other slides were reported at Green Lake, and along the Gavan Hill trail.

The National Weather Service recorded over 2-and-a-half inches of rainfall in the six-hour period between 4 a.m. and 10 a.m. Tuesday.

The flash-flooding prompted temporary trail closures at Sitka National Historical Park. And flooding in the parking lot of the Sitka Laundry Center on Halibut Point Road opened a sinkhole the size of a large van in the pavement, threatening two propane tanks, which were safely removed from the site.

The landslides have caused several road closures. Harbor Mountain Road has been closed above the first gate at the bottom of the hill. Sawmill Creek Road is closed past Silver Bay Seafoods. Near the Kramer Avenue landslide, the city has closed Sand Dollar Drive, Whale Watch Drive and Kramer Avenue itself.

Raven News will provide further updates as we get more information.