Sitka ‘landslide cluster’: Too soon to blame on changing weather? 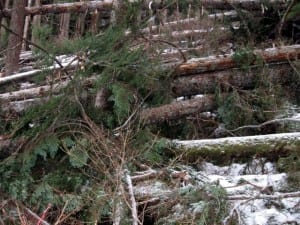 A blowdown at Beaver Lake in 2011 was the first in a recent series of weather-related slides in Sitka. (KCAW photo, Robert Woolsey)

The landslides that struck Sitka early Tuesday morning (8-18-15) are the latest in a series of similar events that started in 2011. Although these slides are triggered by a combination of wind and rainfall, forecasters believe it’s too early to correlate these incidents with changing weather patterns — but that may change.

KCAW’s Robert Woolsey spoke with meteorologist Joel Curtis, who happened to be in Sitka during the morning’s torrential rains.

In the weather forecasting business, you win some and you lose some. That was the case in Sitka Tuesday morning, and forecaster Joel Curtis realized he had blown the call.

“I did underestimate the amount of rain we were going to get here. I was thinking somewhere over an inch, and the last 6-hour total that I checked was 2.57 inches. So it’s really been coming down.”

That rain fell between 4 AM and 10 AM, triggering two major slides in Sitka — one of them possibly deadly — and several smaller slides.

Curtis is the Warning and Coordination Meteorologist with the National Weather Service in Juneau. He was in Sitka anyway for a training with the Coast Guard’s Air Station Sitka, when he got pulled in first to help manage a major fuel spill over the weekend, and now this.

And even though he’s not a geologist, he considers this type of mudslide to be an environmental event that starts with weather.

“Just a rough estimate: It takes about 15 miles per hour to start moving a tree trunk in the wind. And the more leaves that you have on the tree, or the branches or whatever that can catch the wind, the more movement you can get on the trunk. And so if you took some alder trees that were fully leafed out at this time of year and moved them around, you could actually get the roots moving pretty quick — and that’s just one disturbance in the soil.”

Other disturbances, Curtis says, include the freeze-thaw cycle — which doesn’t apply in this situation — and human activity, which does. Tuesday’s slide rolled right through a construction site, obliterating one new home and damaging another.

Whatever the trigger, the day’s slides were not isolated events. It’s been happening a lot lately. Curtis, though, is not pointing a finger — yet.

“This place is famous for large amounts of rainfall. So the fact that we’re having a warmer and wetter winter — and a warmer and wetter summer, if you will, because the pattern is already started — you look at that and say, Gosh there must be some correlation, because it’s happening with more and more frequency. But that also could be randomness and luck.”

Working backwards over Sitka’s recent slide history, there was the Starrigavan slide in September of 2014, which wiped out a huge area of the valley’s watershed, including an extensive Forest Service habitat project. A related weather event washed out the Herring Cove Trail and a section of Harbor Mountain Road. There was the Redoubt Lake slide in May of 2013, which buried a Forest Service recreation cabin after a Sitka couple narrowly made their escape; and there was the Beaver Lake slide in December, 2011, which toppled an old-growth forest along a popular trail. 400-700 year-old spruce trees were stacked like Lincoln Logs.

And these were just the events that affected people and made news.

“It’s at least somewhat elusive to say that, Gosh we’re getting into a high frequency pattern because of some particular environmental effect. But that being said, I would sure want to correlate that to amounts of heavy precipitation. And I think a statistical study might actually lend itself to that.”

Curtis says there just isn’t the science to support a conclusion between changes in weather and increased landslides — at least not at the moment. He says the University of Alaska Southeast Juneau Campus is planning to develop a landslide program, and he’s looking forward to seeing their data.

Until then the National Weather Service won’t be able to issue landslide advisories or watches, unless a landslide actually happens. “For the time being,” he says, “we’re more reactive than proactive.”

Update 10 PM, Tuesday, August 18 – Sitka officials now total the number of landslides today at six, including the major slides on Kramer Avenue and at the Gary Paxton Industrial Park.