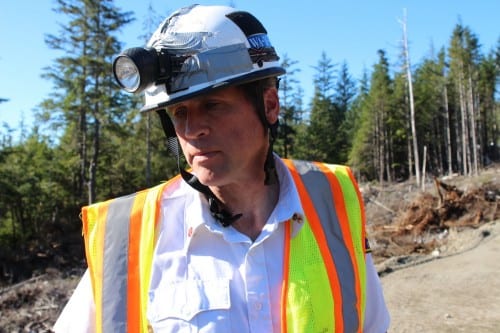 Seattle battalion chief Thomas Richardson. Despite his long hours on the Oso event he says he’s no expert. “No one is prepared for this kind of slide.” (KCAW photo/Robert Woolsey)

Among all the expertise imported by Sitka to aid in the recovery operation at the Kramer Avenue slide, one man finds this disaster hits very close to home.

Thomas Richardson is a battalion chief with the Seattle Fire Department. Seventeen months ago he stood over a similar scene in Oso, Washington.

The Oso slide was much larger. It covered about a square mile. In all, 43 people lost their lives in that event in March 2014.

Richardson does not consider himself an expert in landslide recovery. He says the Seattle Fire Department just applied the skills they had to a difficult situation. And Sitka is doing the same thing.

“Most people don’t have a lot of experience. We didn’t have any experience responding to landslides. We’ve had our usual small slides in the city that we’ve responded to in the past, that did damage to structures but didn’t entrap any people. Oso was by far the biggest one that any of us had ever encountered.”

Richardson will be in Sitka for two days while the clearing work continues. He’ll be observing the use of a special pump being flown in by the Coast Guard that is used for the removal of mud.