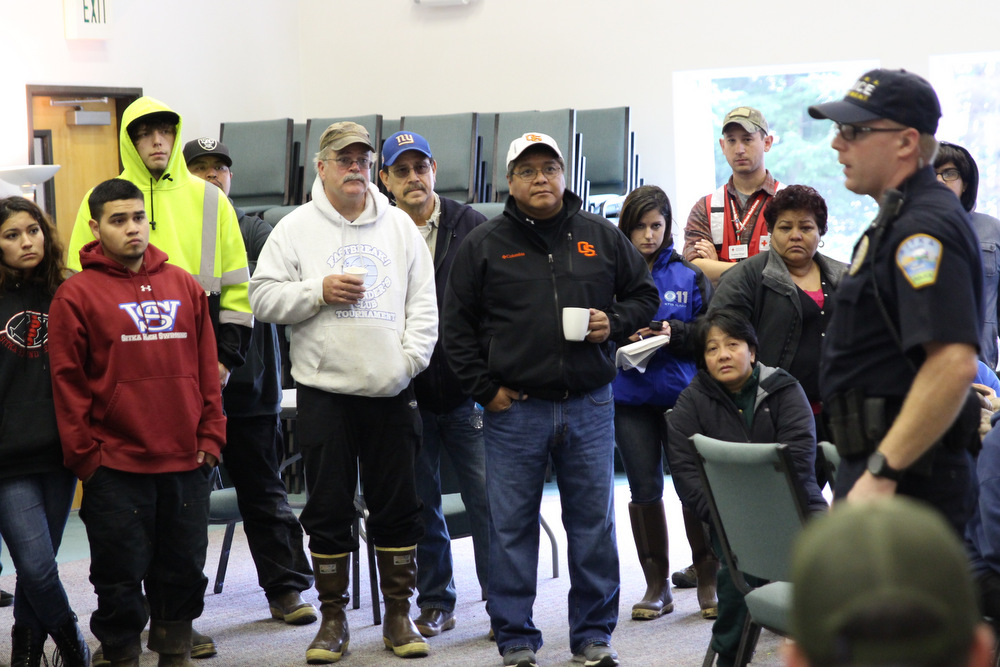 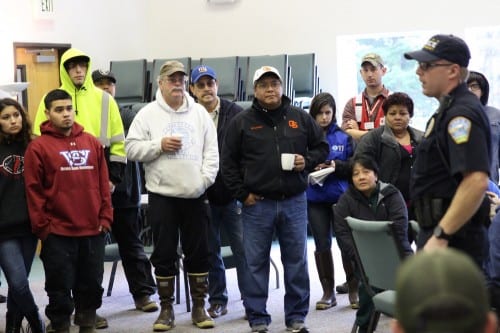 Sitka Police Lt. Lance Ewers speaks to volunteers and friends and family of the missing men at Grace Harbor Church on August 19, the day after Sitka was hit by a series of landslides. (Rachel Waldholz, KCAW)

At the first meeting of the Sitka Assembly since last week’s (8-18-15) landslides, city officials spoke emotionally about the loss of three local men — and said they had been overwhelmed by the response of city staff, volunteers, and ordinary citizens.

The meeting began with a moment of silence to honor the three men who died in the August 18 landslide. It was announced by assembly member Aaron Swanson.

Swanson: I ask that we take a moment of silence to honor the men we lost in last week’s landslide: Elmer Diaz, Ulises Diaz, and William Stortz. [[Silence]]

The assembly, city staff and members of the public stood and observed a full minute of silence. It was followed soon after by emotional testimony from Fire Chief Dave Miller.

“For the last week or more, the people of Sitka have been flat amazing,” Miller said. “They have gone far and above what I would ever have thought any community could ever have done.”

Miller spoke about the hundreds of people who volunteered to help with the search, or dropped off food; and he spoke of the thousands of dollars raised so far for the families of the three men and for those who were evacuated from their homes around the landslide.

“A disaster like this hopefully happens in a community once in a bajillion years, and hopefully I never see another one like this ever,” Miller said. “But I’ve, in my mind I’ve tried to write a letter to the editor, and what it would say. And I’ve been doing this since last Tuesday. I could never get past just, ‘Thanks.’ The list would be too far, and too long. The paper would double in size in one night with all the names and organizations, and everybody that donated time and effort and equipment and everything to make this work.”

While he couldn’t possibly thank everyone, Miller said, he gave special praise to Deputy Fire Chief Al Stevens, who has been running the day to day response and recovery effort. And he ticked off a host of local, state and federal agencies that have responded, including the Coast Guard, State Troopers, Forest Service and National Park Service. Of the Sitka Fire Department itself, Miller said, “I work with the greatest people in the world.”

But above all, he thanked regular Sitkans. “We may not see eye to eye on everything,” he said. “But when it comes right down to it, this community rocks.”

“In working with the Tlingit people I learned that when you address people whom you hold in high regard, you stand,” Gorman said. “And tonight I hold this community in the highest regard.”

“We recovered William tonight,” Gorman said. William Stortz’s remains were recovered just before the meeting, at about 4:15 p.m. Tuesday. “We recovered the Diaz boys last week. Many remarkable moments over the past several days. One of the more powerful ones was last week when Mr. Diaz, in all his courage and all his dignity, crossed the still-settling slide area to comfort the Stortz family across the way, after he had lost his first son. His second son had yet to be discovered.”

The next day, Gorman said, he watched as the Stortz family did the same thing, walking over to comfort the Diaz family.

“The strength, the courage, the humility of this community has been remarkable,” he said. “This is a community that stands tall and comes together.”