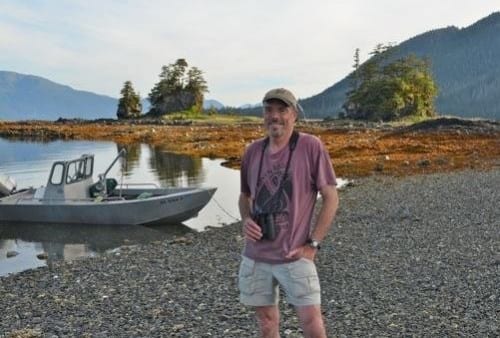 William Stortz, on one of his favorite beaches near Sitka.

William Stortz was the most complicated man many of us will ever know. He was deep and steadfast and difficult to fathom, like a rock formation that may seem strange or familiar depending on which side of it you’re standing.

But complicated doesn’t mean contradictory. The chamber-music junkie was never at odds with the motorhead; the city official did not chafe at the salmon fisherman who stacked kings on the deck of his skiff like cordwood. Walking down the street to grab a double-Americano from the Back Door, William measured his universe in long, deliberate strides.

William Stortz was born in Concordia, Kansas, on March 15, 1953, and died on August 18 of this year in Sitka, Alaska. The community’s building official, he was inspecting drainage in a new subdivision during an early autumn downpour — the best possible time to do that work. The landslide that caught William, along with Elmer and Ulises Diaz, took more than their lives; it also swept away some of our faith in the landscape and its power to sustain us. We will now lay these men to rest, but rebuilding our relationship to this place will need more time.

William’s life and character were shaped by less-than-ideal circumstances: His mother, Dorothea, a nurse, died of cancer just two months before his high school graduation. William put his college plans on hold to help out his dad, Marvin, who was Concordia’s sheriff and magistrate. After two years, William no longer saw the point of more academics. Instead, he joined his brother Steve in Ft. Lauderdale and learned yacht restoration.

It’s not hard to imagine William making this decision. He read extensively and had a huge intellect; any classroom might feel small with him in it. He also was a remarkable conceptual thinker when it came to construction. Erin Kitka, his colleague for 23 years in Facilities Management at SEARHC, says William wouldn’t rip out an old porch on a building unless he had the new material already ordered “and practically measured and cut.” If you were to ask William about his work he might just say, “I’m in the trades.” But his hands and brain were harnessed in an out-of-the-ordinary way that allowed him to rebuild an outboard from the pistons up while a Schubert quintet pulsed through his ears.

After Florida, Steve and William returned to Kansas and rented a farm together. William cared for his sister Patty’s kids while she took advanced health care training. They were ages 6 and 9, and William was about 22. He was married briefly during this time, to Jean Ann Neeley.

In 1980 the brothers again jumped time zones and moved to Silverthorn, Colorado, to ski and build houses. Three years later, William and his dog, Josh, made the long drive to Fairbanks to visit friends. Fairbanks had good snow for skiing, some opportunities in custom furniture building that attracted William, and a young woman named Libby Finesmith who attracted him even more. They met at a party for (now Fairbanks mayor) Luke Hopkins in January, 1984, and were married seven months later. Daughter Sasha joined the family the following year.

Libby introduced William to Brendan Kelly in Fairbanks. Kelly is the chief scientist at the Monterey Bay Aquarium, and a former science adviser to the White House, but at the time he was doing research on seals for the University of Alaska. William was working in the UAF maintenance shop. Kelly had spent several springs unsuccessfully trying to capture and tag spotted seals in arctic ice. His entire team was discouraged, and he turned to William for help.

Kelly invited William to his research camps four times to consider ways to trap the seals harmlessly. The solution finally came, but it wasn’t on the ice. It was in a bathtub. “He called when I was in Juneau — he had just jumped out of the shower,” Kelly says. “I have this image of the guy standing naked at his phone table!” William’s eureka moment was an idea for a new net — one that proved instrumental in moving Kelly’s research forward.

Contract work in Fairbanks eventually connected William to the tribal health system, and in 1988 he landed a job in Sitka as the project manager in Facilities Management at SEARHC. He stayed 23 years.William approached life in Sitka with humility. He apprenticed himself to Erin Kitka and his family and became a serious hunter and fisherman. For over two decades, every time he left the dock William notified Kitka of his float plan. On the day he went missing, Libby called Erin just to be sure that William had not intended to be away.

“We were like an old married couple,” Kitka says of William. “Always fighting, always close.” Kitka is a few years younger, and loved to test William’s limits. On their last alpine deer hunt William’s heart started an irregular rhythm. “He went into a-fib and laid down in the muskeg, kicking his knees up to his chest, trying to convert his heartbeat!” Eventually William recovered and continued the climb. Kitka insisted on going back to town. William relented, “but only after a few choice words.”

In 1998, Alascom put the Cable House up for sale and Raven Radio was the logical buyer, but Sitka’s assembly split over whether to grant the station a loan from the city’s economic development fund. William, among others, conveyed the problem to Sen. Ted Stevens — one of public radio’s greatest allies — and after a few calls from the senator’s office, the Sitka assembly magically unified overnight. The loan is long-since paid off, and the beautifully-restored Cable House anchors the south end of Lincoln Street.

William became Sitka’s building official in 2011. He was nine months short of retirement when he went to inspect the culverts on Kramer Avenue on August 18. It was his sharp attention to detail that put him in the path of a disaster. Like many, I have taken well-drawn, but ill-considered, building plans to William in his office at city hall and watched him sigh deeply and turn to his copy of the Uniform Building Code, like a rabbi to the Torah. Beams may bend, but William would not. He tolerated some scatterbrained ideas, but not at the peril of the future occupant of a building. His signature on a permit was a blessing, a gesture of faith in your ability to get it right.

Sitka breathed a collective sigh of relief when William’s body was found on the afternoon of August 25, one week after the slide took him. We don’t care for mysteries when it comes to the people we care about most. In William’s view, death is the final act in our existence, the period at the end of a long and vibrant sentence. So we’ll continue on the journey William shared for 62 years, but it will be damned hard to pull away from the dock without him. We’re feeling shaken and uncertain, and it may take some time lying on the damp earth to restore our hearts to their normal rhythm.