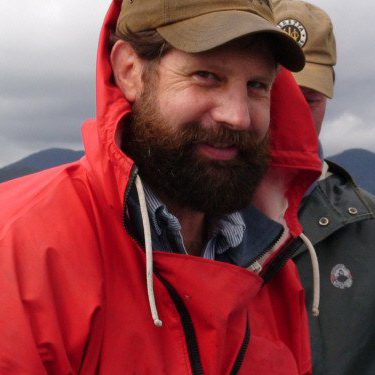 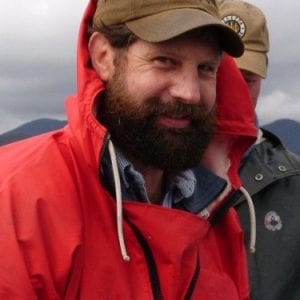 The newest employee of the Alaska Association of School Boards knows a thing or two about rearing young creatures. Lon Garrison has spent 30 years in aquaculture, running or working at salmon hatcheries around Alaska.

The former president of the Sitka School Board says the shift in careers into education has come naturally, and reflects his passion for helping schools do better.

KCAW’s Chantal Cough-Schulze spent the past year as an Americorps VISTA Volunteer at Garrison’s last post at the Sitka Sound Science Center. She sent this profile:

Lon Garrison knows fish. He has managed nearly every hatchery in northern Southeast Alaska, since driving across the country from Burlington, Vermont to Haines in 1987 with his wife.

We got to Haines on Christmas Day and it was snowing like crazy. Got off the ferry, parked the truck, went into the little house we were staying in, and it proceeded to snow like 5 feet, so it was perfect. So that’s where I started my career as a salmon enhancement biologist in Alaska.

For the past four years, Garrison has been running the Sitka Sound Science Center’s Sheldon Jackson Hatchery. At the beginning, it was a little rough.

Things were pretty shabby.  We were just holding things together with a hope and a prayer and some baling wire and a lot of blue tarps and buckets.  You know, ’cause the roof leaked like crazy and I think the first year I was here as the hatchery manager, most of the latter part of the summer, and through the fall and at least til Thanksgiving, probably half of my nights I slept on a cot in the hatchery, just because the water system was so unreliable, and you never knew when you were gonna have to start up an emergency pump to keep the water flowing to the fish.

Soon enough, with the help of grants and a lot of passion, everything fell into place. The hatchery is now a great training facility for people from all over the country.

So Garrison is comfortable changing directions now. He is moving to Juneau with his wife and beloved hatchery dog Barnacle to serve as the director of school improvement for the Association of Alaska School Boards. The transition may actually have begun in 2007, when he was first elected to the Sitka School Board.

I guess I kind of got a wild hair and decided to do something completely different. I thought, well, this would be a great way to kind of give back to the community and is something that I’m interested in, which was education.

In his new job, Garrison will be traveling around the state helping school boards work even better. He is excited to understand different school boards challenges and successes, and help them be as effective as possible. He says that it’s easy to become bogged down in the details of running schools — he wants to help boards avoid micro-managing their macro-sized districts.

Alaska has done some pretty amazing things with regards to education, and has had to be innovative because of the vast distances and the great areas that we cover in terms of how big our school districts are. I mean, the Northwest Arctic school district is bigger than Montana, Idaho, and Wyoming put together, so, it’s huge.

But Garrison doesn’t discount attention to detail entirely — remember all those sleepless nights keeping the hatchery running? Holding a school board together is not really that much different.

This might sound kind of wacky, but I want to become a certified Parliamentarian. So, it’s one of those things where I see Parliamentary Procedure often misused, and it really can be extremely helpful in running a meeting, and understanding how it works, it’s not a system that’s designed to suppress a good meeting; it’s really designed to help a meeting run very efficiently and get people opportunities. … It sounds kind of nerdy, but I’m going to put on my nerd glasses and check it out.

Still, it’s a major leap from aquaculturist to education advocate. Garrison expects to keep his hands wet, so to speak, in fisheries, but he’s thinks this change has come along at the right time. .

I just guess I’d say, I’ve been so fortunate to have a really great career in fisheries. I knew I wanted to be a fish biologist since I was first entering college.  So it’s been a real blessing and a privilege to live that life. And now I just see me transitioning to the next chapter, doing something a bit different, and I’m ready for that change.

For those of us left behind at the Sitka Sound Science Center, we’ll have to transition to a life without Barnacle, Garrison’s hatchery-loving golden retriever.

I don’t think he’s very happy with us.  You know, we may to bring him back, now and again.  He’ll miss it.