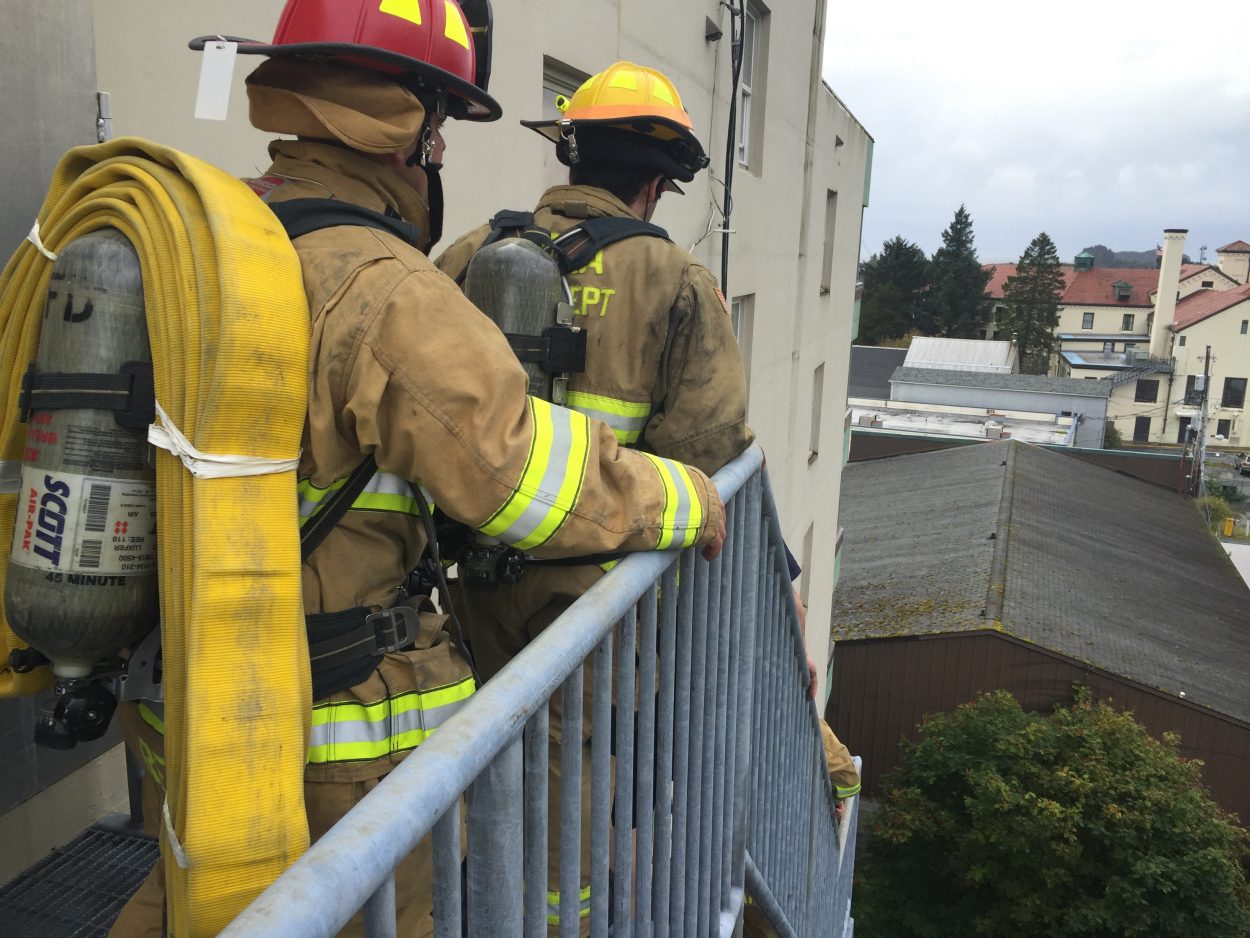 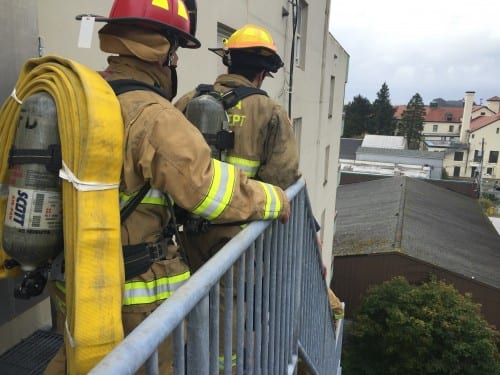 Firefighters and first responders in Sitka honored the lives of the fallen in a 9/11 Memorial Stair Climb on Saturday (09-12-15). Some donned 90+ lbs. of gear. (Emily Kwong/KCAW photo)

The 9-11 Memorial Stair Climb commemorates the lives of the 343 firefighters lost in the twin towers on September 11th. Created by a group of Denver firefighters in 2005, participants take a symbolic walk once a year in the shoes of the fallen, climbing 110 stories (the height of the World Trade Center, measured as 2,200 steps). Although Sitka’s tallest building is only seven stories high, the local fire department has found a way to bring this emerging tradition home.

On Saturday, September 12th, a group of firefighters move through the echoey stairwell of an apartment building without the slightest hint of urgency. There was no fire to fight at the top. Just stories to climb.

This is Mike DeBell Jr’s first time participating in the 9-11 Memorial Stair Climb. He’ll walk up the apartment stairs and down the fire escape. Twenty times. While on the stairwell, he stops midway to take a short break.”Well I’ve done…what is it? Seven flights four times? Five times now? I’m getting pretty tired. But I’ve got 15 left,” said DeBell. 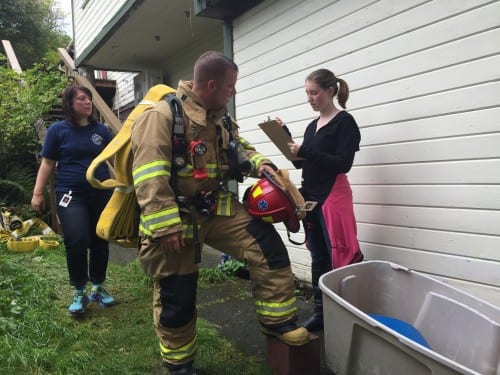 Coast Guard Chief Petty Officer Matthew Reines takes a break, while determining how many more laps he has to make before completing the 9/11 Stair Climb. (Emily Kwong/KCAW photo)

DeBell is only 10 minutes into the climb and blinking sweat out of his eyes. He’s wearing full turnout gear and an air pack, which adds about 60 pounds to his load. But he’s not complaining. “I do see some people are wearing hoses as well,” DeBell said before approaching another flight of stairs.

A few of the climbers trudge upward with a 50 foot yellow hose across their back, topping their gear load at 100 lbs. But it’s not a race or a contest. Fire Captain Dani Snyder has been organizing the Sitka Stair Climb for the past three years. She says it’s more important that participants simply give it a try.

Snyder first did the 9-11 stair climb in the Juneau Federal Building. The climb takes about an hour and for her it became intensely personal. “It was the first time I had ever done it and I was trying to picture what it would be really like in the Twin Towers – going up and not really knowing what you’re getting into,” said Snyder.

Snyder climbs with more stoicism now, focusing on the physical challenge. But that doesn’t mean she walks without purpose. Each participant is given a badge, bearing the name of one New York Firefighter to honor during the climb. Snyder opens up her jacket and holds out hers. It’s white card with a picture of Lieutenant Kevin J. Pfeifer, Engine 33. 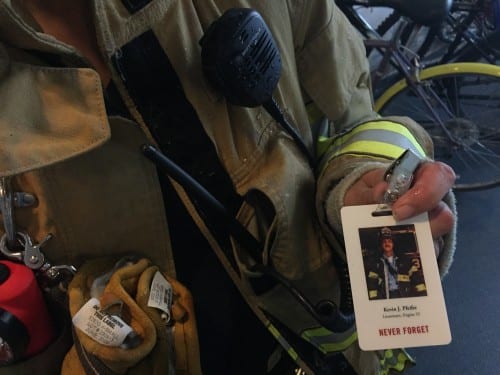 Sitka Fire Captain Dani Snyder is climbing in memory of an FDNY Lieutenant, who lost his life on 9/11. (Emily Kwong/KCAW photo)

“[Pfeifer’s] brother was one of the chiefs that was in the lobby of Tower 1 and the story that the brother heard afterwards was that he was directing people  – firefighters – how to get out, once they started evacuating. And he didn’t make it out.

Stamped beneath his photo are the words, “Never forget.” Participants pay $35 to register and all the money raised goes towards the National Fallen Firefighters Foundation. Snyder explains that within the fire service community, the significance of September 11th goes beyond the events of that day.

“9/11 is such a big loss to the fire service and such a one time epic event. It symbolizes a lot,” said Snyder. “It’s in memory of those guys, but it’s in memory of everything that everybody does and the fact that a lot of the times you go to work and bad things happen and not everyone can make it home. We’re just trying to show we respect those people who have given it all. ”

(Huffing and puffing sounds, as participants climb the stairs) 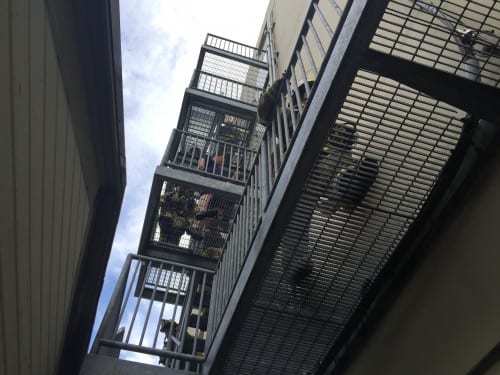 The climb takes about an hour. All proceeds go towards the National Fallen Firefighters Foundation. (Emily Kwong/KCAW photo)

Towards the end of the climb, most of the participants have stripped down to their suspenders. Their gear has been discarded in a sweaty pile below the fire escape. Matthew Reines is with the U.S. Coast Guard. “I thought it would be tough, but just like steadily tough. That last three laps your legs are just jello,” Reines admits.

Even so, he did it. Reines was on a naval base in San Diego on September 11th and spent the day guarding the Golden Gate Bridge. He recalls how that day touched service branches across the country and the stair climb has come to reflect that. Memorial climbs are scheduled through the fall in places like Chattanooga, Tennessee and Yellow Springs, Ohio, among other cities.

(Crowd cheering on the climbers)

In Sitka, Alaska, it’s raining. A small crowd has sought shelter inside the apartment doorway, which is caked with mud. Among them is Jackie DeBell, Mike’s mom. “Go Michael!” she shouts.

Firefighting runs in their blood. Jackie’s father was the fire chief in Kake. She was a firefighter too. And now she’s cheering on her son as he nears the end of his climb.

And as heroes do, they show their support to the final participants by joining in her last lap. 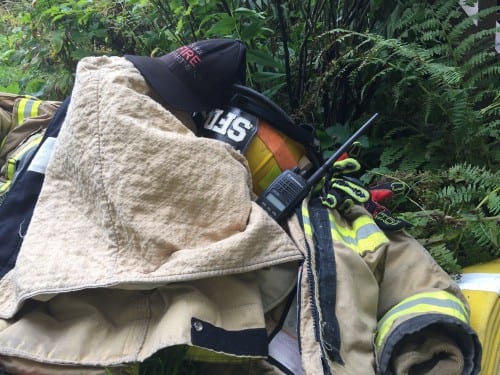 Towards the end of the climb, most of the participants have stripped down to their suspenders. Their gear has been discarded in a sweaty pile below the fire escape. (Emily Kwong/KCAW photo)