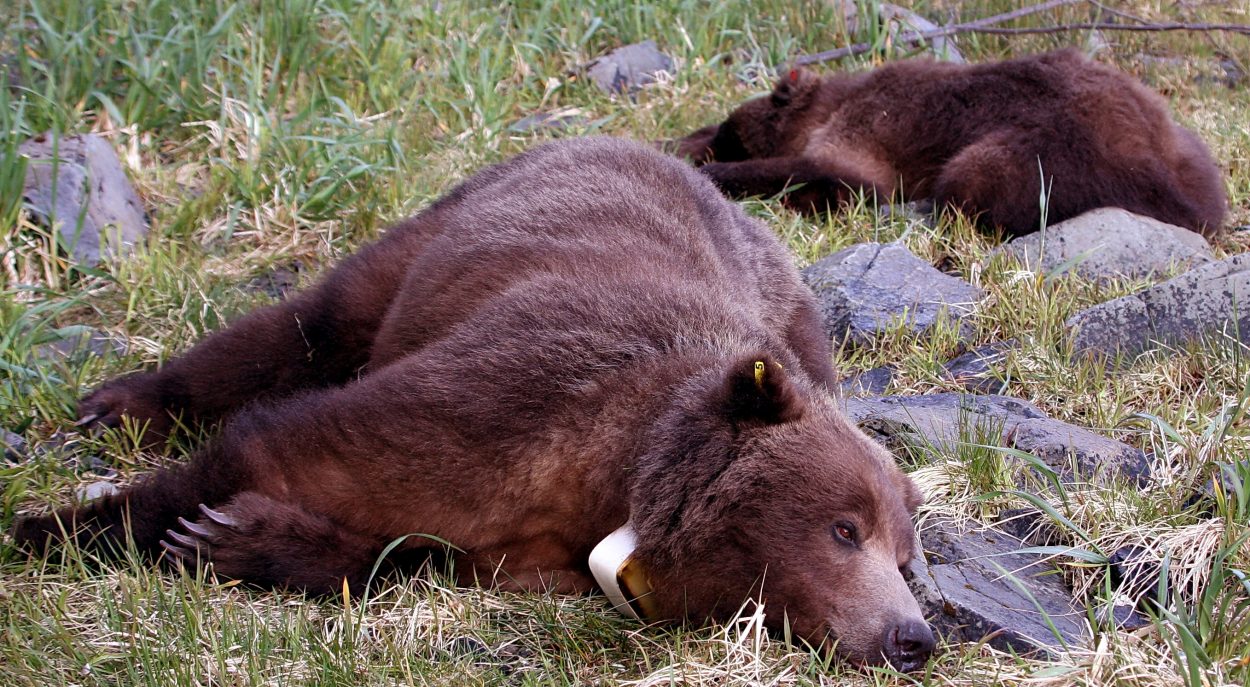 In this letter, ADF&G management biologist Phil Mooney explains some of the challenges in addressing Sitka’s urban bear issues.

We have had a bear culvert trap set for this animal since September 11. Brown bears are difficult to trap this way, but it’s not safe to use a cable snare in a residential neighborhood.  Even the use of the culvert trap has public safety issues and curious folks and neighborhood pets can be seriously injured or worse, if they mess with it.  Therefore our protocol for setting one in a neighborhood has to meet a variety of safety parameters for us to do so. Once in a culvert trap the brown bear reacts completely opposite of a black bear and fights the trap and anything that approaches it.  We have had them break the heavy mesh wire screen, the welds on the metal door, and even manage to tip the trap over. Darting the bear inside the trap is a tricky matter in itself. 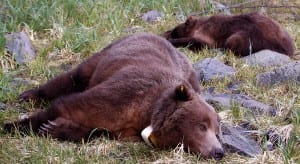 Mooney darted and collared this sow and her cub near the Cove Marina in 2010. (ADF&G photo)

Unfortunately, Sitka does not have good standards for keeping chickens in residential neighborhoods. Add in the factors of brown bears and attractive garbage in these neighborhoods and our current situation is a natural result. It’s easy to blame the problems on the bear, but the root cause lies with people. The bear “discovered” (as some do) that chickens are good to eat and relatively easy to get in many cases.  This makes it difficult for people, after-the-fact, to keep the bear out.  Very few people use electric fencers here.  In many places  a fencer is a requirement by ordinance if you keep “domesticated livestock/chickens” in residential areas. Still at least two Sitkan have installed them and demonstrated their effectiveness — even on this conditioned animal. ADF&G has used portable, D cell powered electric fencers, to successfully protect sleeping quarters of staff in remote locations where the bears rarely have contact with humans and behave quite differently than our more habituated bears in Unit 4.

Properly set-up, electric fencers are effective against  bears and especially so on sub-adult bears, which this particular bear is.  They are curious and still learning the ways of people and bears. They are very  intelligent and have long memories. They have great noses to sift through the smells from a distance and combined with good night vision and hearing to make use of the dusk/night/early dawn hours to forage while we’re pretty much limited to the distance our spotlights and floodlights to see what’s happening.  This bear is easily spooked and not confrontational.  Folks have met this bear on the Cross Trail and it heads off.

People occasionally urge ADF&G to destroy a bear to protect the safety of children and others. Although it’s within the realm of possibility that a child or person could be mauled by a bear, the reality is they are more at risk from being mauled by a neighborhood dog, hit by a car, or seriously hurt on the school playground.  The instances where people have been smacked by a bear here in town have usually resulted from encounters with a female defending her cubs. This bear in question is motivated by accessible food in the neighborhood.  As long as food is accessible and we’re unable to deter him physically (with rubber bullets, bear pepper,  taser, etc. ) he will hang around.

Defensive hazing (the electric fencer) delivers a shock that he doesn’t like and he remembers it.  This is the safety message that I wish I could better deliver and reinforce to the residents here, and it does come back to the safety of folks, young and old, domestic pets, and property:  In my opinion, having a bear around that is “known” in its behavior is a better situation than removing it and getting a “newbie” in the area.  That’s why  ADF&G spends the time in our schools and in the community pushing the Bear Awareness and Bear Safety programs to educate kids and adults about habitat and bear behavior.

This brings me to a final point;  trying to kill a bear in a residential neighborhood is always going to be my dead-last option. The police and the troopers train and train to deal with firearm issues in residential areas.  They will tell you how serious a decision it is to fire a weapon in a neighborhood.  Now consider the instance of an angry homeowner  who, in the wee hours, realizes that his chickens are being raided by a bear.  He takes a high powered rifle, or a 12 gauge shotgun with slugs, and opens up in haste on a moving target, in poor light, in a neighborhood. In most cases the chances of him killing the bear cleanly is slim and the chances of him wounding are good and the chances of him missing it completely are even better. But where has the bullet or bullets traveled, ricocheted, etc.?. Is that risk worth chickens?

Under Alaska state law you have the right to defend your life and property (DLP).  What that means to me personally, in the situation of a bear, is that the bear is trying to break into my house and I’m in it, my wife and my kids are in it and I am concerned for our lives.  The thoughts that 1) I will violate a city ordinance on the discharge of a weapon, 2) that I will have to fill out a 6-page DLP form and be interviewed by the troopers, and 3) I will have to skin the bear and salvage the hide and skull and turn those over to the state –will ALL be the very last things on my mind in that scenario.  In a perfect world, I would shoot the bear point blank, killing it without endangering any neighbors from a stray or ricocheting bullet ploughing through the walls of their house. For me that would be the only “right” scenario and I will deal with points 1-3 after the fact.

In the meantime, I try to do all of the other things to make sure the bear passes me by. We have raised 4 kids (and continue to raise 2 more kids) in Sitka and they understand about garbage and bears. We compost responsibly. We keep our putrescible waste out of the garbage can until the morning of pick-up. If we need to, we take items to the Jarvis St. transfer station. We recycle. We have outdoor motion-sensitive lights. We have chickens and a decent coop to lock them up at night with a perimeter electric fencer. We have a dog and a cat. We work, live and play here and enjoy everything Sitka and southeast Alaska has to offer, including bears. Bears aren’t my friends and they aren’t more important than people but  I respect them for what they are and understand my responsibility for the space and resources we share.

Opinions expressed in commentaries on KCAW are those of the author, and are not necessarily shared by the station’s board, staff, or volunteers.