With six months on the clock, citizens’ task force gets to work 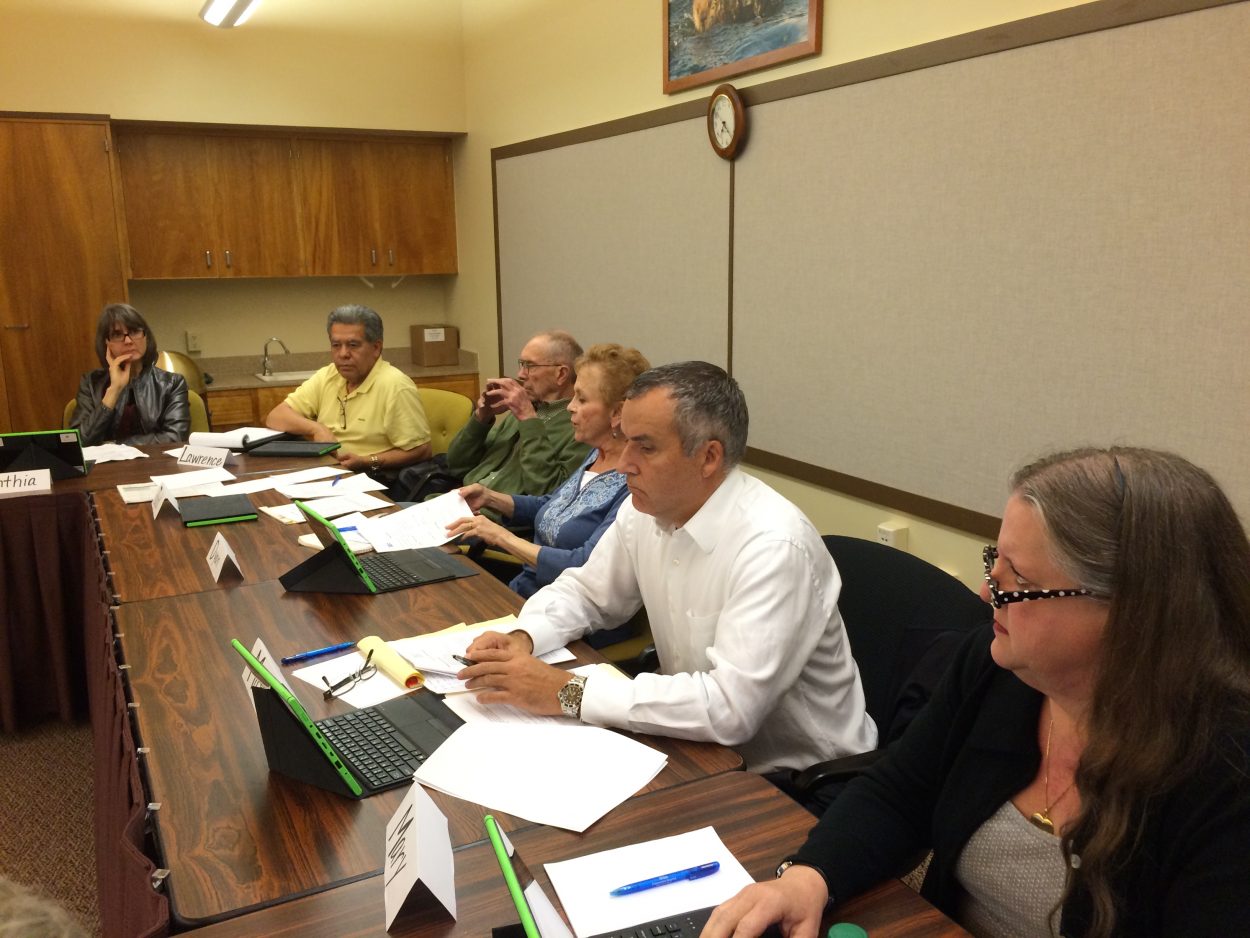 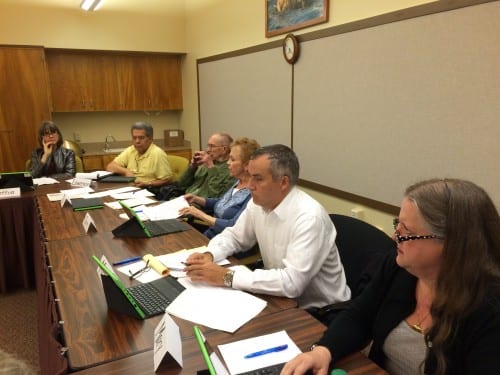 Soon after passing the 2016 budget, the Assembly directed the city to create a citizens’ task force. The seven-member group will have six months to take a deep dive into city finances and if successful, emerge with a path forward for Sitka. At least, that’s the plan.

The meeting began with a round of introductions.

Those are the voices of Jack Ozment, Cynthia Gibson, and Lawrence Spotted Bird. Also around the table are Rob Allen, Mary Magnuson, Dyan Bessette, and Max Rule. The financial credentials of the group are impressive. There’s CFO, a CEO, former assembly members, and several former and current managers and financial advisors. All are comfortable with spreadsheets. But nothing could have quite prepared them for this. This is Max Rule, CFO at Hames Corporation.

Materials that, according to City Administrator Mark Gorman, take the newbie Assembly member two months to get through. These citizens have a matter of weeks. Rule takes the reading list in stride. Much of it has been posted to the city website for all citizens to read. He’s says the one thing that unites the task force is a deep concern for Sitka.

“It’s a great community, we all love it,” said Rule. “We all want to live here and we just have to find solutions to be able to do that and stay here and keep our children here as well.” 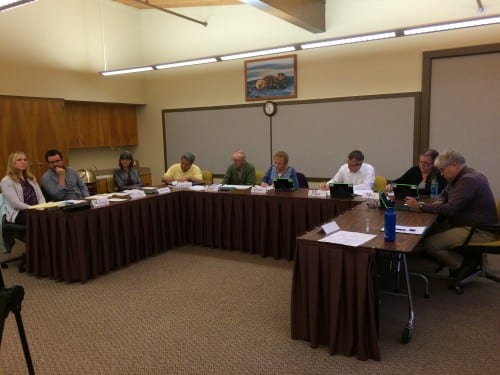 The citizens’ task force agreed to meet weekly, at least in the beginning. Rob Allen was appointed Chair and Max Rule as Vice-Chair. Tristan Guevin is a liaison for the Assembly. (Emily Kwong/KCAW photo)

With all this at stake, the question at the core of this first meeting was critical: what exactly can this group hope to achieve in only six months? Or, to put it another way…

Doug Osborne: So imagine that this task force is extraordinarily successful. What exactly would that look like?

For that, the city brought in Doug Osborne. The director of health promotion at Sitka Community Hospital knows a thing or two about these kinds of meetings, where a group is shaking hands for the first time and getting serious about the task ahead. Mary Magnuson is a business owner who has been living in Sitka for the past 15 years.

“My hope is to identify the core responsibilities of the municipality and my concern is all of the fluff that abounds from the days of big money will drive us under…because no money is free,” said Magnuson.

The phrase “core services” was echoed by many throughout the two-hour meeting: what is essential, who will pay for it and how. Rob Allen, CEO of Sitka Community Hospital, wants the task force to go on a fact finding mission and scrutinize what’s possible, feeding the assembly that information. 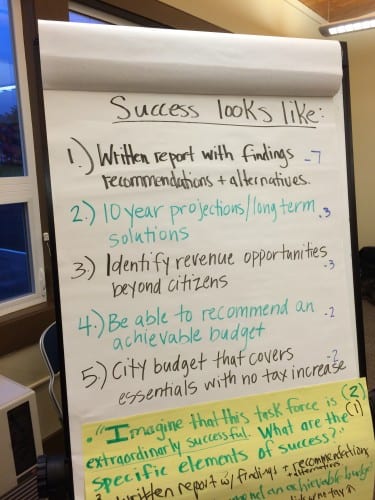 The group generated a list of goals and voted. Number one was to produce a written report with findings, recommendations, and alternatives for Sitka’s financial future. (Emily Kwong/KCAW photo)

“My hope is that the assembly will use us for some political cover,” said Allen. “That we could perhaps come up with some ideas that couldn’t come from the assembly, but could come from us.”

The next two hours were a combination of this (CHATTER) and this (SILENCE). Talking and reflecting.

By the end, the group isolated five goals. Number one was to submit a written report to the assembly with their findings and recommendations for city services this fiscal year. They want their final product to be realistic, politically achievable, and vetted through public comment from a wide variety of Sitkans. And oh, they want actually see the task through. Or as Allen put it….

Rob Allen: That all of the current members are still here.
Dyan Bessette: And speaking to each other.
Doug Osborne: Should I put still here and still talking?
(Laughs)
Rob Allen: I guess if we’re going for the unachievable.

All jokes of being driven off the island aside, it’s wasn’t all that long ago a financial planning group flopped in Sitka. In 2011, the Assembly voted to disband the Long Range Planning and Economic Development Commission. And the remaining commissioners – three Sitka citizens – didn’t protest. They felt the commission lacked a clearly defined goal or purpose. The group disbanded with a 5-1 vote by the Assembly.

City Administrator Mark Gorman has faith that the task force model not only will work, but has to work. “It’s not a commission. It’s a task force with a short assignment, a sunset date, that they need to complete their work as the assembly takes on the 2017 budget.

Gorman says that while the assembly is the ultimate judge of what is proposed, they will take the findings of the citizens’ task force seriously.

“The assignment this task force is taking on is loaded with risk and emotion. It’s potentially hitting people in their purses, the recommendations that they come forward with. And that will be loaded with public agendas and comment.”

And how will the task force keep their own personal agendas out of the proceedings? And represent other perspectives? For example,  there is no representation from the fishing industry on the task force. Allen, who was appointed Chair of the Citizens’ Task Force with Max Rule as Vice Chair, says that through outreach, he hopes to close any gaps.

“That’s where we’ll have to encourage citizens to come and participate. This is the committee appointed by the Assembly and this is what we’re working with,” said Allen. “Let’s here from as many voices out there and try to get that balance.”

And for that, the Citizens Task force wants to leave their door wide open. All meetings are open to the public, with citizens to be heard at the beginning and at the end.

The next meeting of the Citizens Task force is Monday, September 28th at the Sealing Cove Business Center.