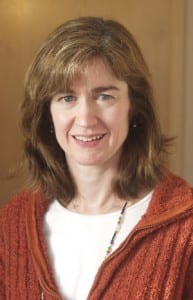 The Sitka School Board has a new member. Jennifer McNichol was appointed last night (Monday 9-21-15) to serve a one-year term.

McNichol is a pediatrician at SEARHC. She was one of seven applicants for the vacancy created by the departure of former board president Lon Garrison.

McNichol won the appointment on two ballots, with the support of current members Jennifer Robinson, Tim Fulton, and Tom Conley.

The other applicants to receive votes during balloting were Brian Richardson, former assembly member Thor Christianson, and Loyd Platson.

The board interviewed each candidate separately for about ten minutes before making its decision. During her interview, McNichol said that she was passionate about public education, and felt compelled to serve.

“My mom was an educator. My dad was the product of a great education. So, I just highly value education. I feel very strongly that public education deserves as much support as we can possibly provide.”

McNichol has two children in the district, Colin, an eleventh-grader, and Dominic, an eighth-grader. She’s served on the boards of both the Mt. Edgecumbe Preschool and the Baranof Barracudas Swim Club.

McNichol works part-time as a pediatrician at SEARHC, and twice a month at Sitka Medical Center. Along with Tom Conley, she’s now the second pediatrician on the school board.

McNichol sees a strong connection between her medical practice and the schools.

“You know, I see so many of my patients benefitting from their education, but I also see the needs that they have, which are tremendous in some cases. Sometimes, they’re very well met, and other times there are definitely challenges. It’s a pretty complicated, sometimes overwhelming, feeling to be involved with public education, but I think it’s the most important thing can do is educate our kids well, for our communities and ourselves.”

McNichol submitted her application for the school board vacancy just a few hours before the deadline. But she says that she’s been considering serving for much longer. Right now, she’s not sure if she’ll run for the seat next October or not. “Let’s see how this year goes,” she says.

Although McNichol will take the seat vacated by former president Lon Garrison, she won’t automatically become president herself. Every year the board elects a president from among its own membership.