Though voter turnout was slow in the morning (10-06-15), it picked up in the afternoon. Election officials check in registered voters at Precinct 1 (Emily Kwong/KCAW photo)

As far as voter turnout goes, Election Day this year was slow, but steady. The morning saw little action. And as of 2 o’clock Tuesday afternoon, only 285 Sitkans had voted. At that time last year during the general election, it was over 880. Dorothy Orbison, Chair of Precinct 2 at St. Gregory’s Church, attributed this to the fact that it’s a municipal election this year and there is no proposition on the ballot.

“There don’t seem to be any hot button issues on the ballot this year to pull a lot of people out, although I understand that early voting for absentees was fairly robust,” said Orbison. “So maybe the total will be decent by the time we’re done.” 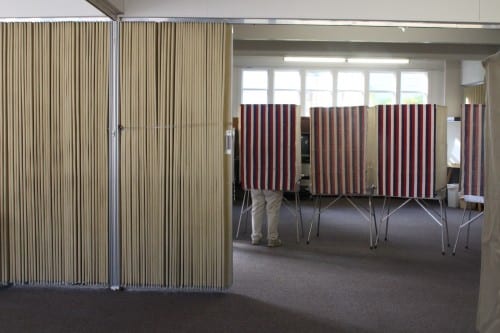 A voter casts her ballot at precinct 1. (Emily Kwong/KCAW photo)

According to city clerk Sara Peterson, 277 absentee ballots were issued, a slight uptick from last year’s 246. Over at Precinct 1 at Grace Harbor Church, election official Keith Nyitray said that voters were trickling in as well.

“According to the tally, we’re getting 40 people an hour,” Nitray said, which is about what he expected.  He helped voters feed their ballot into the machine, which is tricky combination of grabbing the envelope and inserting the ballot, of holding on and letting go.

Nyitray watched fastidiously, to make sure every vote is counted. It’s common he said, for voters to mismark their choice. “[Voters] don’t put it in the oval. They put it on the side and the machine will reject it. And so this way, we make sure they have a chance – if they want to re-vote – so their vote will count.”

Nyitray had already caught this error a few times today. The corrected vote can make a huge difference when it comes time to count. “In our community, we’ve had mayors elected by 1, 2, 3 votes, so every vote counts,” he said.

Nyitray paused to give a sticker to a voter, stamped with the American flag in motion and the words, “I voted today.” 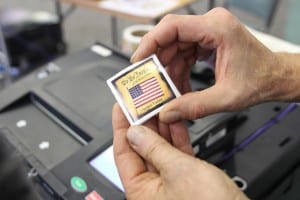 “This is also fun,” Nitray said. “You get to see the town. Or at least half the town.”

That’s because, Precinct 1 and Precinct 2 voted in different locations this year. Anne Pollnow, Chair of Precinct 1, explained, “Precinct 1 is the outskirts of town. Precinct 2 is the downtown area.

Pollnow remembered the days when Sitkans voted in separate places and said that this is a return to those times. “People were used to it. They were used to certain cookies at certain precincts and certain people,” Pollnow said.

Along with 277 absentee ballots, the question ballots will be counted on Friday. Turnout was higher than the municipal election in 2013, which saw 1,332 ballots cast. This news was heartening for officials.

Pollnow has helped run the municipal election for several years “just to help out” and said, “I think it’s important for people to vote and be a part of the democratic process. I think you don’t get a right to complain if you don’t vote.”

Nor do you get a free piece of candy. And like a good citizen, I snagged a Reese’s Peanut Butter cup on my way out the door.

CORRECTION: An earlier version of this report incorrectly stated that voter turnout was lower than the municipal election in 2013. KCAW regrets this error.

Over 300 absentee and question ballots will be counted by municipal election officials on Friday at 3 p.m. at the Sealing Cove Business Center. 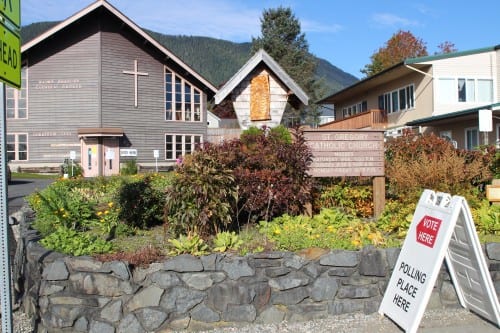 St. Gregory’s Catholic Church was host to voters in Precinct 2, which included residents in the downtown area. (Emily Kwong/KCAW photo)