Tuesday night (10-27-15), the Assembly approved a contract for solid waste management that would raise garbage rates by 21.3%. Here’s a table detailing those proposed to Sitka’s solid waste rate structure. (Photo courtesy of City and Borough of Sitka)

Tuesday night (10-27-15), the Sitka Assembly approved a contract with Alaska Pacific Environmental Services to continue collecting Sitka’s garbage. The agreement does come with one important caveat: In their bid, Alaska Pacific said customer rates must increase by 21.3%.

Solid waste is a fancy word for all the garbage you put out on the curb, drop off at the Sawmill Creek recycling center, or take to the Transfer Station on Jarvis Street. And for 2700 paying Sitkans, solid waste gets carted away once a week by a company called the Alaska Pacific Environmental Services.

To keep their service going, the company wants to increase customer rates by 21%. But what does that mean for customers? Public Works Director Michael Harmon shared the bill, crunched by Chief Finance Officer Jay Sweeney.

Jay’s not here tonight and I know he’d really want me to make sure we put that percentage in perspective. So let me put out a couple here. So a 96-gallon cart, that’s the bulk of our residential customers, that’s a $8.94 increase a month.

It’s a small hike compared to the one suggested by Alaska Waste. They were the only other company to bid on waste management in Sitka and proposed a rate increase of 100%.

Assembly member Matthew Hunter felt that, since rates haven’t been touched in Sitka for 10 years, 21% was good deal. “21 percent – that’s below inflation. That’s 1.9 percent a year for the last ten year, equates to 21 percent. When you actually look at how the cost of services have gone up, I think we’re lucky that we’re only looking at 1.9 percent increase every year for our solid waste,” he said.

Cost concerns is the main reason Alaska Pacific wants to raise rates in the first place.

Don Anderson, the company’s Operations Manager, said that several garbage trucks and other vehicles badly need to be replaced. “We’ve been living with a year to year contract, so our vehicles are really getting abused and past their work period.”

Furthermore, Anderson said the costs to remove Sitka’s waste off the island are rising, and that the price of recyclables are falling. That’s right. Your aluminum cans and cardboard boxes are a commodity that Alaska Pacific has to put on a barge and sell. City Administrator Mark Gorman said that commodity prices aren’t doing so well. “Aluminum is still high. I think #2 plastic is still high. But for example paper products is costing us more right now, to send them to be recycled, than if we put them in our regular waste stream,” Gorman said.

It’s expensive work, but needs to be done. Sweeney sent a memo to the Assembly, urging them award this contract now lest the city lose Alaska Pacific altogether. The company’s contract officially expired this spring and has been extended on a month-to-month basis.

City Administrator Mark Gorman assured the assembly that if they approved of the contract, a fee ordinance would follow. “There will be an opportunity for the Assembly to adjudicate on it again and for the public to speak on it,” he said.

Gorman added that the political order of operations for this contract is not ideal.

“There’s a little awkwardness,” he told the Assembly. If you approve the contract, then for whatever reason, the Assembly decides not to approve the [fee increase] ordinance, we’ll deplete the enterprise fund.” Basically, the city would have no sustainable way to pay for this contract.

So a rate increase for garbage collection is very likely on its way. Assembly member Steven Eisenbeisz had some reservations about that. He said, “I’m really worried about a 21 percent increase and looking at any ways to possibly reduce that.”

Eisenbeisz wondered if that could be accomplished by reducing operation at the Jarvis Street Transfer station. Under the contract, that station would remain open six days a week. Harmon said the contract is open to negotiation down the line.

In the contract, there is even a clause which says that, five years from now, the city can explore a commingled curbside recycling program. Instead of dropping off recycling at the Sawmill Creek center, Sitkans could gather their paper and plastic and such in a second bin and leave it on the curb.

The Solid Waste Advisory Committee seriously considered this option, but rejected the terms of Alaska Pacific to carry out the program. Alaska Pacific wanted to raise rates by $10.45 per customer, shut down the recycling center, and make curbside commingled recycling mandatory.

The Assembly passed the contract with Alaska Pacific, unanimously.

To see how the addition of a commingled recycling program would have affected rates, review the green column in the table below. 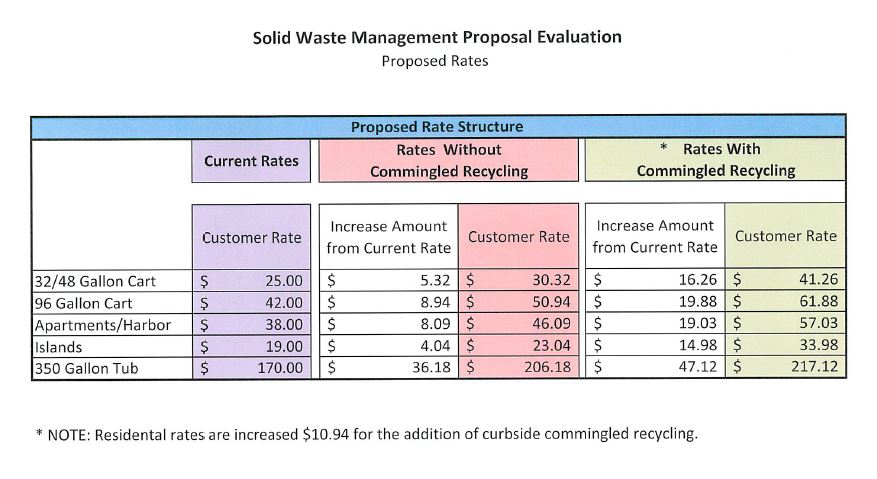