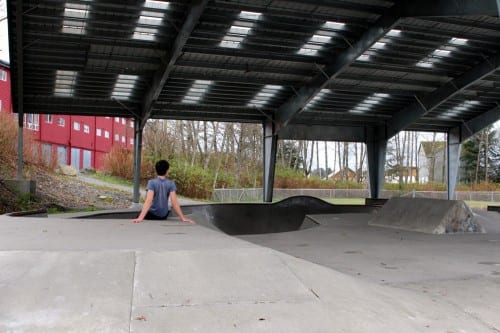 Greg Timby takes a break from skating to catch his breath. The 19-year-old is concerned about a recent crowd that’s been gathering at the skate park, sometimes bringing alcohol and pot with them. (Emily Kwong/KCAW photo)

Built in 2007, Turnaround Skate Park in Sitka is a playground for adrenaline-seekers of all skill levels, from kids on scooters to young adults on long boards. In recent years, however, the reputation of the space has been shaken by steady reports of alcohol and drug use by non-skating adults. Skaters have had enough with the unwelcome company. So, the city has decided to shed some light on the situation.

The skate park is at the bottom of a gravel hill, in the curlicue where PBYs used to make a U-turn. Sitka’s airport was relocated years ago and now, the only turnarounds you’ll see now made by wiry teenagers on wheels.

Greg Timby is one of them. “I’d say three different kinds of crowds come [to the skate park],” he said. “You have those who come to skate and that’s the guys who I hang out with. The skaters. The surfers of the asphalt.” 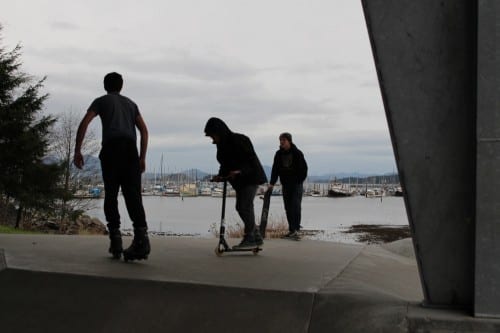 The skate park was built in 2007 and a cover added in 2011. Visitors range in age, from kids on scooters to older adults on skateboards. (Emily Kwong/KCAW photo)

Timby practices a form of rollerblading called “aggressive skating.” He’ll dash towards a concrete ledge, lift his skates off the ground, and for a frozen moment, just hang there. Touch his toes, or spin 360 degrees around.

“The rush of adrenaline when you come off a successful stunt and you land it…you can feel the crowd sharing your head,” said Timby. “You don’t have to have anybody around. It’s just powerful you know.” 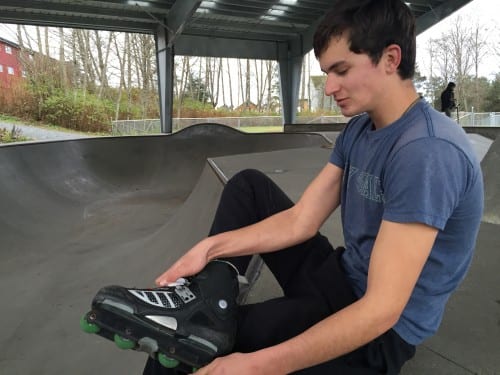 Timby has been skating since the age of four, when he found a pair of rollerblades in his family garage. He wants to get signed to a skating company one day. (Emily Kwong/KCAW photo)

The second crowd consists mostly of kids who come to watch. And then, there’s the third crowd, which Timby described as, “The adults who come here. And we don’t really talk to them because we don’t really know what they’re up to. We just kind of ignore them. A couple of the skaters are tough enough. They’ll go over and confront them.We need peace. We don’t like people laughing at our mistakes.”

In the past three years, Sitka Police have responded to 105 calls concerning the skate park: 40 calls in 2013, 35 calls in 2014, and 30 calls so far this year. Most were for suspicious activity, but some callers cited alcohol consumption, underage smoking, and drug use. Keenan Sturm, an 8th grader at Blatchley Middle School, was on his scooter one night and an intoxicated male enter the skate park.

“He fell a couple times and landed on his head,” said Sturm. “His head started bleeding. So, and I called the cops on him.”

This activity is seldom, but enough to unnerve Timby and his fellow skaters. Of the adult visitors, Timby said, “I shouldn’t be mean to them, but at the same time sometimes you just gotta let ‘em know, ‘You can’t do that kind of stuff here.’ It gives us a bad rap. Makes the skaters look bad. Which kind of sucks.

Ben White is the principal of Blatchley Middle School, which is right down the street from the skate park, and a father of three. White said, “I’ve yet to hear from any of the students or any of the parents that the skate park has affected school in this way or that way. As a parent, though, with young kids, when I’ve gone to the skate park there’s beer bottles. There’s cigarettes.” 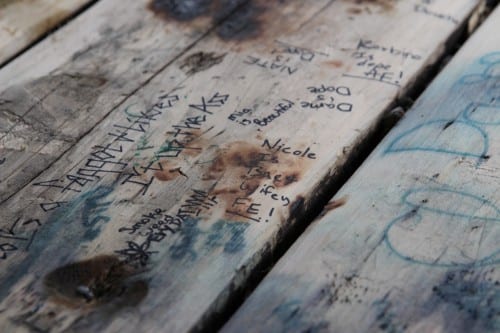 There is no supervisor for the park. Though signs deter garbage and glass, the area around the gazebo – particularly the Rotary Club Gazebo – is often littered with trash. (Emily Kwong/KCAW)

The Park and Rec Department is thinly staffed, with only three full time members for 30 sites. So, there is no designated supervisor or custodian for the skate park.

For White, that’s not necessarily a bad thing. “To be honest if somebody doesn’t stick a kick flip or something on their skateboard, they may want to say something that might be inappropriate and otherwise not said in front of an adult. It’s a part of growing up. Maybe they should have that kind of leeway. But to be down there and smoking and drinking and doing that kind of thing, that’s not something we want to accidentally support or let slide.”

Lynne Brandon, the former City Parks and Recreation manager, designed the park with the help of local skaters and always intended for it to be a safe space. “Having a space where you can get together with your friends and socialize — that’s pretty high order on the priority list for teenagers,” Brandon said.

And it is a pretty gorgeous skate park, built by the Seattle-based company Grindline Skateparks. Imagine 6500 square feet of gray concrete, undulating in enticing curves and sharp angles. There’s a double bowl and ramps and rail. There’s even a cover to protect skaters from that Southeast rain.

“One morning there was a mom’s group doing yoga inside the skate park while their kids were riding on skateboards and scooters,” Brandon recalled.”

Brandon secured $550,000 in grant money from six foundations to build it, including the Tony Hawk Foundation. While she’s disappointed by this illicit activity, she also says it’s common for any park to see bad behavior for a minority of users. She calls it her 3-5% rule. “3-5 percent, of whatever user it is, whether softball, whether it’s rifle range, whether its trail, negatively impact whatever the rec facility is.” 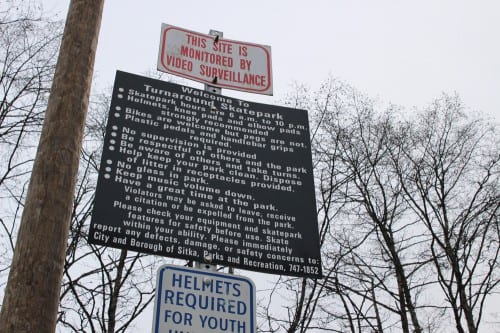 Last week, the Electrics Department installed a utility pole in the skate park. Along with Public Works, they are exploring wiring with park with lights and infrared cameras. (Emily Kwong/KCAW photo)

So how do you dissuade this 3-5 percent, while not cracking down on the many rule following users? How do you restore order in a space where there’s some chaos?

Lance Ewers, the Lieutenant with the Sitka Police Department, wants to “take the space back.” Three weeks ago, he approached Public Works and the Electric Department to install overhead lights and night time cameras in the skate park.

The logistics of the renovation are still being worked out, but Ewers hopes that if cameras get installed, they’ll have a direct feed to the police station. “The cameras that we are purchasing are the cameras that you can see at night. There will be no, ‘That’s not me.’ You can just look at the picture and see who it is,” Ewers said.

The Sitka Police have also increased their patrols of the area and skaters like Greg say it’s made a difference. “Especially since the police have been coming down, the people who were busting out weed and busting out alcohol, they don’t really come around as much. Which is kind of nice. But it’s also getting colder. We’re kind of wrapping up for the season too.”

With the sun setting earlier these days, it wouldn’t hurt to have more light to skate by. And while they’re at it, he adds that a real perk would be for the skate to get a new paint job. Something with flames to make the tricks look cooler. 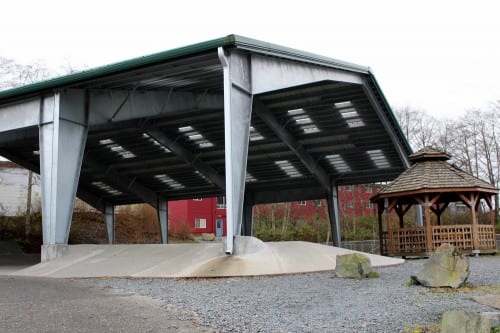 Turnaround Skate Park was built at the site of the city’s former airport. Though visible at night, the lack of overhead lighting makes it a shadowy spot at night. (Emily Kwong/KCAW photo)