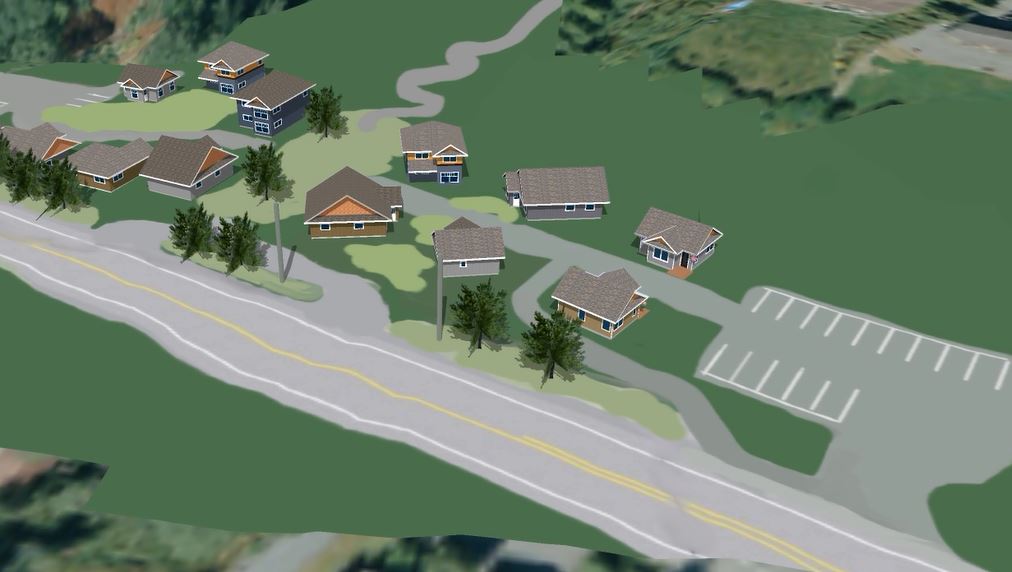 The above animation was created by Joshua Houston. The six homes on the right sit on Parcel #1306, which the Assembly sold to SCDC last night.

Last night (11-24-15), the Sitka Assembly finalized the sale of a portion of the Old City Shops property for an affordable housing project. With Parcel 1306, the Sitka Community Development Corporation is one step closer to building it’s envisioned cottage neighborhood. Though the ordinance passed, Assembly members wondered aloud about how to ensure that neighborhood would be built.

Though the vote was unanimous, the road getting there was a bit rocky and the biggest stone was a motion to postpone the vote altogether. Here’s Assembly Member Steven Eisenbeisz.

“I’m actually going to move to table this motion until we have time to explore more safeguards of public land,” said Eisebeisz. That motion was seconded by assembly member Tristan Guevin.

In order to understand the conversation that follows, let’s back up a step.

Sitka’s shortage of affordable housing has long been on the Assembly’s radar. In 2006, voters designated the Old City Shops site for an affordable housing project and the Sitka Community Development Corporation put together a plan to build a neighborhood on site with thirteen cottage homes. To keep the neighborhood affordable, buyers could only purchase the house, not the land. That’s how a community land trust works.

At its last meeting, the Assembly voted unanimously to sell a portion of public land: Parcel 1306, which is next to the vet hospital on Halibut Point Road. But when the time came to vote on it for the second and final time, Eisenbeisz voiced concern that the legal language in the sale agreement did not protect the land enough.

“What if SCDC is unable to come through with funding and nothing ever gets built on that land? There is nothing I see that would A) revert the land back to public use or in other way dispose of it.”

To fund construction, the SCDC is leaning heavily on a Tier 2 grant from the Rasmuson Foundation. The application for the grant is due in February. Board President Randy Hughey was concerned that if the Assembly tabled the vote and delayed the process, that funding opportunity would be jeopardized.

“There are a bunch of steps in working with Rasmuson Foundation to prepare. It’s quite an elaborate process with many steps. It’s not just that you send it in and they say, ‘Here’s your check or not.’ It’s a process that involves them coming here and a lot of research about it because we’re asking for a pretty substantial amount of money,” said Hughey.

Hughey didn’t specify how much money, but Tier 2 grants are by definition over $25,000. If awarded, SCDC plans for the grant to cover the costs on construction below ground and homeowners will bear the cost above ground.

For Guevin, the pressures of a grant application wasn’t a compelling enough reason to vote the sail through. “Doing our due diligence as the Assembly to ensure that this land truly is permanently set aside for affordable housing should really take priority over the grant application to the Rasmuson Foundation.”

Guevin’s biggest concern was the fate of the land should the SCDC dissolve and sell the land to a private entity. In that case, the ground lease for the land says the homeowner has the right of first refusal to buy the land itself. For Guevin, this possibility threatened the community land trust model. “By living the person who has that land lease the right of first refusal, in my mind, that takes the land…it brings it to the free market. It brings it to the private market and there’s no guarantee that that land would be prioritized for affordable housing.” Guevin suggested the Assembly wait two weeks to craft legal language with more safeguards.

SCDC Board President Randy Hughey assured the Assembly that putting the land in private hands is not likely. “I cannot imagine a scenario in which we would want to do that. That would appear to me a violation of a trust of a relationship that we’re establishing with the city to work as partners and develop affordable housing. Our goals, objectives, purposes, and why we work as a band of volunteers is to try to create affordable housing.”

Hearing that was a reassuring message for Guevin. “I think that was my main concern is we do need to have this discussion out in the public domain and the public does need to hear that SCDC is committed.”

City Administrator Mark Gorman endorsed the sale sooner rather than later, saying that that Sitka is not the only city with an eye on the community land trust. He explained how SCDC Executive Director Mim McConnell, who recused herself from the vote as Mayor, spoke on a panel last week at the Alaska Municipal League Conference in Anchorage.

For Eisenbeisz, it was this level of scrutiny made it even more important the Assembly sell public land with caution. “It’s not to try to stop this project wholly. But I want to make sure we do this right the first time. Everyone is going to be looking at this project. This is a model for the state. Let’s do this right.”

In the end, the motion to table was voted down and the ordinance to sell the land was passed, on second and final reading. The SCDC intends to acquire parcels 1410 and 1414 at a future date. But for now, there’s a grant to apply for.