After vandalism, caretaker for the dead receives unexpected help 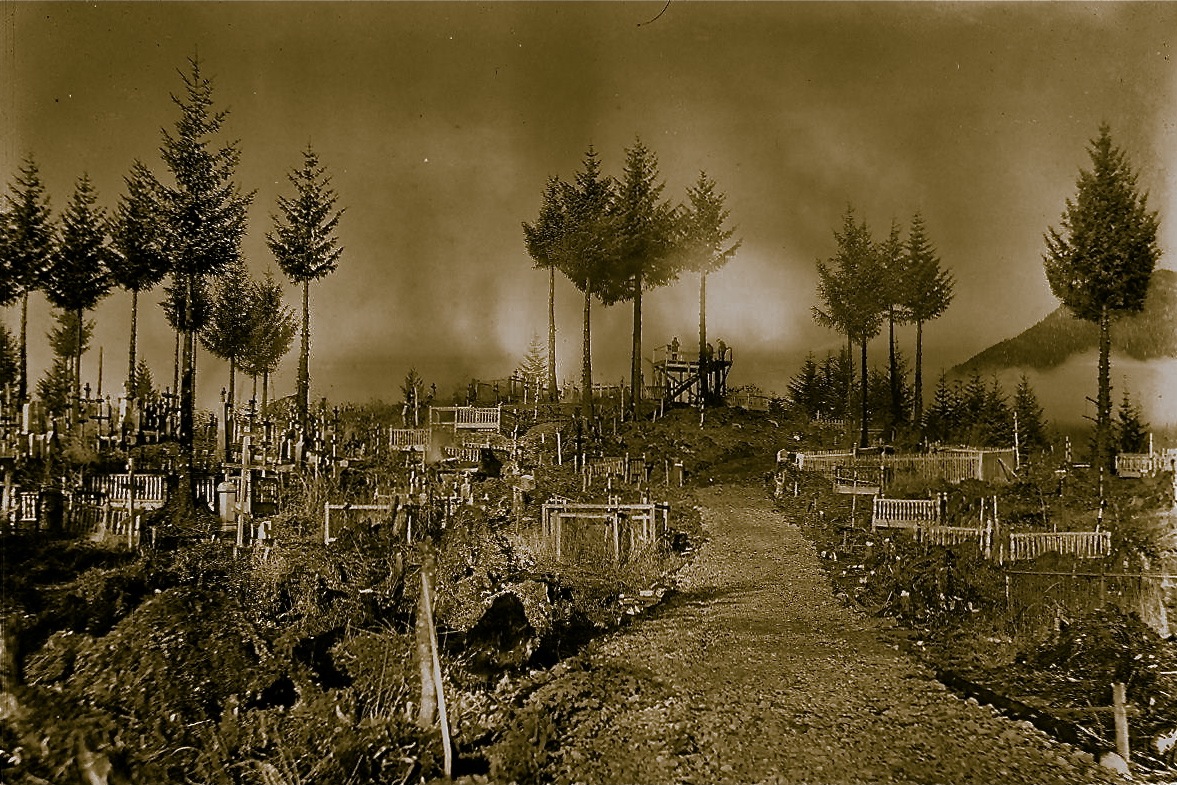 This fall in Sitka, the Russian Orthodox Cemetery was vandalized four times by a group of juveniles. Bob Sam, the 30-year volunteer caretaker, said it “broke my spirit.” (Photo courtesy of Bob Sam)

On a clear night in September, a group of vandals desecrated a 200-year old cemetery in Sitka, tipping over headstones. The caretaker, 61-year old Bob Sam, discovered the damage the next morning. Some of the marble slabs were broken beyond repair. This is the story of how the cemetery caretaker enlisted the help of local police to protect the rights of the dead.

Bob Sam tends to keep to himself. He always wears jeans, patched with dirt on the knee from the hours spent packing earth. He is a slight man, with the voice of someone who has spent a lot of time with the dead.

“Most humans they think about life,” Sam said. “They don’t think about death so much. But somebody has to do this work.” 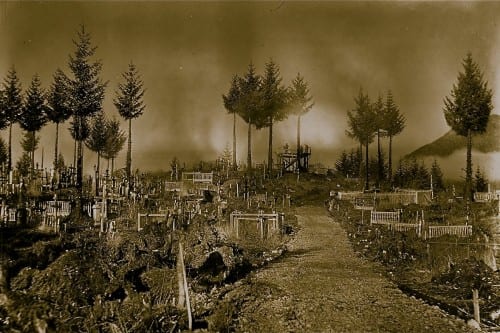 The cemetery in the 1900s. Sam estimates it is the final resting place for 1600 bodies, 400 of which are marked. All are connected with the Russian Orthodox church and many are Tlingit. (Photo courtesy of Bob Sam)

Sam’s life’s work has been restoring Sitka’s Russian Orthodox Cemetery, which he visited often as a child. One day, when he was 7 years old, he discovered his grandmother sitting solemnly by the family plot.

“My grandmother had kind of a tear coming out of her eye,” Sam said. “There was beer cans all over the place and brush was overgrown. I just quietly looked at my grandmother and I says, ‘Don’t worry grandma. I’ll fix this place for you.’” Sam began clearing the cemetery in 1986. The land had become a dumping ground for trash and partying. He found many pounds of beer cases and empty bottles. (Photo courtesy of Bob Sam)

It was a promise he kept. Sam returned to Sitka at age 30. He discovered graves desecrated, the headstones buried by mounds of trash, and the clearing claimed by the rainforest. So, he got to work — on the longest day of the year. June 21, 1986. That summer’s cleanup required 30 city dump trucks to haul away the garbage. Community members helped with the heavy lifting. And now?

“There’s something special about this place now,” Sam said. “People can feel it.” 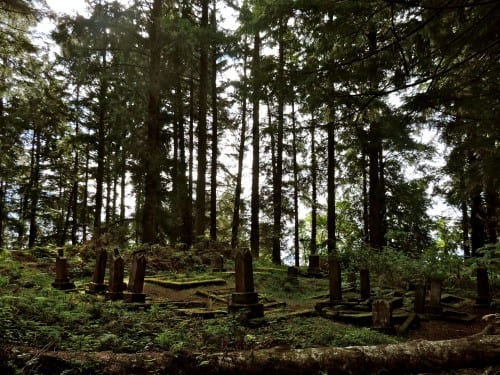 The police plan to install infrared cameras in the cemetery to monitor the activity of the living in the presence of the dead. (Photo courtesy of Bob Sam)

The cemetery clearing is pristine – sloping hills dotted with pillars of white marble and bird song. The first time I visited him there, Sam guided my eyes to the top of an enormous cedar tree.

“That’s a fourth-generation nest of the Raven I made friends with 30 years ago,” Sam said.

This summer, he personally washed all the headstones, removing dead pollen and revealing the natural patina of the marble. There are 400 of them and the vast majority mark Tlingit and Aleut graves.

“When you’re washing a headstone, it’s no different than washing somebody’s feet,” Sam said. “And you experience a kind of humility. No matter what they do in life, they should have a respectful death.” While almost all the headstones have been set upright, the damages estimate is in the tens of thousands. (Photo courtesy of Bob Sam)

Sam had just finished washing the headstones when, on the morning of September 12th, he discovered the cemetery had been desecrated. The biggest headstones were knocked flat to the ground.

“My spirit broke,” he said.

Sam hadn’t touched alcohol for decades, but that day, he ordered a beer. “The beer was sitting in front of me,” he said. “But then I thought about it. I can’t live that life. So I got up and I called the police.”

The officer he got on the phone was Lieutenant Lance Ewers. Ewers told Sam to meet him at the cemetery, and spent the next hour taking pictures of the damage. In Alaska, desecrating a cemetery is a Class C felony. 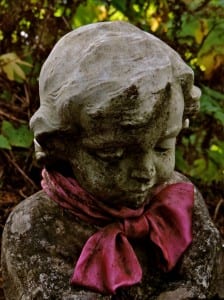 Some of the headstones are over a hundred years old. This summer, Sam hand washed them all to honor the families that purchased them. (Photo courtesy of Bob Sam)

“We started doing some extra patrols in the area,” Ewers said. “And then I saw Mr. Sam the other day and together we came up with an idea of what it would take to fix these tombstones because some of them are 700 lbs. And he said, ‘You know, it would just take muscle, a lot of muscle.’”

And muscle is exactly what Ewers found. He banded together a dozen recruits from Sitka’s Trooper Academy and they set the headstones upright. There was a heavy downpour that night. Sam watched them work in the mud.

“I always thought that I was the only that cared about this place, which was wrong,” Sam said.

The vandals would strike three more times – on September 13, September 22, and October 25. Each time, recruits from the Academy, Sitka Police, and even some firefighters volunteered to lift the headstones out of the dirt and stand them upright.

“And they would assure me every single time, ‘Bob, if you need any help in anything, just give us a call.’ Like a friend would,” Ewers said. 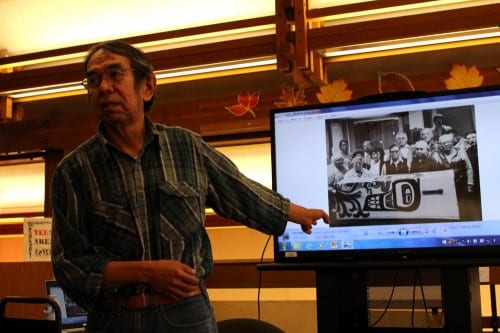 Sam gives a presentation at the library. He points to a picture of himself with Tlingit elders, who encouraged him to pursue his interest in cemetery caretaking. (Photo courtesy of Bob Sam)

The culprits were eventually caught and police plan to install infrared cameras to permanently monitor the activity of the living, in the presence of the dead.

Sam considered giving up this work entirely. But he changed his mind when seeing how the community took the cemetery under its wing.

“These are Native American graves and to have people from all walks of life come in to do the things that they are doing and their whole heart and soul is into it really touches me,” Sam said.

So, Sam continues his work because he believes that one day a generation who wonders who they are will wander into the cemetery and find an answer written in stone. 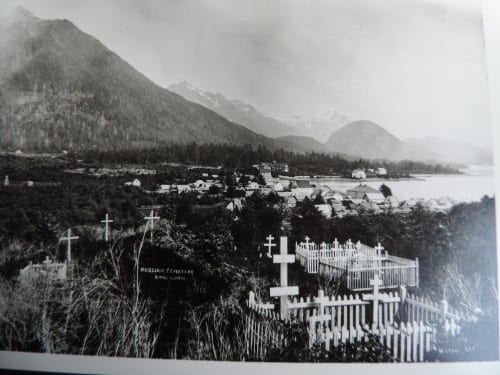 The Russian Orthodox Cemetery in an undated photo. Sam says the oldest marker he’s found is from 1833. (Photo courtesy of Bob Sam)