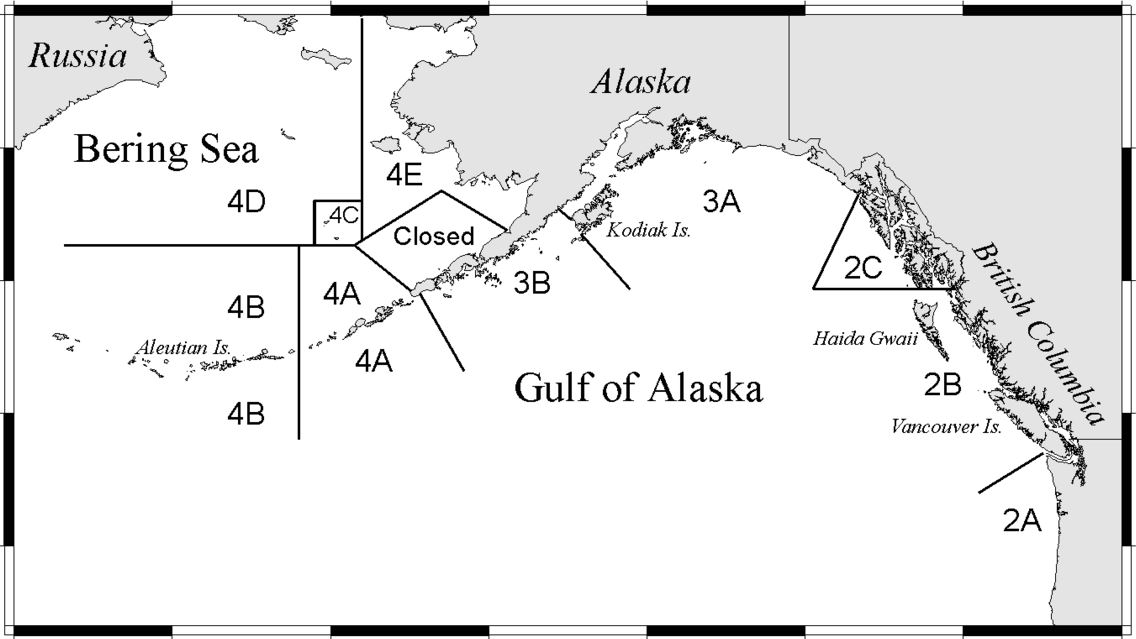 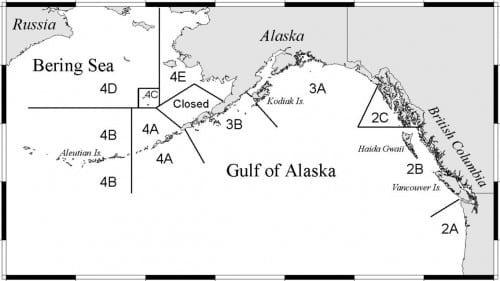 Commissioners heard data supporting increased halibut harvests in 6 of 8 sub-areas in the Gulf of Alaska.

Commercial and sport fishing fleets in some parts of Alaska will be allowed to harvest more fish, under recommendations presented to the International Pacific Halibut Commission.

Commissioners listened to the reports of staff biologists at their interim meeting in Seattle Tuesday morning (12-1-15).

The interim meeting of the International Pacific Halibut Commission is our first look at the huge volume of data the IPHC collects that informs a big decision coming next January: How much halibut will be available for harvest from the coast of Oregon to the Bering Sea.

For halibut users in Southeast Alaska, the number could be ticking up — maybe 8-percent, or by over 300,000 pounds.

In Southcentral Alaska, though, the trend is the other direction — the commercial and sport fleets may see their harvests reduced by 7-percent, or three-quarters of a million pounds.

Southcentral has had the lion’s share of the halibut harvest over the last decade or so.

Ian Stewart is a staff scientist for the commission.

Area 2 is how the IPHC defines the Pacific Coast, from Oregon to Yakutat. Area 3 is the Central Gulf coast, including Kodiak and going as far as Unalaska. Area 4 is the outer Aleutian Islands and the Bering Sea. And these three main areas are divided into a total of 8 sub-areas. Next season, commission scientists expect there will more halibut in three-quarters of the 8 areas.

The slight rebound of halibut stocks in Area 2 remains a mystery. Halibut fishing was heavily concentrated here in the 20th century, and later moved across the gulf. Bottom trawlers don’t fish in Area 2, so wasted halibut — or bycatch — is less of a problem.

Stewart didn’t have a complete explanation.

“So across Area 2 we’ve seen some of the more positive changes in the biology — as well as the catch rates. I don’t know whether that’s because the fish that are growing faster and are generally more productive tend to move to Area 2 with greater frequency, or whether the fish in Area 2 tend to be more productive because of better growing conditions.”

The fact that there are generally more halibut available in Area 2 is good news for Southeast fishermen. Sitka longliner Jeff Farvour tuned in the webcast of the Seattle meeting. In an interview afterwards, he sounded hopeful.

“Overall on a coast-wide level, it looks like things have stabilized. They’re still pretty average — below average — on a historical perspective, but it’s always good to see some stability. And even some growth.”

Farvour is a long-time advocate for the commercial halibut fleet, and been in the teeth of allocation battles. But he says he’s glad to see the 30-percent increase in guided sport fishing clients last year, and that there’s enough halibut to accommodate that growth.

But he remains discouraged by the cost of investment in commercial halibut fishing — which is regulated under an Individual Fishing Quota system, or IFQs. Farvour says the price has gone “through the roof.” The most recent price listed for IFQs in the Central Gulf — or Area 3 A — was $58/lb for 4,600 pounds — that’s over a quarter-million dollars just for access to the fishery.

“It does seem crazy. I know in Canada they’re even more than that. Just because you see that advertised that doesn’t mean that’s what they’re going to get. Sometimes people start speculating or throwing numbers out there.”

IFQ prices in other areas — Area 4 for instance — are considerably less, but still high relative to permits for other fisheries. Farvour says communities such as Sitka are beginning to explore opening “permit banks” to assist young fishermen hoping to buy IFQs. He bought IFQs when they were cheaper — but the quota larger — and thinks that they remain a good investment over the long term.

The interim meeting of the International Pacific Halibut Commission is just two days, and mainly consists of scientific and committee reports. The six commissioners — half from the US, half from Canada — will make their final decision on catch limits at their annual meeting beginning Jan. 25 at Centennial Hall in Juneau.