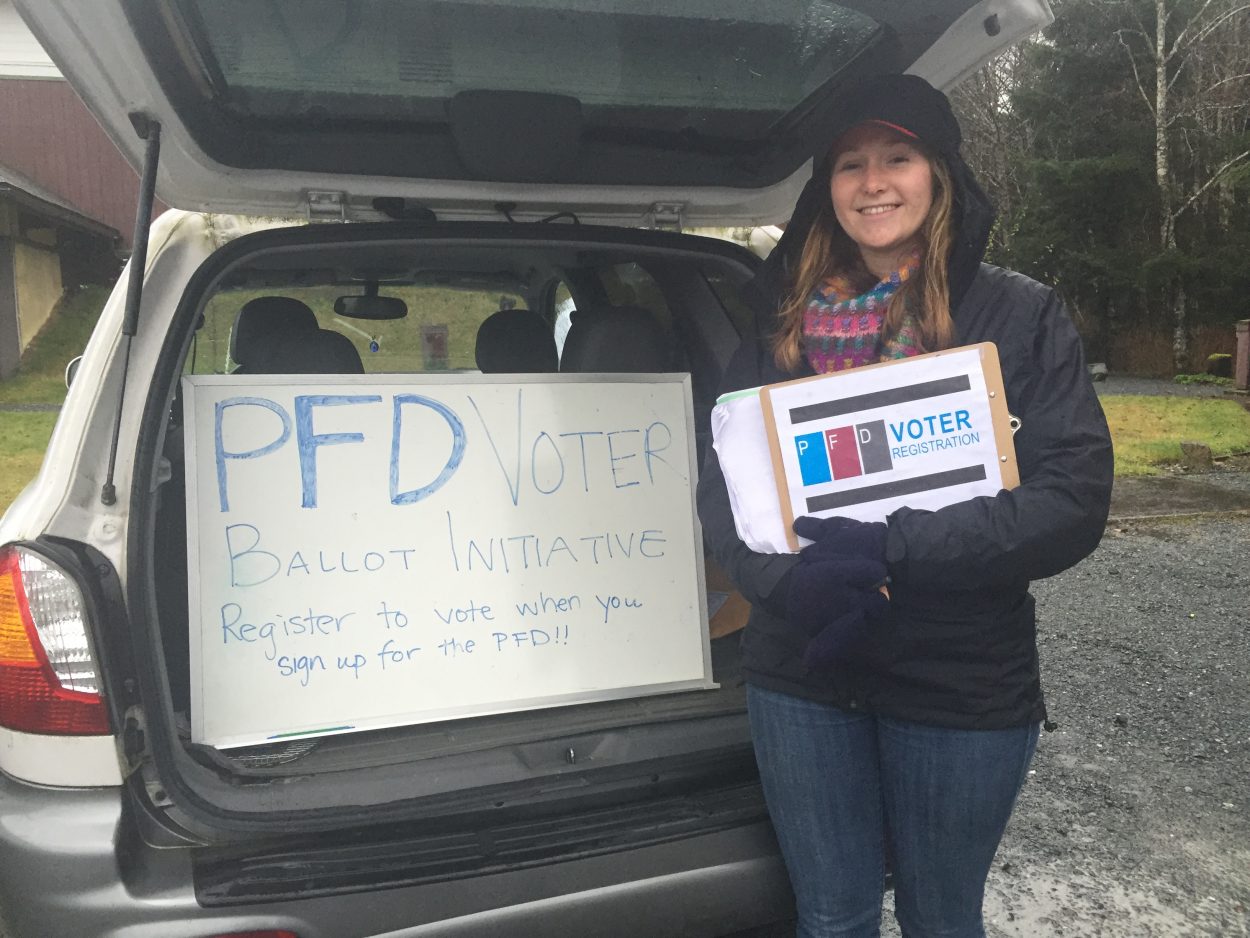 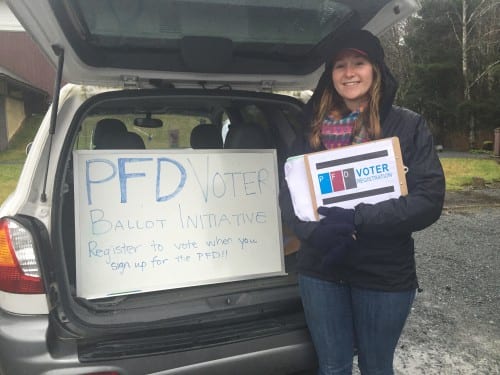 Sitkans have joined a statewide effort to make it easier for people to cast their ballots at the polls. The push to get Alaska residents registered to vote at the same time they sign up for their permanent fund dividends started in Anchorage this fall, but Sitka has become an important part of the equation.

Are you registered to vote? Have you signed the PFD voter initiative?

Sophie Nethercut hit the streets one day earlier this month to gather signatures for the PFD voter ballot initiative. She’s canvassing for the 700 autographs needed from Sitka in order to win the idea a spot on a ballot in 2016. So far, they have 400.

To get something on the ballot is a lengthy process. Petitioners must submit signatures from a 10 percent of voters from three-quarters of the house districts in the state and within those house districts, 7 percent of the last election’s voters. Sitka is one of the districts the Anchorage-based campaign is relying on. Statewide, the campaign is shooting for some 40,000 signatures, to give a reasonable margin in case some are invalid.

Zoe Kitchel, Sitka’s field organizer for the campaign, says states across the country have been making it harder for people to vote by eliminating early voting opportunities and requiring government issued ID. She says this ballot initiative would help guard against that and streamline the process.

“The two goals are first to reduce the amount of paperwork and bureaucracy we deal with on a day to day basis,” she said. “And also to make it a lot easier for a lot of people to make it easier for them to get to the polls and to be able to vote at the polls.”

The PFD voter initiative is modeled after a similar one in Oregon, Kitchel says. In 2014, voters there proposed and passed the “motor-voter” law, which automatically registered people to vote when they renew or apply for a driver license or state ID at the DMV.

“Eighty-five percent of Alaskans actually register for the PFD online and that is a much larger portion of the population than apply for driver’s licenses every year so we would be catching so many more people than we would if we set it up exactly like Oregon,” Kitchel said.

This year, more than half a million Alaskans received PFD checks. The Division of Elections estimates that some 70,000 more people will be registered if this initiative is passed. Here’s Nethercut:

“This ballot initiative would be a no-brainer, I think,” Nethercut said. “So far no one has refused to sign.”

While Kitchel and Nethercut have met little opposition in Sitka, there have been some naysayers. Kitchel says some people think that if others didn’t bother to register they shouldn’t vote.

“Our goal is for more people to vote but all this is doing is registering people and people will still need to make that decision to actually go out to the polls,” she said.

Others are fearful of giving too much information to the government. But, Kitchel says, Alaska’s online PFD registration system has some of the strictest security – and residents are already volunteering their personal information for their PFD checks anyway.

“It is interesting to think that people are so willing and so excited to get free money from the government but I’d like to think if you are benefiting from that then you’d also like to be a part of the process of deciding what that government does and being a part of the decision-making on a larger scale,” Kitchel said.

The campaign is making a final push in Sitka over the next couple weeks with hopes of submitting its signatures to headquarters in Anchorage by the end of the month. In the meantime, Nethercut will connect with voters wherever she can — on downtown streets, or by the front door of SeaMart. . There’s also a petition at Old Harbor Books.

The initiative also includes an opt-out provision for people to easily deregister themselves within a month of signing up for the PFD. If it makes it on the ballot, voters should see it in an election next year.