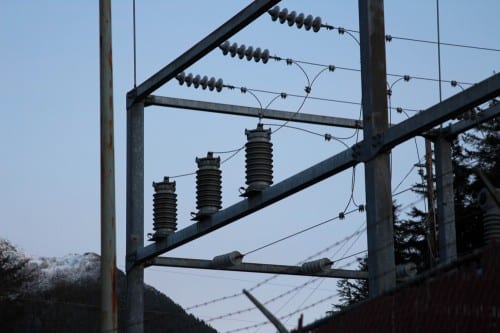 At a work session on Tuesday (12-08-15), the Assembly was briefed on Sitka’s power crisis – due to aged transformers and a failing transmission line. (Emily Kwong/KCAW photo)

During a work session an hour before its regular meeting last night (12-08-15), the Sitka Assembly was briefed on the power crisis before the Electric Department. Deferred maintenance, particularly at the Marine Street Substation, has prompted the department to fast track a solution. Electric Department Director Bryan Bertacchi has a plan, but it will take the money and the political will of the Assembly to pull it off.

Bryan Bertacchi has peered into a crystal ball and the future is dark if the city doesn’t act now. At stake are all three aspects of power delivery in Sitka: generation, transmission, and distribution.

“All three of those have to be in tact to be able to get that energy, that power, to your house or to your place of business – so when you throw the switch, you’re satisfied that the electricity is reliable or there when you need it,” Bertacchi said while addressing the Assembly. “And if any one of those pieces isn’t there, I can’t get it to you to be able to do that.”

Let’s walk through each of these one by one, starting with distribution. Sitka has three major substations: one at Marine Street, Jarvis, and the Gary Paxton Industrial Park. Bertacchi explained, “Marine Street serves 80% of the Sitka customers and the transformers there are 35 years old.” 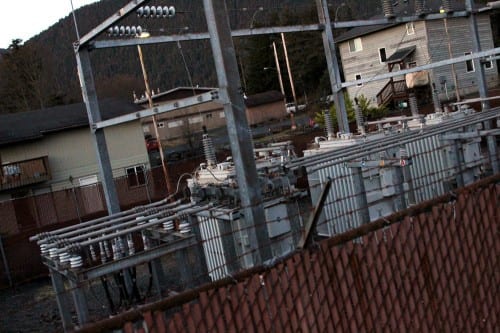 The transformer at the Marine Street substation has a high likelihood of failing in the next 15 years. The back-up has been shipped off the island for repairs. (Emily Kwong/KCAW photo)

The transformers are basically ticking time bombs, whose expiration date could come anytime. “The statistics indicate that within the next 15 years, there will be 100% failure of those remaining three transformers,” he said.

If the transformer at Marine Street were to fail today, 80% of Sitka – would be without regular power. Picture thousands families and businesses with 2-6 months of rolling blackouts, as the city waits for a new transformer to arrive. “I don’t think that’s acceptable,” Bertacchi said and arranged the work session to offer solutions to the Assembly now

Two other features of Marine Street are worth noting: the substation is too small to accommodate booming growth on the north end of Halibut Point Road and was built without any redundant power source in the event of failure. It had a back-up transformer sitting nearby, but that failed in tests last month.

A line crew shipped the spare off for repairs and narrowly avoided a power outage in the process. Bertacchi thanked them during the work session. “Those folks working on Saturday when the weather was good to be able to do it were fantastic because it avoided cycling – turning the other transformers on and off again – and the greatest likelihood of a failure is turning those transformers on and off again.” The problem is that right now, the Marine Street substation has no spare transformer.

To fix all this, Bertacchi is proposing that the city build a new substation entirely. There’s a pad in place for a potential site on Kramer Lane.

“If we wanted to go that way, which I’m recommending, we could buy that transformer right away – it might take 6-7 months to get – but we could set it over at Marine Street while we’re waiting to complete HPR North, which might take a year and a half or two years,” Bertacchi said. “If we really had an emergency, we could find some way to hook that up to supply that community rather than have a long extended outage or rotating outages.  ”

The proposed cost of the HPR North station is $11 million.

The second challenge is transmission, which is cloaked in it’s own unique doomsday language, though not as dire. Basically, the transmission line that runs on a steep grade from the Blue Lake Power House – called the 69KV – keeps failing.

The department has been extensively trimming trees to mitigate brownouts, but to really tackle the issue, Bertacchi wants to make another purchase: of a new overhead transmission line, which would cost $4 million. “We’re talking this time about the outside of the road – not the inside – which would spoil the view and there’s a good location over there,” he said. The proposed transmission line would run behind Golden Alaska Lodge.

And when it comes to generation, the third leg of the power stool, Bertacchi wants to inspect Green Lake Power Plant and swap out a smaller diesel tank at Jarvis Street. His first week on the job, the 200,000 tank spilled 2,500 gallons of fuel. Bertacchi wants to downgrade it to a 40,000 gallon tank.

So what is the final tally of all these fixes? The department’s latest estimate, through the consultant Electric Power Systems (EPS) out of Anchorage, is $15.7 million. The problem is, the city doesn’t have enough money to set those wheels in motion. And it still needs to make it’s 1.25% bonding covenant, to keep paying off the Blue Lake Dam.

“No matter what this next year, we have to have another rate increase,” said City Finance Director Jay Sweeney to the Assembly. “We simply do not have the electrical sales at the right rate in order to generate the required amount of cash flow from operations in order to meet our 1.25% covenant. We would have to have probably a cold winter for the ages to get us anywhere near what we would need.”

So the real question before the Assembly is this: do you increase rates this year just enough to keep up with bond payments, like it did last year? Or do you increase it a little more to fund these much needed capital projects – a new substation and transmission line?

Sweeney put it this way. “Do we wait and take on a calculated risk of a catastrophic failure, or do we look at some mechanism necessary now to renovate and repair it?”

Sweeney told the Assembly he’s in favor of the latter, but it will ultimately depend on how much of a rate cost citizens can absorb. There’s no recommended plan yet. But Bertacchi and Sweeney hoped that in kick-starting the discussion, the Assembly would begin to see the light.