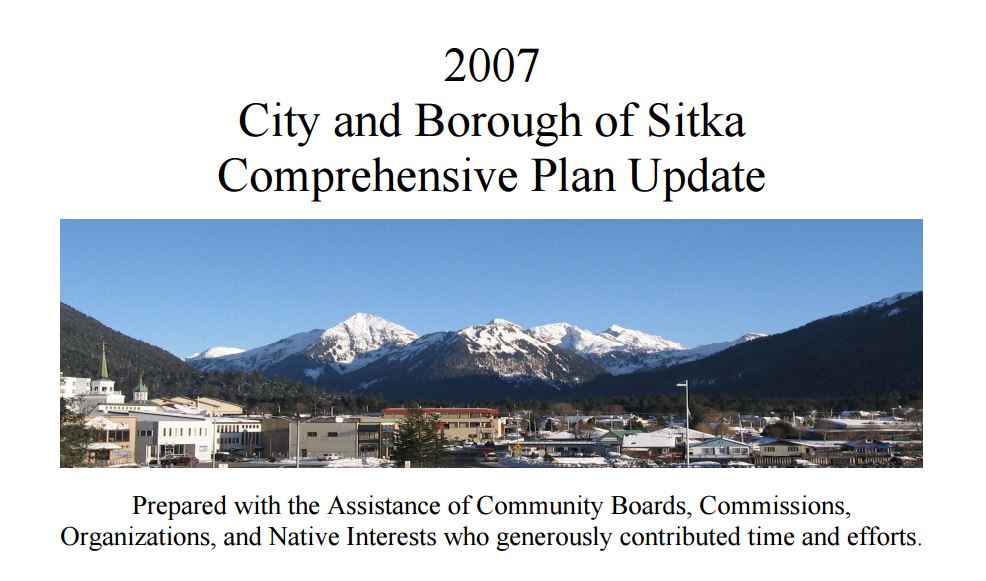 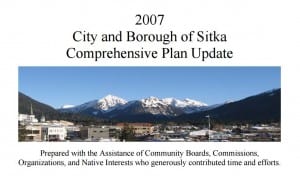 Planning documents refer to the 2007 Comprehensive Plan, but the document is seldom used, according to Maegan Bosak, Sitka’s director of Community Development.

Sitka took its first step toward revising the roadmap it follows for development.

The Sitka Planning Commission last night (Tuesday 1-5-16) recommended that the planning department proceed with an in-house overhaul of the Sitka Comprehensive Plan.

The document has been revised many times since the late 1950s, sometimes by paid consultants. This time through, however, the commission would like to see more citizen involvement.

The Sitka Comprehensive Plan is our guide book. No major decision in the community on transportation, utilities, recreation, and housing can proceed without first consulting this important document right?

“So, I would just ask how many of you have read the current plan, front to back? (Silence.)That’s the problem. It’s over one-hundred pages. It sits on a shelf. It’s not used very often. We need to change that. It’s not doing anyone any good.”

City planner Mike Scarcelli would like that to change.

“In 2015 we saw 34 variances. I think that’s indicative that perhaps we need to make the decision as a municipality, across the board to amend our development standards. So instead of doing only variances at this commission, we can focus on community development a bit more.”

Scarcelli’s rationale for digging deep into Sitka’s plan was simple: Times are changing. Money is tighter, and Sitka is going to have to become more self-sufficient.

Referring to a powerpoint screen, he described even larger questions that planners will reckon with in Title 22, Sitka’s zoning code.

“The harder ones are going to be: How are we addressing, as a community, global warming? There’s a phrase in that field, Think Global Act Local. We all have to do our share. How is our Title 22 (Zoning) creating something that might reduce our carbon footprint, reduce our energy use?”

Addressing global warming is increasingly becoming a shared responsibility, but Scarcelli pointed out other challenges that are more specific to Sitka.

“Across the nation, and especially in Sitka, art and culture is something that tends to be identified. Environmental concerns tend to be identified. People talk about affordable housing and economic development. Next is to create measures for that and accountability.”

Deliberation among commissioners was limited. Commissioner Darrell Windsor said it was “a no-brainer” for Sitka to go with an in-house revision of the plan, with the city anticipating million-dollar deficits next year.

But commissioner Tamie Parker Song didn’t want to see the work fall exclusively to staff. She thought the process was as important as the product.

“I think how collaborative this feels to the citizens of Sitka, and whose voices are included and in what way they’re included — just the process. No matter what document emerges, that process will have long-term effects I’m sure.”

Commissioner Debra Pohlmann was concerned that too much citizen involvement would bog the process down, because of the seasonal nature of fishing and other demands on Sitkans’ time.

But, speaking from the public, Libby Stortz suggested that the most effective planning involved citizens, because administrations come and go.

Also speaking from the public, Carolyn Servid noted that Sitka had previously undertaken a major citizen-driven planning effort. She was frustrated that it was ignored.

“It was two years that people spent doing a comprehensive plan. They came up with a citizen’s comprehensive plan that was not adopted. So I think that this whole issue of the way that you involve the public — I’m delighted that’s what you’re really wanting to do — because as Libby (Stortz) said, it’s vital that a comprehensive plan for this community be driven as much by the people who live in the community as by the city administration.”

In the end, the Planning Commission decided to recommend that the assembly authorize the Planning Department to develop a “staff-facilitated” citizen process to revise the Comprehensive plan.

Resident Scott Saline was encouraged by the approach.

“Thanks for being here. It gives me hope that my kids might be able to stay here. We live here because it’s not like any place else. And our city code is just like — or worse than — any place else.”

If the assembly gives the nod, the Planning Department expects the revision of the Sitka Comprehensive Plan will take about 14 months. Their hope is to bring a different chapter of the plan forward to one of the Planning Commission’s two regular meetings each month for a public hearing.

The budget for the project is $30,000, which Maegan Bosak said would be spent on an interactive mapping tool, a community survey, and public participation.