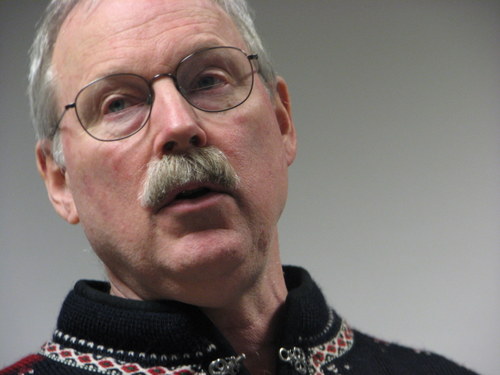 “I want to see our district be treated fairly with the population centers in Anchorage and Mat-Su. They clearly have the votes to do whatever they want in the legislature,” Stedman told KCAW.

Republican senator Bert Stedman, who serves Southeast’s islands from Icy Strait to the border, will join his fellow legislators as they gavel into session on Tuesday (01-19-15). This session promises to be tense, with a $3.5 billion budget deficit to close and oil prices tumbling. KCAW’s Emily Kwong sat down with Stedman to talk about his session priorities. He says he wants to ensure that – in the battle of what to cut – Southeast gets a fair deal.

In 2008 was a different time for Senator Bert Stedman. Money was pouring into Alaska’s coffers. Light crude oil was pushing $100 a barrel. And the Senator was co-chair of the Senate Finance Committee. Reflecting on those times, Stedman said, “It would be nice if we had surpluses forever and you got to sit there and be one of the main guys who to cut up the pie, but that’s not political reality.”

Now, the political reality requires Stedman to play defense and go to bat for Southeast’s interests, in a field dominated by players from the Railbelt. Stedman is the only Southeast lawmaker on the Senate Majority Caucus and sometimes, the lone voice of dissent.

His staff – Randy Ruaro, Dave Scott, and Melissa Kookesh – are from Ketchikan, Metlakatla, and Angoon respectively. “So what we have is a Southeast flavor within our office,” Stedman said and during last year’s session, that meant keeping a close ear to the ground for budget decisions that would impact the region.

“For the first time since I’ve been in Juneau, we played virtual defense – [Ruaro] and myself – from 7:30 in the morning from 5:30 at night when we walked out, 6 o’clock. Everyday. Trying to protect the district,” Stedman said. “It just went on and on and on. There were blowups from one end to the other.”

Take the Alaska Marine Highway System. Stedman thinks his colleagues undervalue its importance – not only as an economic driver for Southeast, for fishing and tourism, but as stitching in the region’s social fabric. “You look at the community members that go to potlatches and family functions…and that whole concept of social interaction and how we relate and work together in Southeast is something that’s totally foreign in Anchorage,” he said.

About 40% of the Governor’s Department of Transportation budget is dedicated to the Alaska Marine Highway System.  The summer schedule is out, but Stedman anticipates that the funding will still be threatened by Railbelt legislators. “Their response to that is we have the population, you don’t. You can take an airplane or a barge.”

Stedman, who will sit again on the Transportation Committee with Juneau Senator Dennis Egan, says these moments are particularly tough. “You look across the table and you have to bite your tongue. When have we closed down the Seward Highway or the Dalton Highway to save money in the budget?”

Stedman also wants the state to maintain an adequate level of public safety for Southeast- from state troopers to prosecutors – and provide sufficient funding for education. “If we mess up education for four to five years of a block of kids that are in the system today, we can’t fix it because they grow their wings and are gone,” Stedman said. ‘We’ll work through this financial mess, but let’s not have any legacy problems with some of our age groups when we do it.”

On the other side of the coin, when it comes to saving the state money, Stedman is very critical of Alaska’s current oil tax structure. Under SB21 last year, Alaska gave back more than 1 billion annually in tax credits and rebates to oil companies.

For Stedman, that indicates the policy is broken. He compared it to the following: “You go to a farmer in North Dakota or a rancher in Texas. You tell them price is down. And you want the rancher to pay you to take their oil. See how long you stay on their land.”

He continued, “We are not a Third World country. We are not a territory.We are a state and need to act like it – an owner state.”

Stedman is particularly critical of tax credits to oil and gas companies in Cook Inlet. “It’s 400 million and that goes directly towards subsidizing the electrical rate and heating cost in Anchorage. We can’t afford it. It’s not fair to the rest of the state. And it comes up year on year,” he said.

If you ask him, Stedman wants to zero out tax credits entirely, but he called any potential discussion around this topic a “knock down, drag out fight” in the legislature. He’s also curious about freeing up $900 million used to inflation-proof the Permanent Fund, which is diversified into other holdings like real estate. This is a far more comfortable discussion for him then, he said, changing the permanent fund dividend.

But at the end of the day, Stedman knows he’ll have to be flexible. “I think the magnitude of our financial bind is such a high hurdle to repair  that there should be no sacred cows on the table. The devil is in the details and the order in which they’re implemented.” And that will require making compromises with others in the majority caucus, who Stedman said will, “set the direction and tone of what we’re going to do.”

Despite these concerns, Stedman has a lot of faith in one thing: the democratic process. “Probably the best process – I’m sure it is the best process – on the planet. But it is messy and it’s slow. So don’t expect a solution this year for the financial predicament of the state. I would suggest we’ll get a partial solution.

He’ll continue as Chairman of the Senate Health and Social Services Committee. In session, Stedman also plans to continue pushing forward legislation to control the sea otter population and to reverse the DOT’s decision that headlights have to be on at all times on certain Southeast highways.