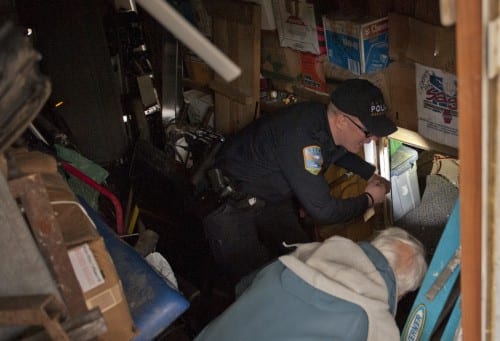 A fugitive from justice in Sitka was arrested Wednesday evening (1-27-16), after police located him hiding in a tunnel system he had dug under a trailer park.

It took eight officers to extract the man, who had been missing just over two weeks, and who had apparently spent much of that time burrowing.

Sitka police staked out the home of 42-year old Jeremy Beebe when he failed to report to jail on January 12 to begin serving a 21-month sentence.

Lt. Lance Ewers says that Beebe eventually returned to his home in the Vitskari Trailer Court, but when officers followed him inside to make the arrest, he had disappeared.

“And we find this dungeon door. It was like a door, you go down these stairs, and it was locked from the inside — so that was a clue. So we got the battering ram out and went to town on the door and blasted it open with the battering ram and entered the dungeons.”

Ewers says the main underground area had a dresser and a TV, and could fit four officers — all standing upright — easily. But there was more to Beebe’s getaway plan.

“When we turned the corner, there was this long alleyway, if you will. And at the end of the alleyway one of the officers located Beebe. And he had a black sweatshirt on. And he told him, I see you, you’ve got a black sweatshirt on, come out, let me see your hands. And he immediately took off and went out of sight, and we couldn’t find him.”

Ewers says that the tunnel system was extensive. Officers resumed the manhunt outside the trailer, when it looked like Beebe might try to give them the slip through an alternative exit.

“There were all kinds of boats and trashed vehicles and car parts, and motorcycle parts everywhere on the outside. We just contained the area, and started slowly dismantling the areas that looked like they were hiding entrances to this system of tunnels. And then we found another entrance near the back (of the trailer) where he was, and located him. One of the officers grabbed him by the ankles, but he pulled away from the officer and shimmied back into the tunnels. Another officer went around the back, ripped off the siding of the house, and just drug him out.”

Beebe was taken to the Sitka jail. After consulting with the fire chief, Ewers says the Sitka building official was summoned to inspect the property, and to determine if it was now unsafe to occupy.

Jeremy Beebe was scheduled to serve 21 months in prison for several crimes ranging from theft to criminal mischief and misconduct involving a controlled substance.

Although Ewers says he’s never seen anything this elaborate, he’s not surprised over the lengths Beebe went to in order to evade capture. In the end, it took eight officers to bring him to justice.

“He was pretty motivated. He didn’t want to come to jail.”

Ewers says that in addition to serving the original 21 months, Beebe likely faces an additional penalty for contempt of court.