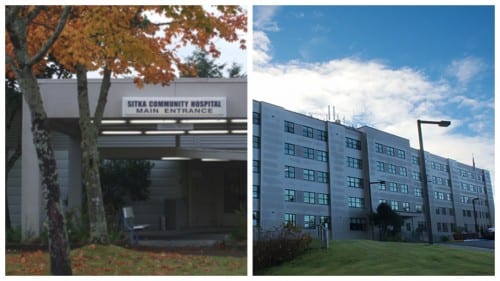 The old question of ‘Can Sitka afford two hospitals?’ became new again, as the Citizens’ Task Force heard a budget report from Sitka Community Hospital yesterday (Monday, 2-1-16). The task force is charged with finding ways to balance Sitka’s revenues and expenses. But in his remarks, hospital CEO — and task force chair — Rob Allen raised the question of how the hospital could work more collaboratively and efficiently with its neighbor across the bridge.

Rob Allen is the chair of the Citzens’ Task Force. But last night, he rose out of it. “This is me with my hospital hat on,” he said and delivered the following news: “This morning we had $4.7 million in the bank. So we’ve had incredible turnaround.”

Last year, the hospital was in the red from a cash flow problem that went undetected for months, in part due to uncollected debts and a faulty medical billing system. And here’s the second bit of good news: Allen says the hospital is in such good financial shape that it has begun to pay back the $1.5 million emergency line of credit owed to the city. “We’ve paid back $100,000 of that so the line of credit is at $1.4 (million),” Allen said. “I don’t think we can pay it off all this fiscal year, but by the end of next fiscal year I’m hoping to have that completely paid off.”

But even though hospital operations are in the black, the city is not off the hook. Allen says the hospital budget includes $160,000 for improvements to the hospital building and clinic, which the city owns and maintains. Allen says the parking lots and sidewalks are in the particular need of repair. “In the past, the way the hospital has worked, they’ve waited for equipment to fail and then replaced it. And we’re trying to be a little bit more proactive in picking projects and prioritizing them.”

The conversation then turned. Allen said that he’s an advocate of the city hospital and of the employees who work there. He stressed that numerous times. But he said that from the moment he took CEO job, he’s been thinking about how to broach a relationship with the Southeast Alaska Regional Health Consortium (SEARHC) and that it’s time to talk frankly about how the two care providers can work together.

“This community does feel needs to have this conversation about the fact that there are two hospitals here. There’s a lot of duplication and there’s a lot of resources that could maybe be spent in more helpful ways,” Allen said.

Allen mentioned that they’re already finding ways to collaborate. Recently, a SEARHC obstetrics specialist came across the bridge to help with a patient emergency recently. Allen brought up another example. “We had a dietician on staff who retired and rather than hire another person, we have a contract with SEARHC to take advantage of their dieticians. They come over to our facility and help us out as needed. We bill them for it. And it’s working great. It’s going to save us $40 – 50,000 potentially.”

Allen recommended the Task Force encourage the Assembly to explore this partnership in the open, in the form of public meetings. “As soon as you start talking about merging, believe me the rumors start flying and people start wondering if they want to look for another job. I think a way to avoid this is to do this in an open and public way.”

Allen suggested an ad-hoc committee with representation from both institutions. This got a lot of head nods from the Task Force. Vice-Chair Maxwell Rule, who ran this part of the meeting in Allen’s stead, was particularly supportive of potential collaboration. “When we talk about opportunities, I think about the demographics of Sitka and Southeast Alaska. We’re all getting older, it’s aging, and I’ve had personal experiences with aging relatives and the lack of long term care facilities,” Rule said. “I look at it as not necessarily as a job loss but offering more services to the community.”

Although they took no action on the matter, the Task Force agreed to consider this recommendation in their final report to the Assembly, due in late March. Rule then passed the gavel back to Allen.

Rule: Thanks Rob.
Allen: You’re welcome.
Rule: You can have your chair hat back.
(Laughs)

The Citizens’ Task Force also voted to move from bi-weekly meetings to weekly meetings. The group meets next on Monday, February 8th at 6 p.m. in the Sealing Cove Business Center.