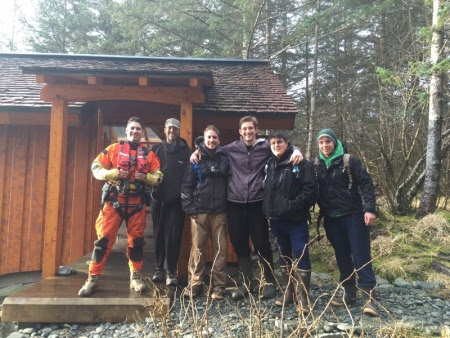 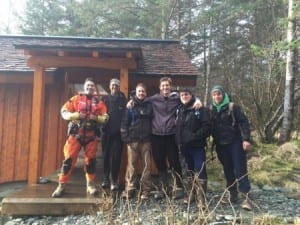 A helicopter from Air Station Sitka rescued six people who had become stranded at White Sulfur Hot Springs, on Chichagof Island, on Tuesday (2-2-16).

Friends of the group — which was from Pelican — notified the Coast Guard that the party had not returned to town after their day trip to White Sulfur on Monday.

A rescue crew from Air Station Sitka located the overdue boaters in the cabin at White Sulfur. They told rescuers that deteriorating weather and engine problems forced them to delay their return to Pelican. Since the group was only equipped for a day trip,  the air crew transported five of the boaters back to Pelican.  The boat’s owner chose to remain at the cabin until the weather improves.  The aircrew provided the owner with additional food and water before departing.

Weather at the time of the rescue was not favorable for boating, with seas of 13-feet and winds gusting to 28 miles per hour. In a news release, Lt. Cmdr. John M. Leach, a pilot at the air station said, “Alaska’s ever-changing weather can quickly turn a day trip into an overnighter. It’s always a good idea to pack extra food.”