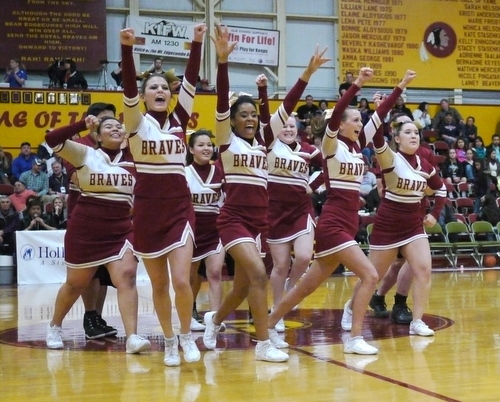 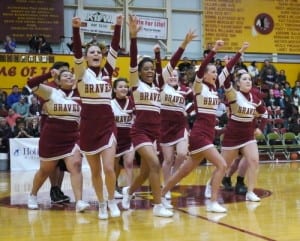 The Mt. Edgecumbe Cheerleaders leave the floor at halftime during the 1A/2A Basketball tournament in 2013. (KCAW Photo/Robert Woolsey)

The Sitka School Board is going on record in support of Mt. Edgecumbe High School — again.

The board on Tuesday night (2-2-16) directed superintendent Mary Wegner to draft a letter in opposition to a proposal from the Alaska Native Science and Engineering Program, to take over the state-run boarding school in Sitka.

ANSEP has offered to run Mt. Edgecumbe as a three-year, accelerated science high school, at a savings to the state of about $5-million.

Board member Cass Pook asked for quick action, even though the discussion was not on the agenda.

“It’s a weeder program. It weeds out kids that are on a path of being successful.”

Pook is on the board of the statewide Alaska Association of School Boards, which has made closing the achievement gap between Native and non-Native students a top priority. She believes Mt. Edgecumbe High School plays an important role in that effort.

“As a pediatrician taking care of adolescents, just developmentally it doesn’t seem appropriate for most adolescents to be rushed through high school in three years. Yeah, that would save the state money, and that’s the only benefit I can see.”

Board member Tom Conley, also a pediatrician, said he thought the ANSEP program was discriminatory against students who weren’t interested in the sciences.

Both member Eric Van Cise and student member Deborah Yearwood spoke about the importance of the relationship between Mt. Edgecumbe and Sitka through sports and vocational programs. But Yearwood had an additional concern.

“Not only is this affecting so many students in the school, it’s affecting staff as well. Another aspect of that is the possibility of most or all of the staff being replaced.”

The school board briefly discussed whether adopting a formal resolution would carry more weight with the legislature, but decided on the quicker alternative of sending a letter.

This is the second time in two years that the Sitka School District has taken a formal position in support of Mt. Edgecumbe High School. Last year the board opposed proposed funding cuts that would have closed the institution permanently.