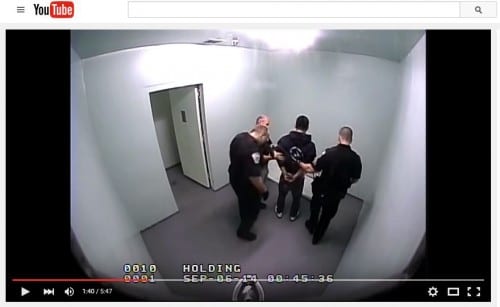 The video of the arrest of 18-year-old Franklin Hoogendorn was at the center of a months-long controversy over Sitka police procedures. (YouTube image capture)

Sitka has settled out of court with a high school student who was tasered in the city’s jail in 2014.

Franklin Hoogendorn will be paid $350,000 by Sitka’s insurance carrier.

Hoogendorn was 18 years old, and attending Mt. Edgecumbe High School, when he was arrested in September of 2014 outside a Sitka bar where he had been attempting to buy a drink.

Police took Hoogendorn into custody. A video of the arrest, which went viral on social media last fall, shows Hoogendorn being forcibly restrained by a jailer and two police officers and repeatedly tasered as his clothes are removed.

The settlement was negotiated between the Alaska National Insurance Company, on behalf of the City of Sitka, and the two legal firms representing Hoogendorn.

“It’s not a windfall for anybody. We felt that it was very fair.”

Hoogendorn never filed a lawsuit over the incident. His attorneys instead submitted a “draft complaint” which contained only the threat of a lawsuit.

As a result, Koutchak says the settlement agreement does not bind Sitka, for example, to change police procedures, or other any action that might be compelled by a judge, had the matter gone to court.

Franklin Hoogendorn is now 20 years old. His attorneys could not be reached for comment by press time.

The conduct of the officers in the incident remains under investigation by the FBI.

Additional reporting from KCAW on this story:

FBI to lead investigation of tasing incident in Sitka jail

In letter to FBI, STA concerned about racial bias