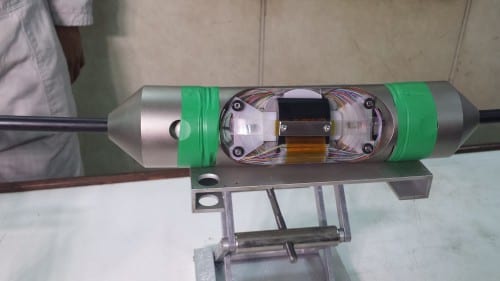 The fiber optic cable serving Sitka and Angoon was repaired by GCI today (02-19-16), after six days of work. (Photo by Bruce Rein)

Full internet service to Sitka and Angoon has been restored.

GCI wrapped up repairs Friday (2-19-16) on the undersea fiber optic cable connecting the two communities. Internet, television, and wireless data services are fully restored, according to a company news release.

The service outage was first reported on Sunday, February 7, around 6 PM. An investigation revealed damage to the fiber optic cable about seven miles west of Angoon in Chatham Strait, at a depth of approximately 1,200 feet. During the repair effort, a second area of damaged cable was discovered in Salisbury Sound north of Sitka, near Kakul Narrows. 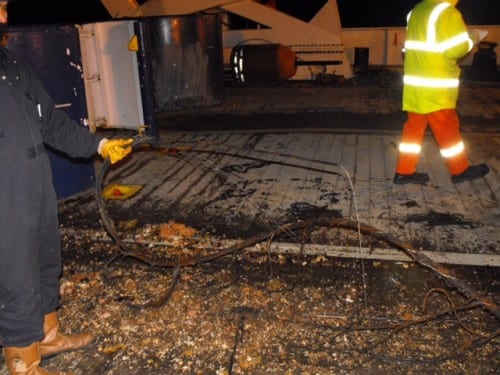 The combination of rugged seafloor terrain and strong tidal currents is believed to have eroded the double armor protection of a section of the cable, and severed some of the fibers that carry communication traffic. (Photo by Bruce Rein)

The combination of rugged seafloor terrain and strong tidal currents is believed to have eroded the double armor protection of a section of the cable, and severed some of the fibers that carry communication traffic. 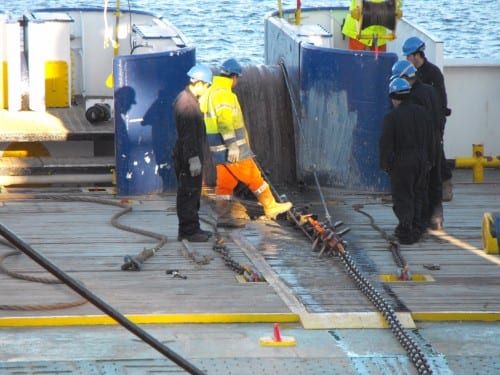 The crew of the Wave Venture retrieve the double-armored cable from the sea floor. (Photo by Bruce Rein)

GCI deployed a stand-by repair ship from Victoria, B.C., staffed with a crew of 48, to Chatham Strait to locate the cable and repair it. In the meantime, communication traffic was moved to other fibers in the cable.

The repair ship arrived late Saturday. By 2 AM the crew had deployed a remotely operated vehicle (ROV) that dove 1,200 feet to the ocean floor and started the challenging and days-long repair process that included cutting the damaged cable, installing a splice structure, and testing the fiber.

The fiber optic cable network was installed in 2008. It is part of a 754-mile system serving Southeast Alaska. This system connects to a much more extensive system connecting all of Alaska to the lower 48 states. 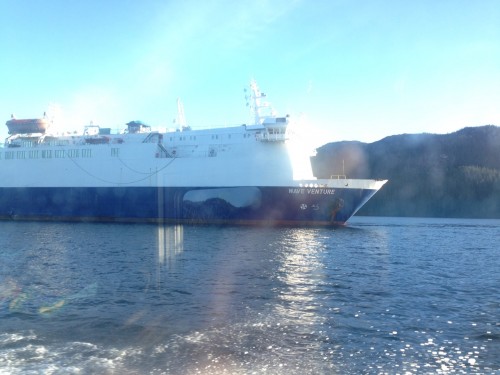