For the next few months carvers will be working at Sitka National Historical Park — but not on one of the park’s famous totem poles. As part of the National park Service’s centennial, the Sealaska Heritage Institute has commissioned a traditional canoe. The sponsors hope the project allows visitors to look into the past, while the carvers perpetuate this craft into the future.

Carving a canoe takes lots of trial and error. It’s kind of like a metaphor for life.

Just ask master carver Steve Brown. He says he learned how to do it through lots of mistakes.

“A person could think up other ways to do it but we found over the years generally speaking the old timers had it figured out and they did it their way for a number of reasons and you don’t necessarily know what all those reasons are until you do it that way,” he said. “We can think up other techniques to make that work but they won’t be as efficient in the big picture as in the old, traditional way.”

He’s teaching his apprentices Tommy Joseph, Jerrod and Nick Galanin, all of Sitka, and T.J. Young of Hydaburg, how to add by taking away. This some 5,000 pound, 28-foot red-cedar log is being transformed into a boat, one wood chip at a time. 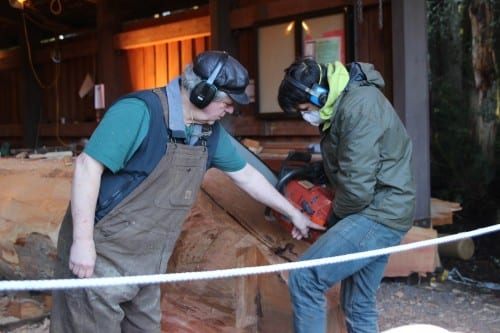 Steve Brown shows Jerrod Galanin where to cut the log with a chainsaw. (Brielle Schaeffer/KCAW photo)

But there’s more to it than carving. The artists also use a technique called steaming, once the bottom of the boat is carved and the inside is hollowed out.

That method will be able to stretch the wood more than a foot. Galanin says he wanted to learn how to make this type of canoe because it is so special to the region.

“Tlingit people, Haida people are tied to the land and this is our technique, our methods,” he said. “We utilize what’s around us and this is our style of boat, you can’t go anywhere else in Alaska and build this kind of boat.”

Apprentice Young says he wants to learn the craft because it’s so important to his culture.

“Sometimes you have to stop and look back in order to move forward,” he said.

Brown has been carving canoes for decades, something he started learning on the Makah Indian Reservation in Washington state. He says he often gets asked how a non-Native learned the art of canoe carving. To answer that question, he likes to tell a story about working with his Makah teacher. 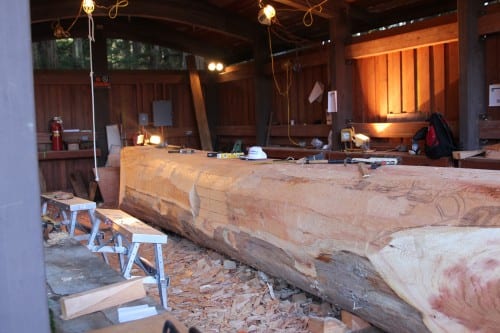 “He said some of the people in his community had asked him how come he decided to work with a white man. He said, ‘It’s true historically white people were largely responsible for the unraveling of our culture. And therefor it’s right for some of them to put it back together.’ I’m attempting to help put it back together,” Brown said.

He’s learning from the process, too.

Sealaska Heritage Institute donated the red-cedar log from Prince of Wales Island. It was the best tree for the job, Brown says, but it got a big crack when it fell to the ground. The carvers have to cut out the split part in the center and add new wood.

“A person can get spoiled working on really nice trees so it’s good to know how to deal with one that isn’t so perfect,” he said.

The crack will add time to the process but the carvers hope to be done in May.

Visitors can stop by the outdoor workshop at Sitka National Historical Park to see the canoe in progress and talk to the carvers. They are at work daily between 9 a.m. and 3 p.m.