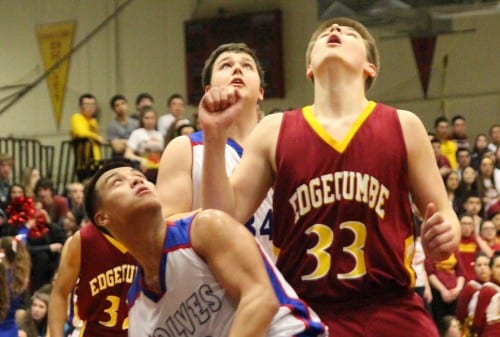 Despite coming up short in the score, the MEHS Braves dominated the offensive boards in the championship game. (KCAW photo/Robert Woolsey)

The Sitka High Wolves won their second Region V Basketball title in as many years.

And the Mt. Edgecumbe Lady Braves won the 3A Region V crown for girls.

Sitka and Mt. Edgecumbe are the only 3A teams left in Region V since Petersburg dropped into 2A last year. The two wins at this weekends regional tournament gave Sitka a 5-1 edge over the Braves for the season.

“To win a game against a team that well-coached, that plays that hard, on their home court — credit to them for making us play to our best, credit to us to for rising to the occasion. There were two good teams out there. No losers.”

Lee says his team evolved over the course of the season. Along with gaining improved skills, the team also bonded and learned their roles.

Lee says every Sitka player now represents some kind of threat to opponents.

“Everyone I put on the floor is capable of having a big night. Jesse (Lanteen) had 29 in the last regular-season game, injured tonight. We were light on Tevan (Bayne). Last night it was Marjo (Vidad), Coleman, Bradon (Casey). The guys off the bench: Oliver Baker Moore, Andrew Rule, Messiah Vidad — those guys come in and give us something. It’s not always scoring; they just give us great minutes.”

Lead scores for the Braves were Bobby Pate and Paul Bioff with 20 and 19 points respectively.

Sitka now has to start thinking outside the region. Lee believes the Wolves will hold their own at state.

“Everybody points at Barrow. Clearly they’re a cut above the rest because of the quality of their players. I would say we’ve given them their two best games in the last two years at 3A. But we’re not looking ahead. We’re going to wait for selection Sunday, and prepare. And try to be the best we can be regardless of the opponent, and hope for a high seed. We’re hoping for a top-4 seed. We’ve earned it. Last year we were regional champs and we were 8 seed. We’re hoping for 3 or 4 this year.”

The Mt. Edgecumbe Lady Braves turned around their losing record against Sitka, to take the 3A Region V girls basketball title.

The Lady Wolves beat Mt. Edgecumbe on Thursday, in the opening game of the Region V tournament, making it 5 straight wins over the Lady Braves this season.

But Mt. Edgecumbe could not have picked a better time to come into their own. They beat the Lady Wolves Friday night by 2 points to force a playoff, and then won again Saturday night, 48-37, to seal the deal.

Senior Payton Weisz, from Tok, led all scoring with 17 points for the Lady Braves. Julie Amaktoolik put up 11.

The state tournament begins in March 24 in the Sullivan Arena in Anchorage.