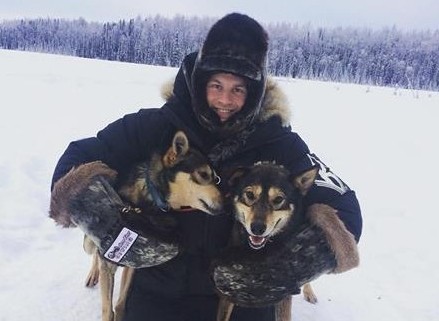 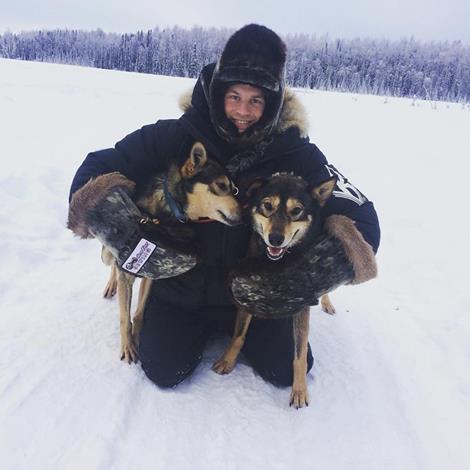 Dallas Seavey in his Sea Fur Sewing hat and mittens with his sled dogs. (Photo courtesy of Dallas Seavey.)

When 2016 champ Dallas Seavey crossed the finish line of the Iditarod last night (3-14-16) he had a little bit of Sitka with him.

Robert Miller had an extra incentive to keep track of the Iditarod this year. Not only does he enjoy keeping tabs on the sport, but one of the race’s frontrunners was wearing his sea otter and seal fur creations.

“I was watching KTVA of the finish coming in,” he said. “I just wanted to see if I could get a glimpse of my products on TV and for me that was pretty cool, pretty special.” 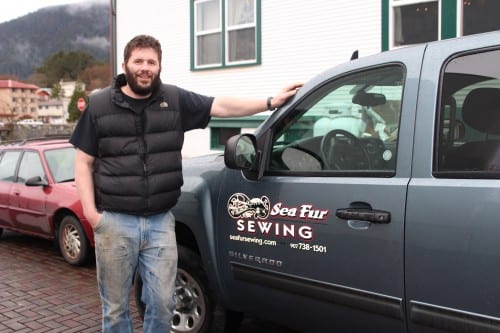 Miller is the man behind Sea Fur Sewing. Seavey was wearing a hat and pair of mittens that Miller made for him as he pulled under the burled arch in Nome. The now four-time champ’s hat was specially made with a brim and long straps that secure with Velcro. It’s completely lined with sea otter fur.

What makes these furs so good?

Well, seal fur is waterproof and completely wind proof, Miller says. Sea otter fur has up to one million hairs per inch.

Mushers Lance Mackey, Dee Dee Jonrowe and Becca Moore are also sporting Miller’s wares in the race this year– mostly gloves and custom hats. He’s named a few of the hat styles after the mushers who wear them, starting with Ramey Smyth who began sporting Sea Fur Sewing products a few years ago. Miller says the Lance Mackey style is his biggest seller.

“We make other things too,” he said. “We make blankets and hats and pillows and scarves and vests and coats and all kinds of stuff and when I say ‘we’ I mean myself.”

Miller is completely self-made, getting the idea for his business after a hunting trip. Miller is Tlingit, which allows him to hunt seals and sea otters.

“I started sewing about four years ago never had no teachers or anything just went out hunting one day, got some otters and realized I needed to do something with them and hand stitched a few items together enough to sell to a local store here and they liked the product and went and bought a machine with that money,” he said.

He still hunts the furs but now he also pays Alaska native hunters in Prince of Wales Island, Kake, Angoon and Cordova, he says. He sews everything by hand in his garage and sells them online via his business website and an Etsy shop. He says he’s sent his product to all 50 states.

“It’s kind of funny I sell most of my stuff in the Midwest, Michigan and that area,” Miller said.

He also sells goods in town by appointment only, he says.

“My shop is in my garage and generally when I have customers coming over I like to spiffy it up a little bit because usually the fur is a flying and it’s pretty rough in there,” he said.

While Miller continues to fill orders this week he’ll also be watching for the other mushers in Sea Fur Sewing gear as they pull into Nome.