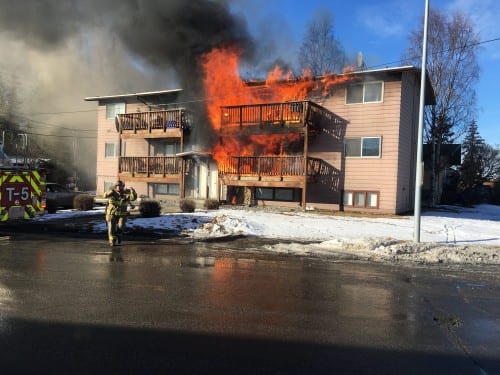 Quick thinking by the Sitka boys basketball team averted tragedy this morning (Wed 3-23-16), when a six-plex in the Anchorage neighborhood where they were staying caught fire.

The boys and their coach woke and rescued 11 occupants before firefighters arrived.

The state 3A basketball tournament opens Thursday (3-24-16) at the Sullivan Arena in Anchorage. The Wolves open at 9 PM against Grace Christian.

The Wolves were on their way to breakfast in their team van at 11 AM in the Spenard area of Anchorage when coach Andy Lee says the boys noticed flames coming from an apartment building. 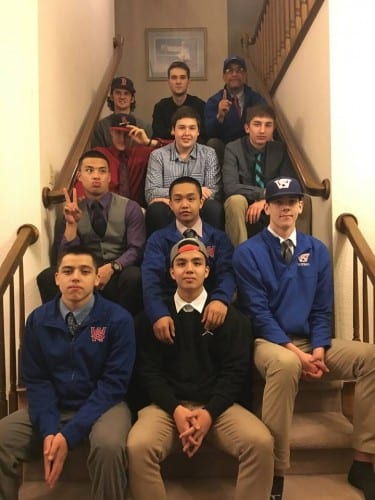 No matter how well they do at state, the Sitka Wolves basketball team will return home as winners. (Andy Lee photo)

The Sitka basketball team was the first on scene. Lee says he saw a passerby taking pictures, but it occurred to him that something was not right.

“And I realized that no one was out of the apartment. So I dispersed the guys to the perimeter to look for exterior doors and windows, because it was too involved for me to put them at risk.”

While the team alerted occupants from the outside of the building, Lee himself went in the entryway and pounded on all the doors of the six-plex. The residents — most of whom had been asleep — started coming out and were helped across the street by the basketball players.

“We were a little bit afraid that there were propane tanks on the deck. So we wanted to get away from the building as quickly as we could.”

Lee says they were functioning on adrenaline, because there were a lot of people to get out, and the fire was growing quickly.

“One lady, after we got 10 out, said her baby was still inside. And by that time it was more than fully engulfed. And in that moment of panic, as we were trying to decide what to do, a 14-year-old girl came running out through the only exit point in the building — and she was the baby. And so everybody got out safe.”

Lee says there was a wide age-gap in the occupants of the building — under 15 and over 60 — and that the working residents were most likely away at when the fire started mid-morning.

After breakfast, the team returned to the burned six-plex to check on the families they had rescued.

“The elder woman in the home — the grandmother — and the matriarch of the Samoan families that were there kinda hugged us up, took a picture, and thanked us profusely. She said they were just able to get back in and retrieve a few possessions, and the fire department was doing the mop up.”

Lee is extremely proud of the conduct of his players during the emergency. He says there was no time to organize; they just found their stride waking up the residents and moving them outside.

He has little doubt that this would have been a different story if the Sitka players had not passed by when they did.

“It had the potential to be a great tragedy because they were asleep, they were elderly, and there was only one exit point for all six apartments. And that’s where the fire was.”

Lee says his team is feeling good about their actions during the fire. He’s not sure how that will translate to the basketball court during the state tournament this weekend. “We’re feeling good about ourselves,” he says, “but we take nothing for granted. We are humbled to have been there.”