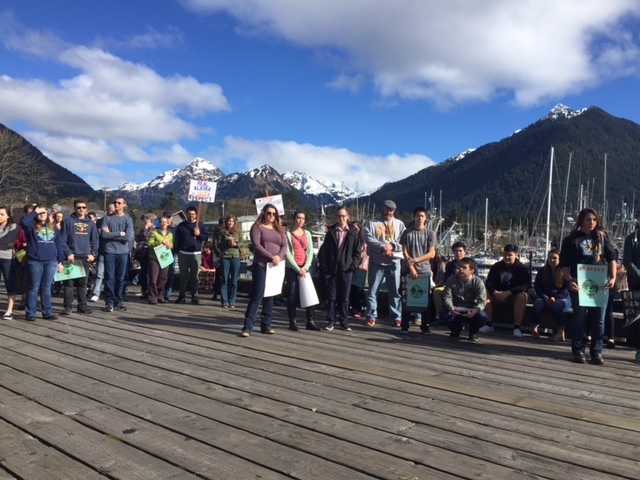 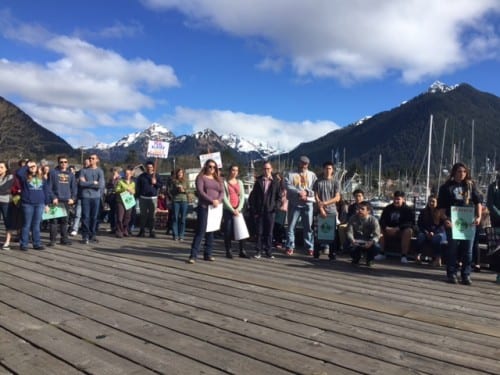 High school students and community members rallied at a local “Choose Respect” march through downtown Sitka on Thursday (3-24-16). The goal of this march, and others held across the state, was to bring awareness to Alaska’s high rates of sexual assault and domestic violence. But the message of the march had a subtle twist for Sitka and Mt. Edgecumbe high school students, who want to promote respect on and off the basketball court.

Nearly half the women in Sitka have experienced sexual assault or domestic violence in their lifetimes. That statistic is startling.

In fact, for Caitlin Lavorgna, a Jesuit Volunteer with Sitkans Against Family Violence, it’s a shock she hasn’t been a victim.

“It’s so frequent, and luckily making it through my college years I was not sexually assaulted. I’m one of the lucky ones I guess.”

Samantha Craig hasn’t been so lucky. The Mt Edgecumbe junior has seen her relatives get abused.

“I actually watched family members,” she said. “I was witness to domestic violence and it wasn’t anything to watch. It wasn’t anything beautiful, which is why I wanted to go to this parade.”

Samantha was one of dozens of people who took to Lincoln Street with signs that read “I feel on top of the world when I respect myself” and “Stop Harassment, Stop Intimidation” as part of Sitka’s “Choose Respect” march. Communities across the state held similar rallies as part of an initiative former Gov. Sean Parnell started.

“There are a lot of people in our community who feel the effect of domestic violence and sexual assault I think it’s important we all recognize it’s a problem in our community and we’re doing something to combat that,” he said.

Sitkans Against Family Violence runs several programs to help prevent domestic violence by promoting healthy relationships at a young age. One of those programs is the Sitka Youth Leadership Ccommittee. The group focuses on the relationship between the two rival high schools, which hasn’t always been positive. Sitka High School student Debbie Yearwood is a member of the committee.

“A lot of the times what we’ve seen is when we’re in the stands — people from our community or from our schools just throwing slurs and being disrespectful and making people feel cold and unappreciated,” she said.

For these students, respect is not something reserved for the future. It begins here, in the way they interact among themselves. During the Region V basketball tournament, the committee ran a selfie contest to get Sitka High kids to take photos with Mt. Edgecumbe students. Winners got slushies.

“Like, rivalry is great but healthy rivalry is what we’re striving for,” Yearwood said.

And that respect can spill over to other relationships and to the community at large, she added.

But it will take time for this conditioning to turn around the Alaska’s alarming statistics. In the meantime, the effort to advance the message of respect continues, at events like these all over the state. SAFV volunteer Lavorgna says the Choose Respect parade is a good way to help end the epidemic of sexual assault and domestic violence in Alaska.

“It’s horrible,” Lavorgna said. “I just think things like this will raise awareness and decrease the numbers.”