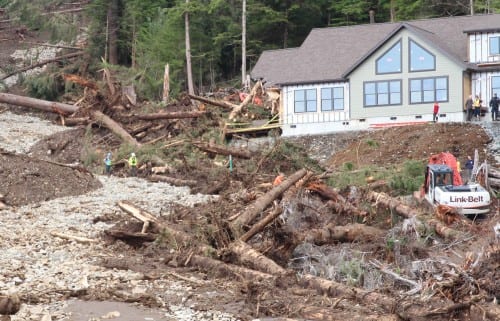 The August 18, 2015 landslide damaged properties being built by Sound Development LLC, on land they purchased from the city in 2013. (KCAW photo, Robert Woolsey)

The August 18th landslide in Sitka was unprecedented, claiming the lives of three men and raising safety concerns about the Benchlands, a strip of land nestled between the mountains and the ocean. The city sold four parcels, totaling 20 acres, to Sound Development LLC in 2013 and construction was in progress when the landslide hit, damaging one home and completely destroying another.

Now, a lawsuit by one of those homeowners is raising legal questions about who is responsible: the city or the developer?

On the morning of Aug. 18, 2015 heavy rains generated a thousand-foot landslide through Sitka’s Kramer Avenue neighborhood, sweeping away the home of Christine McGraw.

On Dec. 4, 2015, McGraw filed a complaint against Sound Development, LLC, from whom she had purchased the lot. The Sitka-based developer is now demanding the City of Sitka come to its defense, compensate Sound for its losses, and ultimately, hold the business harmless for what happened.

None of the attorneys involved in this case would comment or return KCAW’s calls by press time, but we do have a paper trail of their letters.

In a letter dated March 22, 2016, the lawyers representing Sound Development, Kim Stephens and Michael Lessmeier, wrote to David Bruce, hired to represent Sitka in the wake of the landslide.

The letter reads, “Neither the city to our knowledge nor Sound anticipated the landslide, but if Sound has any liability for the landslide, the City is the genesis of that liability.”

The letter also quotes the 2012 Request for Proposals — or RFP — put out by the city, which described the South Benchlands as “prime development land” for residential housing.

Attorneys Stephens and Lessmeier go on to say that, “In order to induce Sound to purchase the RFP land, the City led Sound to believe that the RFP land was suitable for development” and that “the City has an ethical and moral responsibility to protect its residents when calamity strikes.”

In his response letter, Bruce refused to commit the City of Sitka to the defense of Sound Development and challenged their characterization of events. Dated March 29, 2016, Bruce wrote, “The City and Borough of Sitka rejects as baseless your implication that CBS ‘induced’ your client to purchase property under some false pretense, or that the CBS is the ‘genesis’ of any liability your client may have.”

Prior to the landslide, the city had not performed a geotechnical survey on Sitka lands. In response, the city hired Shannon & Wilson in November to perform a survey on the mountainside between Jacobs Circle and Emmons Street. Their subsequent report revealed that all zones were at risk for landslides to varying degrees.

Our story stated that no geotechnical survey had been performed in that area. That is incorrect.

In 2007, the city hired the Anchorage branch of Golder Associates Inc. to perform a geotechnical survey on the Whitcomb Heights Subdivision. Their report (available here) focuses primarily on the facets of subdivision construction, such as roads and water tank siting. While the report does not assess landslide risk, it does examine the subsurface conditions of 20 test pits – noting which had ancient landslide and volcanic ash deposits – and evaluates the bearing capacity of the soil.