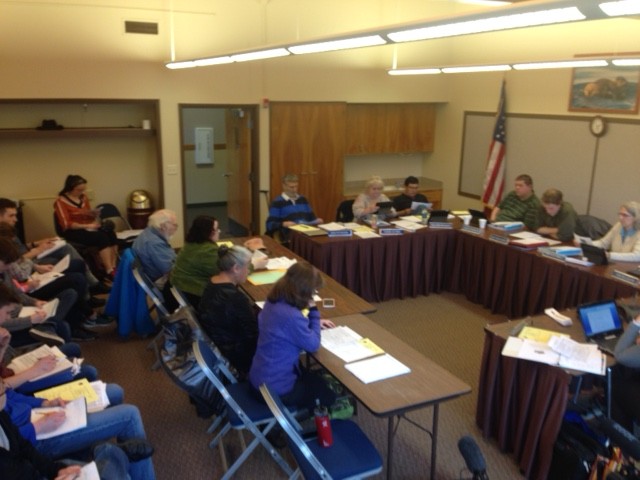 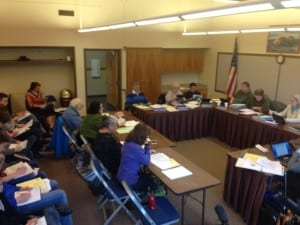 The Sitka School Board and the assembly are not far apart on the question of how much support the city will provide the district next year.

The bigger question is: What will happen if some of the school district’s worst budget fears come to pass before the legislature adjourns in Juneau.

Under a budget scenario presented to the assembly in a joint meeting Thursday (4-7-16), the school board is showing a deficit of about $1-million next year. But it’s got over $2-million in savings.

“I guess my question is then: What is the school board asking of us? To me it seems as if the money is available. You have the money either way. What are you guys asking of us?”

The two darkest clouds hanging over the district’s finances are legislative. The Sitka School Board is counting on House Bill 198, a $50 increase in the base student allocation, and hoping Senate Bill 207 goes away. SB 207 is the bill that would shift responsibility for teacher pensions away from state government and back to local districts. Between them, it would throw the district another $700,000 into the red next year.

That would be a problem, said superintendent Mary Wegner.

“If we get some of these other things happening, we could be in significant issues.”

On the plus side for the district: There doesn’t look to be much of a fight shaping up over whether the assembly will contribute the same amount of money to schools next year as it did this year — about $6.2-million. That figure includes a last-minute contribution of $1-million to make ends meet last year.
The Citizens’ Task Force has recommended shaving $200,000 from the city’s school spending — but that’s all. The assembly doesn’t seem likely to roll back the entire million.
Again, Steven Eisenbeisz

The assembly will be making some tough decisions of its own in the very near future about the city budget — which could be as much as $4-million in deficit next year. Still, assembly member Ben Miyasato wanted to shore up schools as much as possible, for the sake of the community.

“I myself believe that if you put too many cuts in there, people will vote with their feet. They will find other communities that take education more seriously.”

Superintendent Mary Wegner reminded the assembly that the school board was in favor of a possible property tax increase to stabilize both the school district’s and city’s finances. The Citizens’ Task Force will propose their tax package — the so-called “Grand Bargain” — to the assembly next week.

Member Matt Hunter asked the school board to help sell the deal to Sitka voters.

“I think all of us together are going to have to go on a public relations campaign looking at whatever the assembly ultimately puts on the ballot for a property tax increase. If we do that, we need everybody in this room who cares, to get out and explain why.”

The assembly will meet in a work session with the Citizens’s Task Force 5 PM Tuesday, April 12 in room 229 of the University of Alaska Southeast. The Sitka School Board will hold a second budget hearing 7 PM Wednesday April 13 in the Sitka High School Library.