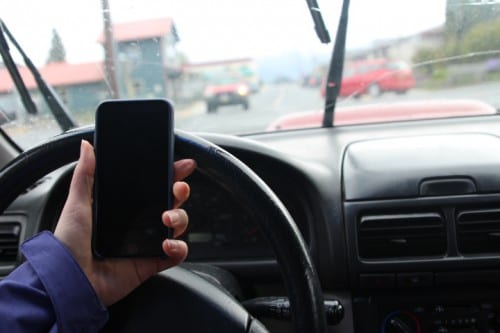 Tuesday night (4-26-16), the Sitka Assembly passed a law that would fine those using their phone while driving. Exceptions are made for hands-free use. (Photo courtesy of Her Campus Media)

Alaska banned texting while driving in 2008. The maximum penalty for a first time offense is $10,000, the highest in the country. And in Sitka, the Assembly cracked down on the issue even further. Tuesday night (4-26-16), the group passed a law that would fine those caught with a phone in their hand while driving. The policy intends to reduce distracted driving, but it’s rules are of deep concern to some local taxi drivers.

Anyone caught holding a phone while talking, text messaging, browsing the internet, playing a game, listening to music, or using GPS technology will be fined. And these rules apply even when the vehicle is stopped at a sign or a traffic light. Drivers can, however, legally use a phone hands-free – with voice or Bluetooth technology.

Can you answer the phone and drive a car at the same time?

Siggurd Rutter says yes. He manages 738-Taxi, a small cab company in Sitka. “I may be getting a phone call in the middle of this testimony just to show you that I can answer the phone without taking my eyes off the road,” he said while addressing the Assembly during public testimony.

The ordinance to regulate cell phone use in vehicles originally exempted commercial drivers like Rutter – those who operate cabs, delivery trucks, emergency response vehicles, and other commercial drivers – from this law entirely.

But at their last meeting (4-12-16), the Assembly voted to remove that exemption, making Sitka’s cell phone laws stricter than the state of Alaska’s.

Rutter pointed out that the state’s anti-texting ban pardons commercial drivers and allows for flip phones. “These old style phones have features that allow them to be operated. I can feel the raised buttons. I can re-dial my dispatcher,” Rutter said. “These are kind of the Helen Keller model as opposed to the featureless smart phones that require so much attention to answer.”

At one point, Rutter’s got a call. And with the flick of a wrist, Star Trek communicator style, he flipped open his black mobile. Does that maneuver compromise your driving ability?

You may not think so, but Doug Osborne, chair of the Health and Human Services Commission, cites data saying otherwise. Addressing the Assembly, he said, “Multi-tasking is a myth because the brain cannot do two things at once. It just bounces back and forth between the two tasks. That isn’t an opinion. That’s research. And I stand by every single thing I’ve shared in those last six months in terms of where those numbers have come from.”

One number? Cell phones were responsible for 1.6 million crashes in 2008. That’s according to the National Safety Council.

With a clipboard in hand and figures like these at the tip of his tongue, Osborne has been marshaling support for this ordinance for over a year. And in that year, over two dozen Sitkans were treated at Sitka Community Hospital, where Osborne works, for accident-related injuries.

Enforcement, however, is difficult. Assembly member Aaron Swanson asked Sitka Police Chief Sheldon Schmitt how many people were pulled over for texting while driving. Schmitt said it’s rare and that, “Generally speaking, texting while driving is an add-on after an accident happened.”

Swanson also wondered whether police would have a right to examine a phone for evidence of use. Schmitt felt that wouldn’t come to pass and because the violation is a primary offense, citations would be issued at the discretion of police officers. “Cop stops them and says, ‘It appeared you would be talking on your phone.’ And if they say no, I think they’ll just write them a ticket. That’s what I would do,” Schmitt said.

While the ordinance does not specify what the fines will be, Schmitt anticipated it would fall within the neighborhood of $25.

Mayor Mim McConnell said her office got a lot of e-mails in support of the policy and that swayed both her vote and her habits. “Even though I have tried in the past to not answer the phone when I’m driving, there’s times when I have. But I want to make sure that I’m doing it right all the time. So I’m going to be using a speakerphone device that uses Bluetooth. Whether or not this passes, I’m going to change my behavior,” said McConnell.

Pass it did, on third and final reading by a vote of 5-2, with Aaron Swanson and Steven Eisenbeisz voting against. The new policy will go into effect in 30 days. During first reading, the Assembly directed the Sitka Police Department to allow those fined to donate their payments to Sitka’s EMS services.