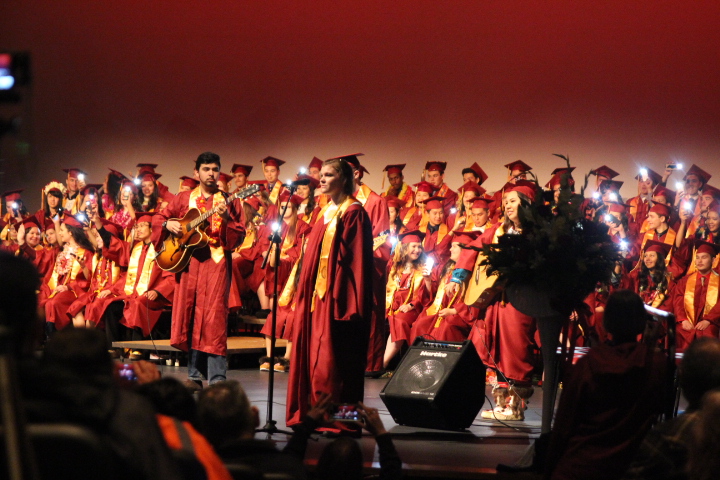 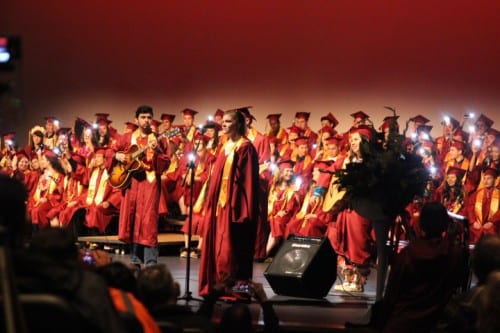 It’s been a rough couple years for Mt. Edgecumbe High School. The state-run boarding school had to fight off a proposed closure due to budget cuts and a controversial takeover by the Alaska Native Science and Engineering Program. 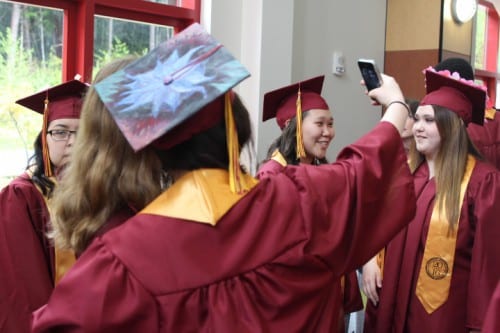 But at graduation, you would have never known the school had gone through any rough patches.

Clad in cardinal and gold robes, the outgoing seniors stood strongly in front of their families and teachers, ready to take on the world. 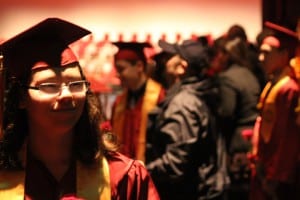 A graduate in the auditorium. (Brielle Schaeffer/KCAW photo)

She says she looked to AOL for some advice on her speech and found a list of ten things the website said to never say.

“And one of them is, ‘We are the future leaders,’ and I thought, ‘Why not use that?’ And I read the description and it said, ‘Well, it’s overused it’s cliche and probably not true because some of you won’t be leaders.’ But you know what I say to AOL, they haven’t met my class,” she said.

Student representative speakers Devon Deaton and Rachel Teter, both of Fairbanks, reminisced about all their years at Edgecumbe. The political controversy didn’t even make their list. 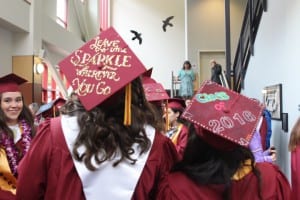 Adulthood may be scary but retiring superintendent Hutton says he has faith the students will get through it.

“Because of who you are and what you stand for and what you learned of your time here at Mt. Edgecumbe I absolutely know our world will be a better place as you move through it,” he said.

Hutton also looked to his own student’s admissions applications to pluck out some gems, a sort of verbal time capsule. The majority of Mt. Edgecumbe students are Alaskan Native and come from more than 100 communities, some from small villages.

“Another general category of reasons of why students come to Mt. Edgecumbe is because they want to escape influences at home,” he said. “One student said the reason I want to go to Mt. Edgecumbe is I wish to live a drug free life. Living in a small enclosed village is hard if you want to live drug-free.”

Perhaps most poignant, though, are the essays parents have to write for their children to get into the high school. Hutton says he always had a hard time reconciling the fact that the boarding school took students away from their traditional ways of life. But, Hutton says, one essay made him think differently about it.

“’We started to raise our grandson in a bi-cultural environment’,” he said, reading a parent essay. “Subsistence instills patience, respect for the resources, the land and the sea. The boarding home era is very much a great process of instilling some principles and values like subsistence.’ So to me, it’s a connection, a tie, a dependency about what happens at home and what we all stand for at Mt. Edgecumbe.”

Hutton is retiring in June, for the second time, after having come out of retirement to serve as school superintendent again. Janelle Vanasse of Bethel will take his spot.

He ended his speech, and tenure at the school, with a chant.

And nothing is stronger than that.