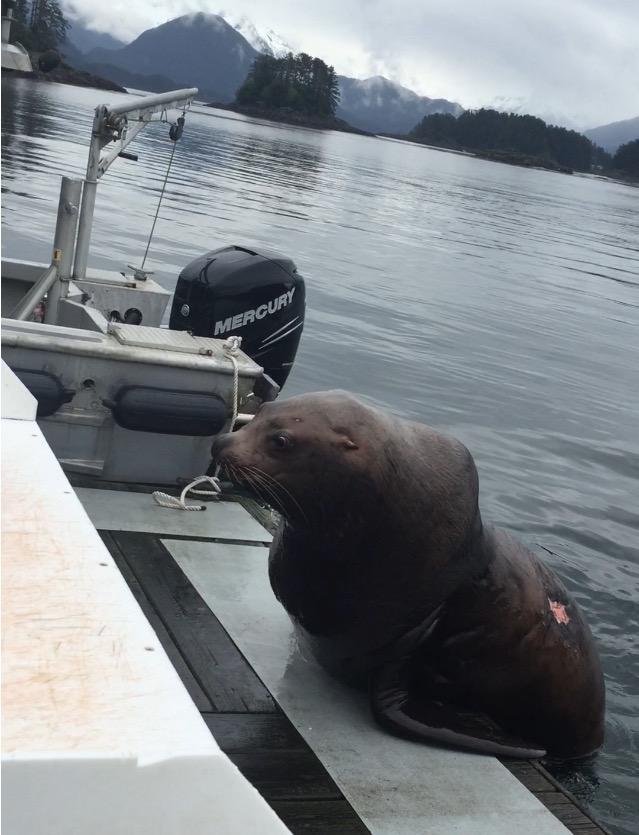 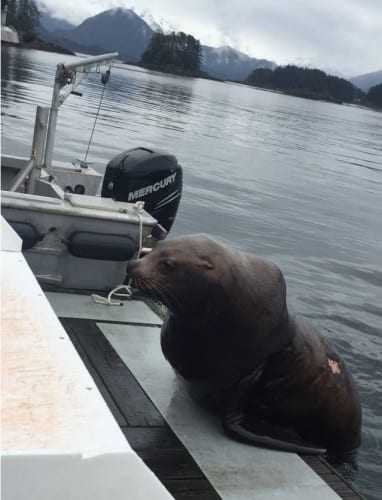 The sea lion in question has a distinguishing scar on the left side of his back. (Photo by Stan Eliason)

A 2,500-pound terrorist has been surprising sport and commercial fishermen outside Sitka harbors. There’s one thing he’s after—fish — and the season is just ramping up. This federally-protected mammal is causing more trouble than his weight for the city.

A Steller sea lion has been frequenting the Sealing Cove fish cleaning station for more than a month now. When anglers cruise into the floating dock to fillet their catch, the animal beelines toward them for what he hopes is an easy meal.

Police Lt. Lance Ewers had his own run-in with the sea lion, after a day out on the water with his kids. He says he saw his friend cleaning fish by the runway on his way back into Sealing Cove and asked what was up. The sea lion had chased Ewer’s friend away from the cleaning station. So, like any good detective, Ewers had to find out what was going on. He drove over to the dock and left his kids on the boat.

“All of a sudden the sea lion jumps up out of the water on to the fish cleaning station on the dock,” he said. “And you would be surprised how agile they are even out of water. It doesn’t hop around you see on national geographic the walruses – don’t be fooled by the sea lion they get around just fine.”

The sea lion didn’t see any fish, so it hopped back into the water, but not before sizing him up.

“It did not fear me there was no fear whatsoever it knew it was a sea lion and I was a human and I was in its neck of the woods,” he said.

And NOAA law enforcement says that is the problem. The animal is accustomed to humans and has come to associate the cleaning station with food.

Al Duncan is the assistant special agent in charge with NOAA Fisheries Office of Law Enforcement in Sitka.

“It’s really a learned behavior on the sea lion’s part in particular because some of the reports we have received is people are actually taking fish carcasses and feeding the sea lions,” he said.

Duncan says NOAA talked to the city about possibly moving the fish cleaning station until the sea lion dissociates it with food but that could cause further problems. Fish waste near the runway attracts birds, which causes safety hazards for airplanes. And cleaning fish inside the harbors is prohibited.

“We posted some signs: Do not feed,” he said. “We posted some additional signs making the public aware that there’s an aggressive sea lion that seems to be running about this location so that they’re aware of it and they can use extreme caution when using this facility.”

And really that’s the best they can do. The sea lion is federally protected under the Marine Mammal Protection Act. That means the city and state have to stay hands off. Wildlife Trooper Tim Hall said if a bear was showing the same aggressive behavior the state would consider destroying it.

Stan Eliason, the city’s harbormaster, says he can’t even haze the sea lion away from the station without proper permits.

“It seems like they’ve got more protection than we do but it’s just how it goes,” he said.

He says he’s working with NOAA’s protected resources division out of Juneau to figure out the best course of action with the sea lion.

“They’ve recommended putting scarecrows out there I don’t think that’s going to work he’s too comfortable with humans,” Eliason said.

Sitka and Southeast have had problems with the massive marine mammals before. In 2014, a sea lion lunged out of the water and bit a commercial fisherman on his backside. A similar thing happened in Petersburg, too.

Eliason says the sea lion’s behavior is the worst he’s ever seen. And the animal has now been reported in each of the city’s five harbors. He’s worried about the safety of harbor users, especially children. In one recent instance, this sea lion jumped aboard a man’s boat, startling him to the point he fell over and caught his hand in a hook.

There is one option to get rid of the sea lion without federal intervention – subsistence harvest. Alaska Natives living on the coast are allowed to hunt the animals.

“It’d be a win-win situation for me again so I don’t have to worry about the sea lion charging adults and children and pets,” he said.

But until if and when that happens, Eliason says: “Don’t feed the darn thing.”

It is illegal to feed or attempt to feed sea lions in the wild. NOAA fisheries law enforcement will issue citations to those violating the law.