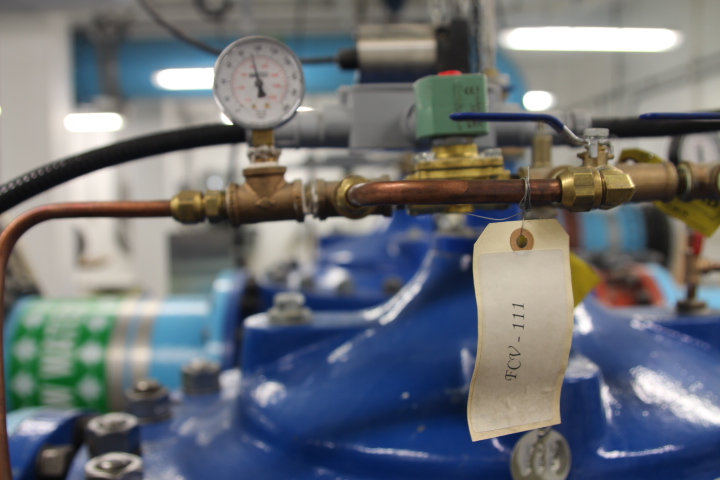 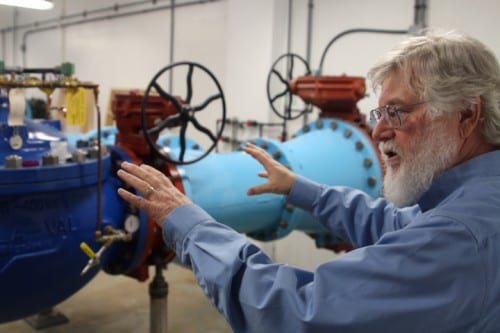 Project engineer Stephen Weatherman explains how all of Sitka’s water is run through the 24-inch pipes in the plant. (KCAW photo/Robert Woolsey)

Some of the best drinking water anywhere may be just a little bit better now.

Sitka officials on Thursday (5-19-16) cut the ribbon on a new, $8-million dollar ultraviolet disinfection plant for the town’s water supply. 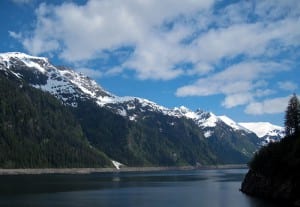 The great thing about Sitka’s water is how easy it is to trace. It literally falls from the sky into Blue Lake and the surrounding watershed, and maybe just a few days later flows out our taps.

But for the US Environmental Protection Agency that is not enough. Thanks to the Enhanced Surface Water Treatment Rule, Sitka’s water now takes a detour through an innocuous gray building with a blue metal roof at the Sawmill Cove Industrial Park.

Stephen Weatherman: This is the generator room…

On the ground floor of the UV Disinfection Facility are offices and storage rooms for chlorine and fluoride. Not much to write home about.

But down in the basement it’s a plumber’s paradise.

Member of the public: Oh my…

Oh my. City engineer Stephen Weatherman leads a small group of residents into a room of massive blue pipes — each 24-inches in diameter — and steers us toward three silver-colored ultraviolet reactors. 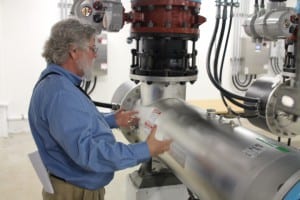 “This is where the action takes place…”. Weatherman points out the three UV reactors in the plant. (KCAW photo/Robert Woolsey).

“This is where all the action takes place. There are tubes in here, nine of them, just like a fluorescent light except they put out ultraviolet — which is really dangerous. It’s why it’s all enclosed. We have special masks upstairs people have to wear if they come in here and they’re on. But it’s no different than the ultraviolet you get from the sun. It’s just more intense.”

The ultraviolet light targets cryptosporidium, a microscopic parasite that is the leading cause of waterborne illness in the United States. Cryptosporidium have an outer shell that allows them to live outside of humans and animals — and also makes them resistant to chlorine disinfection.
Right now about 2,500 gallons of water per minute are flowing through just one of three UV reactors in this plant. That’s less than a second of exposure for any cryptosporidium.

So how well is it working?

“We generally don’t do a lot of UV testing that isn’t required. We have this UV facility here as a barrier for cryptosporidium. The cryptosporidium test is quite expensive. So we haven’t actually tested it post-UV. We haven’t had any reason to at this point.”

Back outside the plant, in the warm sunshine, Sitka’s environmental superintendent Mark Buggins believes it’s better to be safe than sorry. Blue Lake was already a very clean source of surface water — even before the new EPA rules.

“Certainly you don’t know. If cryptosporidium is there and someone gets sick from it, you probably just don’t know. You get an upset stomach and diarrhea and attribute it to something else. Twice we’ve tested for cryptosporidium in Blue Lake’s water and found very small amounts — like one, out of a thousand gallons. So the dosage is really low. You need to drink more than one or two cryptosporidium spores to get sick. But the people who get affected — who you’re really protecting — are the immunocompromised, people who are on chemotherapy, people who are sick already, and dehydrated. It can really hurt you.” 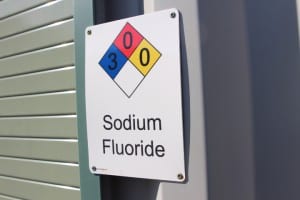 Both chlorine and fluoride are added to the water after UV treatment. (KCAW photo/Robert Woolsey)

Even at $8-million, ultraviolet disinfection was the lesser of three options for Sitka to comply with the Enhanced Surface Water Treatment Rule. Installing granular filtration — like a huge swimming pool filter — would have run to $24-million. Membrane filtration would have cost $46-million.

State grants paid for over $6-million of this project, the rest was covered by loans, and about $20,000 from Sitka’s water fund. Operating costs for the UV plant — including electricity bought from the city — will run about $360,000 a year.

Buggins says electrical engineers are integrating the computer controls of the UV plant and the existing water system. Soon, water employees will be able to control everything from a laptop — even at home.

For Buggins, who’s been running Sitka’s water for 26 years and has plans to retire, this is an intriguing possibility.

KCAW – Are you going to keep your password after you retire?
Buggins – Yeah. Maybe. They might want me to! (laughs)

And will UV treatment make Sitka’s water taste any different? Once the state has signed off on the new UV plant, Buggins says it likely will be easier to meet disinfection standards with lower amounts of chlorine — just enough chlorine to be detectable at the extremities of Sitka’s water system.