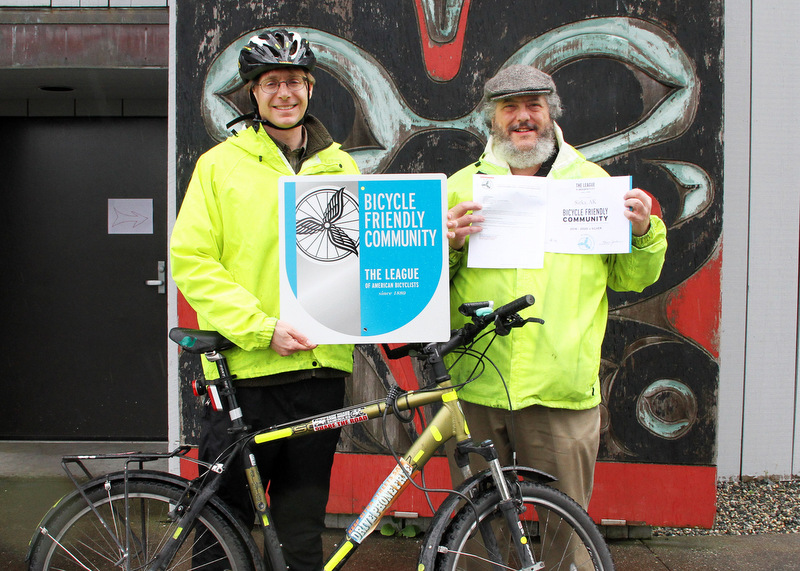 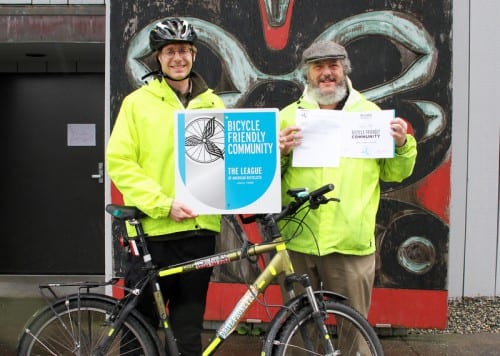 Doug Osborne and Charles Bingham, members of the Sitka Bicycle Friendly Community Coalition, pose with their silver-level designation. Sitka was the first community in Alaska to earn a bronze designation in 2008. (Photo courtesy of City of Sitka)

On Wednesday (5-18-16), the League of American Bicyclists designated Sitka a “Silver Level” Bicycle Friendly Community. Only 73 other communities in the United States have earned this honor, including Anchorage.

Sitka was the first city in Alaska to earn a Bronze-level designation in 2008 and again in 2012. In the past eight years, a lot has changed. The percentage of bike commuters in Sitka has doubled to 5.42%, which is well over national and state averages.

To improve safety for those in town, the coalition has implemented a host of programs, from youth camps to safety campaigns. The wintertime “Be Bright at Night” program distributed reflective tape and yellow vests to riders.

Bingham says there are material improvements too. The city has repaved main roads with wider bike lanes to accommodate the wave of cyclists, including Halibut Point Road, Granite Creek and No Name Creek Bridges. And just last week, the city added directional arrows on HPR to remind cyclists to ride on the right side of traffic.

Bingham attributes the popularity of bicycling to low traffic speeds and improved driver awareness, but reminds cyclists to be just as savvy as drivers when sharing the road. “We still have some ways to go. Some of it the cyclists need to do. We need to ride on the right. We need to make sure that if we’re riding at night we have headlights and taillights and we also need to be visible, but I appreciate the fact that the cyclists are getting a lot more help from drivers in terms of trying to make this a safe community.

Looking to the future, Bingham wants there to be even more accountability for personal safety. “I’d love to see the police stopping wrong way riders and telling them, ‘Hey, you’re supposed to riding with traffic. You’re not supposed to be riding on a sidewalk in the downtown area.’ Unless you’re a little kid, get off your bike and walk it. If you’re under eighteen, you’re supposed to have a bike helmet. Sometimes our enforcement has been pretty lax.”

Anchorage is also at the Silver Level as a Bicycle Friendly Community and Juneau at the Bronze Level.